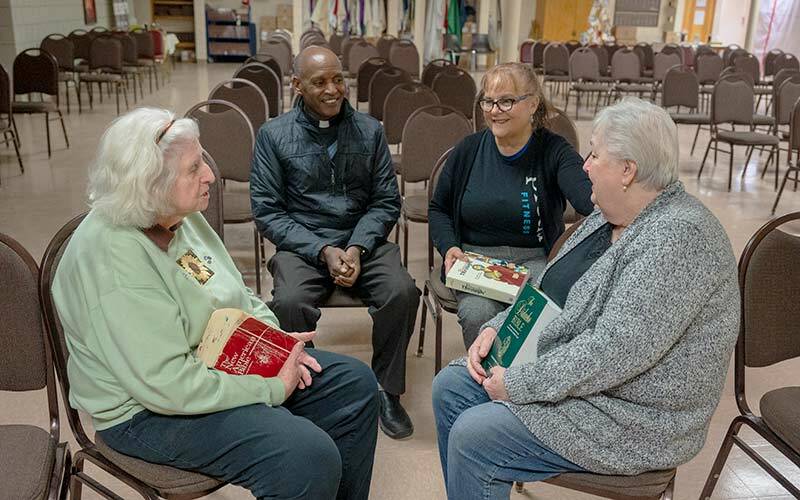 As a regular lector at Ithaca’s Immaculate Conception Parish, Mary Edsall-Golway is familiar with many biblical passages.

Yet it wasn’t until she took part in a recently concluded initiative — spanning an entire year’s time — that she engaged in the opportunity to digest every word of the Bible.

Edsall-Golway, along with a number of other Immaculate Conception parishioners, reached a milestone Nov. 30. That date marked the 365th and final daily installment of the parish’s Bible-in-a-Year project, during which all 73 books of the Catholic Bible — 46 in the Old Testament and 27 in the New Testament — were read in full.

Bible-in-a-Year was suggested by Immaculate Conception’s parish council based on input from council members Patricia Ober and Nancy Iacovelli, who each had previously read the entire Bible. The parish initiative began Dec. 1, 2021, featuring monthly lists of three readings per day. Ober noted that by spreading out the readings in such a way, the prospect of reading the entire Bible in 12 months “did not seem overwhelming, but rather comforting.”

First readings were derived from all but a handful of the Old Testament and New Testament books. Ober noted that the first readings did not follow their biblical order of appearance, but instead touched upon seasonal themes. For instance, Bible-in-a-Year kicked off in December with first readings from the Book of Isaiah rather than Genesis, due to Isaiah’s emphasis on awaiting and expectation that meshes with the chief themes of Advent.

The second daily readings this past year featured excerpts from Psalms and Proverbs that were arranged in order. The third readings were from the four Gospels, also done in order, covering a six-month block and then repeated.

Iacovelli said she preferred Bible-in-a-Year in comparison to when she read the Bible in exact order a few years ago.

“Doing it again this year, with this format, was much more inspiring,” she said. “I got a lot more out of it this year, as the format allowed me more insight.”

Participants did daily Bible readings on their own time

Bible-in-a-Year wasn’t conducted in a formal group setting; rather, it was designed as a self-guided study that could easily be done from home. For instance, Edsall-Golway said she was able to include in the initiative a homebound person to whom she brought holy Communion.

Ober noted that over the past year, participants often discussed the day’s readings when they saw each other after Mass — including Father Augustine Chumo, pastor of Immaculate Conception Parish.

Ober added that each day’s material could be covered in less than 10 minutes and was best approached by establishing a daily reading routine, perhaps as part of morning prayer or at bedtime. She said Immaculate Conception Parish provided one-page bulletin inserts that listed each month’s daily readings, and that the entire year of readings is still available on the parish website for people who wish to do Bible-in-a-Year on their own.

Iacovelli called her participation in Bible-in-a-Year “a great experience” that she found highly rewarding. Edsall-Golway also gave it a big thumbs-up, saying that “reading the entire Bible gave me a fuller understanding of the parts that I read as a lector.”

Asked why this intense, yearlong focus is important, Ober cited a quotation from St. Jerome: “Ignorance of Scripture is ignorance of Christ.”

For people who do not wish or are unable to make such an extensive commitment, Iacovelli recommended Consecration to St. Joseph by Father Donald H. Calloway. The book follows a 33-day commitment and, according to Iacovelli, contains “many, many Bible stories and inspirational quotations from the Bible.”

Meanwhile, Ober said people who weigh the possibility of engaging in Bible-in-a-Year should not be deterred by the possibility of missing a few days’ readings; they should just make them up when possible. She said that what’s most important — even for people who carry out all their daily readings — is to grasp the spiritual meaning of what they’re reading.

Tags: Catholic Beliefs, Tompkins County News
Copyright © 2023 Rochester Catholic Press Association, Inc. All rights reserved. Linking is encouraged, but republishing or redistributing, including by framing or similar means, without the publisher's prior written permission is prohibited.