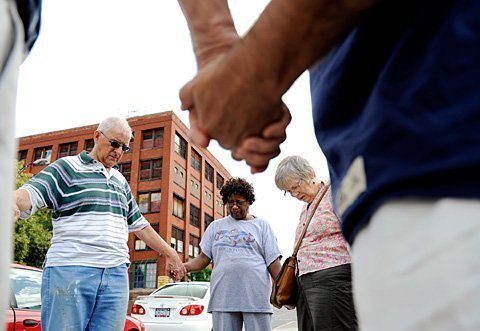 Bob Warth (from left), Annie Robertson and Mary Lu Coffey pray during a June 26 vigil near the spot on Rochester’s Central Avenue where two men were killed June 24. Deacon Bill Coffey has organized such vigils at homicide sites for the past 15 years.

EDITOR’S NOTE: This is the conclusion of a two-part series on racism and racial justice.

ROCHESTER — Bright noontime sun shone down on an industrial area on Central Avenue, casting dark shadows on the sidewalk June 26.

A group of people of faith stood in a circle praying for two men who were shot near there a few nights before.

Deacon Bill Coffey, who has organized hundreds of such vigils at the scenes of homicides over the past 15 years, named the men killed and prayed, "Take these young men into your hands and into your heart."

Others prayed for the grieving parents and families of the men. They prayed that God would touch the hearts of the perpetrators of the crime. They prayed that the neighborhood would heal from the violence in its midst.

Yet that violence would again erupt the next day, as a Rochester police officer was shot and wounded during an investigation into the two men’s deaths.

After the vigil, a longtime friend of one of the victims said his mother deeply grieved her son.

"These folks don’t even get a couple lines in the paper, and they are God’s sons and daughters," Deacon Coffey said after the vigil. "We gather to spend time in prayer."

"I try to get to as many of (the vigils) as I can, even though it’s depressing," remarked Bob Warth, a parishioner of Church of the Assumption in Fairport. "We’ve got to figure out what it is that can be done" to stop the violence.

Deacon Coffey, who for many years has been working and praying for peace with other social-justice advocates, said he believes Rochester’s violence is fueled by inequality.

Mich said a parable is often used to explain the difference between social justice and charity. It goes something like this, he noted: A man was by a river and happened to notice a dead body floating in it. The man was shocked, but fished the dead body out of the river and gave the deceased a proper burial. The next day, another body was floating in the river, and another, and another. The entire town was enlisted to help with the rescue and revival of some and the burial of others. Eventually, someone devised a more efficient way to recover bodies from the river. The bodies kept coming, however, until someone suggested looking upstream to find out why so many people were ending up in the river.

Charity, Mich explained, was performed by the people who pulled the bodies out of the river. Social justice was done by those who looked upstream.

Both are necessary, he said.

"The church leadership has been involved and influential in issues of racial disparity," he said.

Churches were among the organizations that were involved in local conversations on racial disparity centering around this spring’s exhibit "Race: Are We So Different?" at the Rochester Museum and Science Center. The community foundation — which was a primary sponsor of the exhibit — teamed up with the museum, Action for a Better Community and an array of other organizations to create the initiative "Face Race, Embracing Equity." An action plan on fighting racism will be released in the fall.

Miller said statistics on infant mortality — death among infants from birth through age 1 — provide another stark example of disparity. Infant mortality rates in Monroe County were 3.4 percent for white infants, 14 percent for African-American infants and 16.3 percent for Latino infants. He pointed out these disparate rates occur amid the same health-care systems and the same, theoretical, access to care.

"A 14-percent mortality rate is more of a Third World kind of number than one for a community like Rochester," Miller observed.

He said the community should work to direct more funding to prevention-focused programs, such as the Nurse Family Partnership, which pairs nurses with at-risk pregnant and parenting women to promote proper prenatal care, full-term births, and skillful parenting.

"Every dollar we can spend to reduce the chances of having a low-birth-weight baby saves hundreds of dollars," Miller said.

The Nurse Family Partnership was brought to the area partly through the effort of the Children’s Agenda, which advocates for funding child-focused programs that have proven track records of success.

Brigit Hurley, a policy analyst with the Children’s Agenda, noted that infant mortality is often used as an indicator of a society’s overall health. Speaking May 10 to an interfaith coalition of churches called Project URGE, Hurley said the biggest factor affecting the mortality rate for children in their first year is poor health care received by their mothers. She noted that in the city of Rochester, 55 percent of children live in poverty.

Hurley called for public funding to be directed to such programs as the Nurse Family Partnership that can demonstrate that they improve outcomes for children.

"We have a chance to make a difference," Hurley said. "We can change things."

One of the first steps churches can take to get involved in fighting social inequities is by developing relationships with other churches, said Garry Manuel, director and founder of Project URGE (Urban Revitalization God Experienced). One of the aims of his organization is to break down walls between urban, suburban and rural churches so they can work together to address such social issues as poverty and racism.

Though Project URGE has long facilitated church partnerships and also hosts a Diversity Café in which people share their perspectives on diversity, Manuel said the programs have been slow to take off.

"The difficulty is really to get everybody who needs to be at the table to the table," he remarked.

Manuel said face-to-face conversations have been most effective in breaking down barriers and mistrust that exist among people of different racial and ethnic backgrounds. He recalled the pained perspective of one woman of a mixed ethnicity whose features led her to be treated differently than her sister. The woman’s story was eye-opening for her listeners, he said.

"When people get to know one another and are involved in one another’s stories, they have a better perspective and that helps erase preconceived ideas about race," Manuel said.

Churches need to fight racism on a broad-based level, he said.

"I really believe churches need to be more intentional about creating multicultural churches," Manuel said. "I believe it’s going to be more imperative in regard to how our community is engaging in ministry, the stability of churches and also eradicating poverty."

Mich said several Catholic parishes recently committed to engaging in social justice by helping to form a new group called Rochester ACTS (Alliance of Communities Transforming Society). The group comprises five Catholic parishes — Fairport’s Church of the Assumption and Rochester’s Peace of Christ, the Cathedral Community, St. Mary and St. Frances Xavier Cabrini parishes — as well as the Friends of St. Bridget and the Service Employees International Union. Mich said the group hopes to involve at least 20 churches across racial and sectarian lines to formulate a list of issues to address.

"Our work there is trying to build bridges of trust between different faith communities," he said. "I think a lot of parishes would love to be a part of that."

Though its agenda is not yet set, Rochester ACTS most certainly will tackle issues of power and inequality, said Bill Pickett, the volunteer social-ministry coordinator for St. Mary Parish.

"Most of us, most of the time, don’t share any power, as opposed to the powers that be," Pickett said. "Through faith-based community organizing, people can take actions in the public advocacy arena with specific issues that have not yet been determined."

The advocacy of the groups in Rochester ACTS will be guided by the problems the groups see and the information they learn through their existing charitable ministries, Pickett said.

For example, St. Mary Parish has for about a decade operated a homeless outreach ministry and has recently recruited additional urban and suburban parishes to help staff and fund the ministry.

Volunteers search for homeless people in Rochester at night and offer them hygiene kits and food. Volunteers also offer a hotel room for the night if the homeless person agrees to speak to a social worker in the morning. The social worker’s aim is to connect homeless people with available services and help solve any problems — such as the lack of a birth certificate — that they may have in accessing social services.

"Almost all of (the homeless) qualify for benefits, but they have gotten so distant from social support services, and they lack trust," Pickett observed.

Many homeless people have active drug or alcohol addictions, which further distance them from assistance since few shelters accept those who are not sober, he said. Yet Pickett noted that it is difficult for people to focus on sobriety if they are worried where they are going to sleep at night.

That is another problem being addressed by St. Mary and the shelters the House of Mercy and St. Joseph’s House of Hospitality. Together the three Catholic ministries are working to create the Dorothy Day House, a new "wet" transitional housing building that offers temporary shelter as people work to kick their addictions.

Addiction is not the only reason why people are homeless, Pickett said, citing mental illness, job loss and foreclosure as additional causes. He said St. Mary’s homeless outreach also has connected with young men who were recently released from jail and having trouble fitting in to society again.

"(Ministry to the homeless is) like anything else," he said. "When you begin to have contact with a group that you think of as ‘the other,’ you realize you are all human beings. There’s not a whole lot of difference between you except that life made different turns. It’s not hard to imagine how somebody could end up there."

Suggestions for parishes and individuals to help create equity:

* Get active in parish-based social-justice ministry.

* Pray at homicide prayer vigils in the Rochester area or organize them in your area. To receive e-mail notifications about Rochester vigils, e-mail moconnor@dor.org.

* Take part in discussions on inequality. Church of the Assumption, 20 East Ave., Fairport, has scheduled such a discussion for 7 p.m. July 9 featuring Ruth Marchetti, social-ministry coordinator for Catholic Family Center. Brigit Hurley of the Children’s Agenda will speak at Assumption on the challenges facing Rochester’s children at 7 p.m. July 22.

* Review the detailed recommendations in The State of Black Rochester 2013, which is available in local bookstores, and take part in upcoming Facing Race, Embracing Equity events.

* Participate in anti-racism efforts and discussions that happen throughout the year, such as the annual Stand Against Racism in April, and Project URGE’s Diversity Café, an anti-racism discussion group.

* Form a team at your parish to host and support homeless families staying at churches through the Rochester Area Interfaith Hospitality Network. For information, contact Nancy Elliott at 585-506-9050.

* Support Catholic Charities and other agencies in your area.