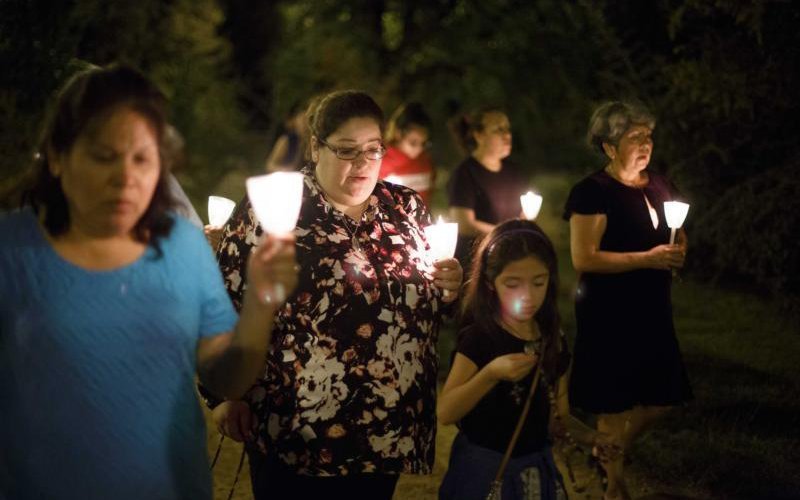 Worshippers participate in a rosary walk Sept. 23 at St. William Catholic Church in Greenville, Texas. For more than four years, the church's parishioners and others from far beyond Texas have gathered nightly for a outdoor Bible study and rosary procession. High participation was expected for the Oct. 13 rosary walk marking the 100th anniversary of Our Lady of Fatima's apparitions.

GREENVILLE, Texas (CNS) — For more than four years, parishioners of St. William Catholic Church in Greenville and some Catholics from far beyond Texas have gathered nightly for a 9 p.m. outdoor Bible study and rosary procession honoring Our Lady of Fatima.

The parish had a particularly high turnout for the Oct. 7 feast of Our Lady of the Rosary, and Father Paul Weinberger, pastor of St. William since 2004, expected high participation as well for Oct. 13 — the 100th anniversary of the last of the six Marian apparitions at Fatima, Portugal.

The parish is celebrating the centennial of Our Lady of Fatima’s appearances to Sts. Jacinta and Francisco Marto and Lucia Santos and marking St. William’s 125th anniversary this year by not letting an evening go by without opening wide the church doors and processing across the street to a foliage-shrouded park for what has become a beloved tradition.

Greenville, with a population of about 27,000, is 50 miles northeast of Dallas.

“By 9 p.m., it is dark and the people of Greenville see the front doors of the church wide open,” said Father Weinberger, who inaugurated the candlelight rosary walk June 15, 2013.

“The light of the church pours out into the street,” he told The Texas Catholic, newspaper of the Dallas Diocese. “The flame from the sanctuary lamps is taken outside to light the candles that the people are holding. People passing by say, ‘What’s happening at the Catholic church?’ We are getting noticed.”

Father Weinberger, whose parish has an average Sunday attendance of 700, also oversees Our Lady of Fatima Catholic Church — the quasi-parish in Quinlan that is the Diocese of Dallas’ only church of that name.

October is the month of the rosary, but Father Weinberger initially told St. William parishioners that he would continue the nightly rosary procession through the end of 2017. He recently broke the news to parishioners that the tradition will continue through Dec. 12, 2031, to prepare for and commemorate the 500th anniversary of Our Lady of Guadalupe.

Father Weinberger said that if he had told parishioners when he launched the nightly outdoor rosary in 2013 that it would continue through 2031, it might have overwhelmed them.

He said that those who are unable to drive at night are invited to pray the rosary at home simultaneously with those in the outdoor procession.

In severely inclement weather, the nightly rosary is prayed inside the church, where the statues include one of Our Lady of Fatima and of others that played a part in the final apparition on Oct. 13, 1917 — Our Lady of the Rosary; the Holy Family; Our Lady of Mount Carmel; St. Joseph and the Baby Jesus; and Our Lady of Sorrows.

Both said that it gives them joy to see families praying the rosary together.

“In the first couple of years, I only missed participating in the rosary maybe a dozen times,” said Bill, who is retired from the Air Force. “I was having some cancer problems, and I’m convinced in my heart that the rosary helped. It’s a beautiful walk. It’s part of people’s routine. It’s a community feeling.”

He said that anywhere from a dozen to 100 people of all ages participate in the nightly tradition, during which they pray while walking on an oval path around bronze statues of Our Lady of Guadalupe and St. Michael the Archangel in the park.

Bill recalled only one cancellation of the rosary procession, on a night of perilously icy roads.

“I’ve never seen a priest as dedicated as Father Weinberger,” Sharon said. “He has attributed many blessings as having come out of this rosary. It’s been a very rich and rewarding experience.”

Harasta is on the staff of The Texas Catholic, newspaper of the Diocese of Dallas