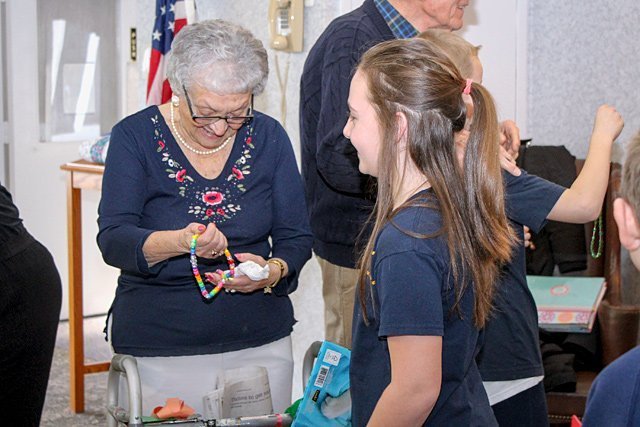 HORSEHEADS — If goodwill gestures could ever be graded for their impact, then a group of students from St. Mary Our Mother School most definitely aced a service project they performed this past winter.

On Feb. 2, the school’s fourth-graders paid a visit to Courtyards at Bethany Village, a nearby assisted-living facility, as part of their Catholic Schools Week roster of activities. There, they presented senior-citizen residents with rosaries they had personally designed and created.

This initiative by teacher Heather Bill’s class had originated with the students assembling the rosaries by hand at the school. Each youth was charged with securing beads onto strings, getting to design his or her own colors and patterns. For instance, Olivia Gavin opted for a rainbow array of beads, while Riley Murray went with all purple.

“The hardest thing was probably counting to 10,” remarked Coleen Bukowinski, the school’s marketing and publicity coordinator, referring to the amount of beads required to complete each of five rosary decades for which Hail Marys are recited.

Regarding the overall process, “At the beginning it was hard, but as it went on it got easier,” said Jack Fesetch, one of the fourth-graders.

Upon completing their rosaries, the students brought them over to St. Mary Our Mother Church where Father Christopher Linsler, pastor, blessed them. However, Bukowinski noted, rather than have the youths stop at making rosaries, the idea to bring them out into the community had been raised by Jean Yorio, principal of the Chemung County school for grades prekindergarten through 6.
That idea was realized on a memorable Thursday, when the class gave over its creations to an appreciative group of Bethany Village residents. Also as part of the service effort, St. Mary Our Mother’s fourth-graders presented keepsake drawings they had made of happy settings. Jack depicted a day at the beach, whereas Olivia drew a waterfall and Miles Woodhouse and Riley opted for sunsets.

“All of them smiled and were happy,” Olivia said of the recipients.

“They were very grateful,” Riley added.

The rosaries were not simply dropped off, but instead were the focal point of some quality time spent in prayer. Students and adult chaperones gathered with the senior citizens to recite the rosary together, with young folks leading the prayers while residents held their newly acquired rosaries.

Miles said the experience at Bethany Village served to remind him that there are people in the community who can’t easily get out and about the way they once did, and thus are grateful for being remembered.

“I think they were just happy that someone as young as us would come see them and do this for them,” he said.

Bukowinski observed that the memories created that day have been long-lasting. When she made a subsequent stop at Bethany Village, she said, several residents were still talking about that early February get-together with their St. Mary Our Mother visitors. Riley, meanwhile, said she learned that the man to whom she gave her purple rosary happens to love that color and has taken to praying daily with it.

Not only were the senior-citizen residents profoundly affected by the rosary project, but the fourth-graders were as well.

“I still think about it,” Olivia noted, saying along with her classmates that it felt good to know their acts of kindness made such a positive difference.

When asked if they’d like to go back at some point and reunite with their new friends, Olivia, Jack, Miles and Riley all quickly nodded their heads.
“I would love to,” Riley stated.