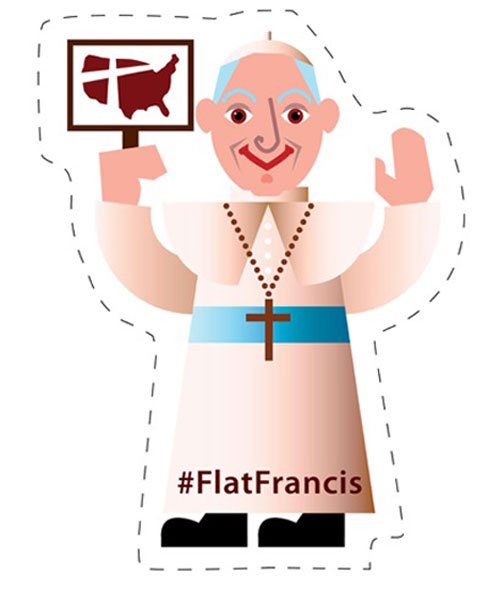 Pope Francis is visiting North America for the first time in September. We want the Diocese of Rochester to give him the BIGGEST welcome! Based on an idea and graphic from Catholic Extension, the Catholic Courier is sponsoring a #FlatFrancis contest. We want to gather as many #FlatFrancis pictures as possible from our diocese, as well as the MOST CREATIVE ones. Here are the details of the contest:

Similar in concept to the "Flat Stanley" series of children’s book, #FlatFrancis was conceived by Catholic Extension in Chicago as a way to welcome Pope Francis to the U.S. People across the country have been taking pictures with Flat Francis and posting them on social media, using the hashtag #FlatFrancis.

1. Print and cut out the Flat Francis picture here.

2. Take a picture with Flat Francis. Be as creative and original as possible.

-Your full name
-Where the photo was taken
-Who is in the photo
-What parish you belong to (Although anyone can post a photo with Flat Francis, this contest is only open to those who belong to a parish within the Diocese of Rochester, New York.)
-The hashtag, #FlatFrancis
-Tag Catholic Extension in your post

4. Only one entry per person

6. If you have any questions, e-mail gcapellazzi@catholiccourier.com

1. Starting Aug. 10, head to the Catholic Courier’s website to vote for the photo you think is the most creative. Although submissions also will be posted on Facebook, voting will take place exclusively on the website!

3. The first-, second- and third-place winners will be announced on Aug. 24.

All entries will be featured in a collage in our September print edition.

The winner’s submission will be prominently featured in the center of the collage. Prizes also will be awarded for first-, second- and third-prize winners.