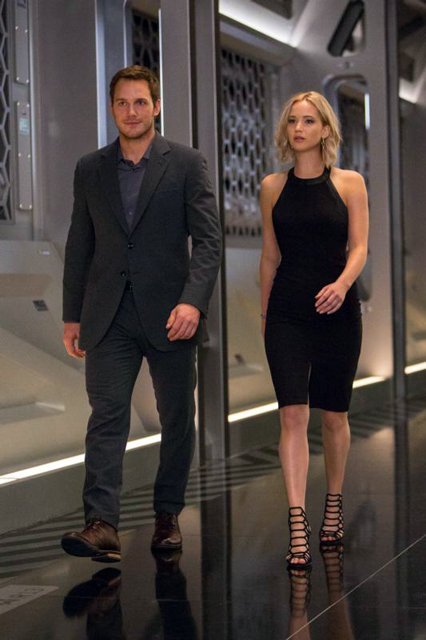 Chris Pratt and Jennifer Lawrence star in a scene from the movie "Passengers." The Catholic News Service classification is A-III -- adults. The Motion Picture Association of America rating is PG-13 -- parents strongly cautioned. Some material may be inappropriate for children under 13.
By John Mulderig
Catholic News Service
NEW YORK (CNS) — Science fiction becomes the springboard for a study of selfishness, sin and the possibility of forgiveness in "Passengers" (Sony). While this tale about a transgression born of desperation will resonate with romantics, it may leave others cold.
Engineer Jim Preston (Chris Pratt) is one of more than 5,000 passengers on a spaceship bound for a distant colony planet. Since the journey will take 120 years, Jim — along with everyone else on board — has been put into suspended animation.
Instead of waking up shortly before arrival, however, Jim comes to 90 years prematurely. After discovering that there is no way to get back into hibernation, Jim faces the prospect of living out the rest of his life in solitude — his only real companion on the vessel is Arthur (Michael Sheen), an android bartender.
Jim’s loneliness eventually becomes so extreme that he awakens Aurora Lane (Jennifer Lawrence), an author whose background and writing he has studied and for whom he has fallen.
Screenwriter Jon Spaihts and director Morten Tyldum take a big risk by having their protagonist essentially ruin the life of the woman he loves, then try to keep that fact a secret. But at least some viewers will appreciate the complicated emotions to which this situation gives rise and the skill with which both leads convey them.
Suspense is thrown into the mix as well since the malfunction that victimized Jim turns out not to be an isolated incident.
Predictably, Jim and Aurora’s relationship turns sexual long before we discover whether they will end up walking into the sunset together. And, in a scene played for laughs, Jim takes advantage of his isolation, pre-Aurora, to walk down the hallways with a towel covering him in front but not behind.
On a deeper level, though, opinions will be divided over Jim’s irrevocable trespass against Aurora. While "Passengers" plays out the consequences intriguingly and warmheartedly, at least some viewers will reject its premise from the start. Moviegoers of faith will have to determine whether the principle that there is no offense too grave to be forgiven, provided the wrongdoer is genuinely repentant, applies on the big screen as well as in real life.
The film contains two premarital encounters, one of them semi-graphic, a couple of glimpses of rear nudity in a nonsexual context, a pair of mild oaths and a single crass term. The Catholic News Service classification is A-III — adults. The Motion Picture Association of America rating is PG-13 — parents strongly cautioned. Some material may be inappropriate for children under 13.
– – –
Mulderig is on the staff of Catholic News Service.
Copyright © 2022 Catholic News Service, Inc. All rights reserved. Linking is encouraged, but republishing or redistributing, including by framing or similar means, without the publisher's prior written permission is prohibited.