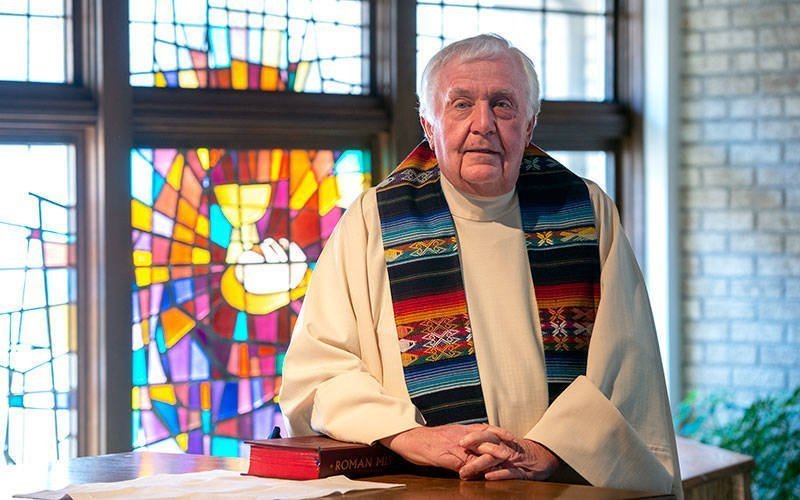 Father Michael Bausch is no stranger to social ministry.

Over the course of his 42 years as a priest, he’s not only been heavily involved with various Catholic Charities agencies and mission work in impoverished areas, but he’s encouraged his parishioners to become involved as well. And he admits that it’s unlikely his involvement in social-ministry efforts will end when he reaches senior-priest status this June.

Growing up, Father Bausch and his family were actively involved in St. Mary Parish in Batavia. He attended the parochial school, where his mother was a teacher, and his father was involved with St. Jerome Hospital, also in Batavia. Both parents also were very active with their local Catholic Charities agency, and their work made an impression on him, he said.

“I just saw the appreciation for it and the need for it,” he remarked.

After graduating from high school, Father Bausch went to St. Bernard College in Cullman, Ala., which was operated by Benedictine monks. He said he was inspired by the monks’ outreach to the poor.

The seed of his future vocation was already planted by the time he earned his bachelor’s degree in personnel management. After graduating, he took an executive position with the Boy Scouts of America in Corning, but the seed continued to grow.

“It really kind of blossomed during the great days of the renewal movements of Cursillo and Marriage Encounter. I was particularly involved with Cursillo. That was kind of the inspiration,” Father Bausch said.

He resided in Becket Hall for one year while taking philosophy courses at St. John Fisher College in Pittsford and working for the diocesan Office of Human Development, then entered St. Bernard’s Seminary in Rochester in 1973.

He was ordained by Bishop Joseph L. Hogan April 27, 1979, at St. Ann Church in Hornell, where he’d been a deacon intern. He then served as priest intern at St. Patrick, Seneca Falls, from 1979-82 and co-chaplain at Strong Memorial Hospital from 1982-83. He served as director of the Southern Tier Office of Social Ministry — a precursor to Catholic Charities of the Southern Tier — from 1983-85 before coming back to Rochester to oversee development of the agency that eventually became Catholic Family Center.

There he found many who shared his passion for social ministry. The parish boasts many outreach ministries and a large community garden, and also has been involved with mission work in Booneville, Ky., and El Salvador.

These outreach efforts have been among the highlights of Father Bausch’s ministry, as have interactions with parishioners, he said. He added that he deeply appreciates the support he’s received from all of the faith communities he’s worked with.

After leaving his pastorate in June, Father Bausch plans to remain involved with the boards of directors of several Catholic Charities agencies and the Association of United States Catholic Priests. He also plans to start helping at a local parish in the fall.