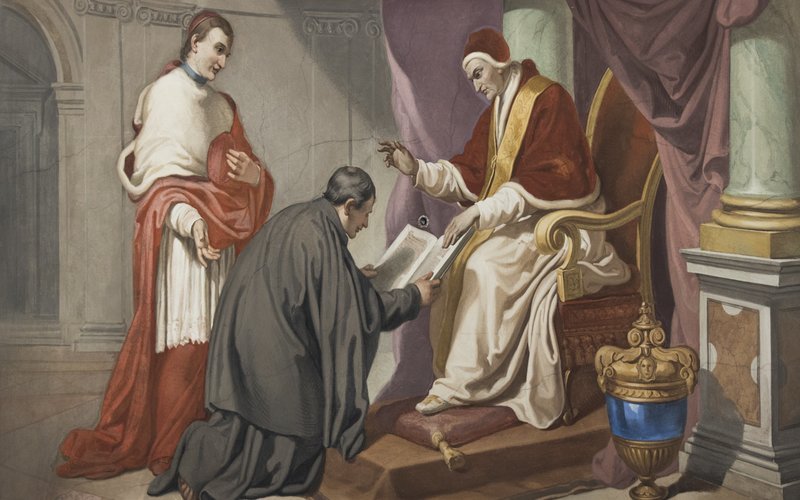 ROME (CNS) — The Passionist Fathers will commemorate the 300th anniversary of their founding with a jubilee celebration centered on renewing the commitment to proclaiming Christ’s Passion as a sign of hope and love for humanity.

In a statement released Nov. 18, the congregation said the celebration will begin with the opening of the Holy Door at Rome’s Basilica of Sts. John and Paul followed by a Mass presided by Cardinal Pietro Parolin, Vatican secretary of state.

The date of the Mass, Nov. 22, marks the day when St. Paul of the Cross, founder of the Passionists, “abandoned his commercial activity, and began a 40-day retreat in a cell of the church of San Carlo in Castellazzo during which he wrote the rule of the future congregation,” the Passionists said.

The jubilee celebration will conclude the same day the founder ended his retreat 300 years ago on Jan. 1.

In a message to the Passionists Nov. 19, Pope Francis urged members of the order to honor the crucified Christ by ministering “above all, to the crucified of our time: the poor, the weak, the oppressed and those rejected as a result of the many forms of injustice.”

Fulfilling that mission, the pope said, will require prayer and a closer relationship with Jesus. “Only one who is crucified by love, as Jesus was on the cross, is capable of helping the crucified of history with effective words and actions.”

“In fact,” the pope said, “it is not possible to convince others of God’s love only through a verbal and informative proclamation. We need concrete gestures that help them experience this love through our love.”

Although the COVID-19 pandemic has prevented any other public celebrations to mark the jubilee, the congregation will host an international congress at Rome’s Pontifical Lateran University that will reflect on the theme, “The wisdom of the cross in a pluralistic world.”

While the current pandemic “has impeded or postponed pilgrimages and meetings of the Passionist family, the jubilee maintains its value of personal commitment to renewal,” the congregation said.

“Indeed, the grace of the jubilee is to offer a new beginning, and new opportunities for a fulfilling life,” the statement said. “If the explosion of COVID-19 has made us say, ‘Nothing will be as it was before,’ the jubilee offers us energy so that ‘nothing will be as it was before’ because everything is renewed on personal and social levels, as Pope Francis desires.”

According to its website, the Passionist Fathers first arrived in the United States in 1852, when “there were only 31 states.” Since its founding, the congregation has spread to 63 countries across five continents.