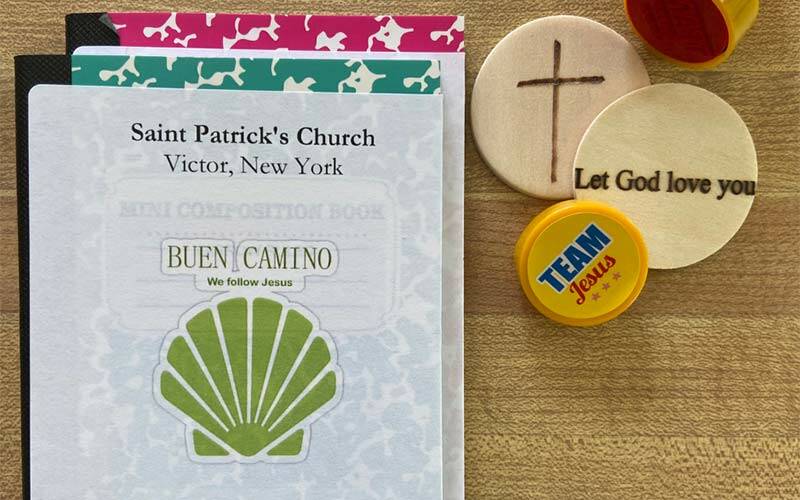 In June, St. Patrick Parish in Victor distributed more than 200 notebooks for parishioners to use to complete spiritual exercises as part of a Eucharistic Revival pilgrimage. (Photo courtesy of Father Edison Tayag)

Parishioners at a Victor church recently embarked on a pilgrimage. Their destination? A closer relationship with Jesus in the Eucharist.

Many members of St. Patrick Parish in Victor have opted to treat the three-year National Eucharistic Revival, which opened June 19, as a pilgrimage. The bishops of the United States called for the revival with the intention of renewing Catholics’ belief in and devotion to the real presence of Jesus in the Eucharist. This Eucharistic Revival is a good way to invite parishioners to deepen or rediscover their relationship with Christ in the Eucharist, added Father Edison Tayag, pastor at St. Patrick.

Pilgrim’s passports inspired by ‘the Camino’ — the Way of St. James

To encourage this relationship-building, the parish distributed more than 200 notebooks emblazoned with the words Eucharistic Revival Pilgrim’s Passport in mid-June. Every week or two, pilgrims are asked to complete spiritual exercises and write about them in their notebooks, and, after doing so, they may stamp their passports using special stamps available inside the church.

“The idea came from the Way of St. James in Spain,” Father Tayag explained.

For centuries, Christian pilgrims have made this pilgrimage from various locations in Europe to the cathedral in Santiago de Compostela, Spain. They walk the route, carrying their supplies in backpacks and sleeping in hostels. Each traveler carries a pilgrim’s passport, which is stamped at each town along the way to Santiago de Compostela.

Father Tayag walked the Way of St. James, often referred to as “the Camino,” in 2013 and thought a pilgrim’s passport similar to the one he used might help his parishioners journey through the Eucharistic Revival. Such a passport identifies its holder as a person taking a spiritual journey, and someone who is “intent on going to heaven, led and guided by Jesus, and has chosen to journey with fellow Christians. Therefore, the passport may serve as a personal journal of a soul on the way to God,” he wrote in a June 26 bulletin column.

Each pilgrim’s spiritual journal will be a record of the steps a pilgrim took to grow stronger in the virtues of faith, hope and love.

“The liturgy committee and I are thinking that maybe every other week we can propose an activity that’s related to the Eucharist or the parish community. For example, for the first task parishioners were invited to think about goals that they can set for themselves or their families that will just allow them to deepen their relationship with Christ and the Eucharist,” Father Tayag told the Catholic Courier.

The second spiritual exercise, which Father Tayag suggested in his July 10 bulletin column, invited parishioners to get to know their companions on the journey.

“If you do not know the name of a person who sits next to you on Sunday, please introduce yourself and share with this person something about you,” Father Tayag wrote in his column. “Also, ask if you can take a selfie of yourselves together. See if this person has any concern that he or she may want you to pray for. Let your selfie remind you to pray for your fellow pilgrim and his/her prayer intention.”

Father Tayag is hopeful that the process of taking concrete steps and recording them in the passports will help keep parishioners’ attention focused on the Eucharistic Revival throughout the next three years and beyond, he said.

The passports are not the only tool the parish is utilizing to keep parishioners engaged in the revival, however.

Since early June, the parish has distributed 800 small wooden discs that are meant to represent Communion hosts. Parish staff purchased the 800 blank discs from Amazon and used a wood-branding machine to put a cross on one side of each host and the words “Let God love you” on the other side.

The idea for the wooden hosts stemmed from a popular practice of carrying a small wooden cross or a single old-fashioned nail in one’s pocket during Lent to inspire frequent prayer, Father Tayag said.

“The wooden host is serving the same purpose. People can carry them around and be reminded of Jesus in the Eucharist,” he explained.