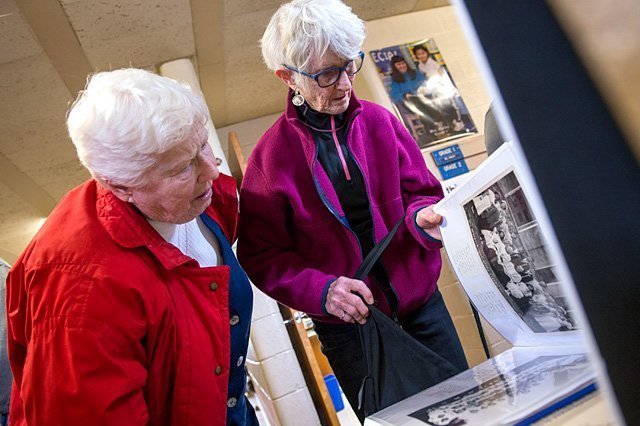 Jeannine Clark (left), Class of 1941, and Therese LeGro, Class of 1950, look over a yearbook during an alumni weekend at St. Michael School in Penn Yan Nov. 5.

The world has changed quite a bit since Conrad Tunney graduated from St. Michael School in 1945, but the school’s reputation in the Penn Yan community has remained the same, according to Tunney, 85.

More than 75 years ago, his parents chose to send him and his two sisters to St. Michael School because they recognized the value of a "good solid Christian education," and because they were aware of the elementary school’s reputation for churning out students who went on to do well in high school, Tunney said.

Three decades later, Winona Flynn said her parents chose to send their six daughters to the school for much the same reasons. 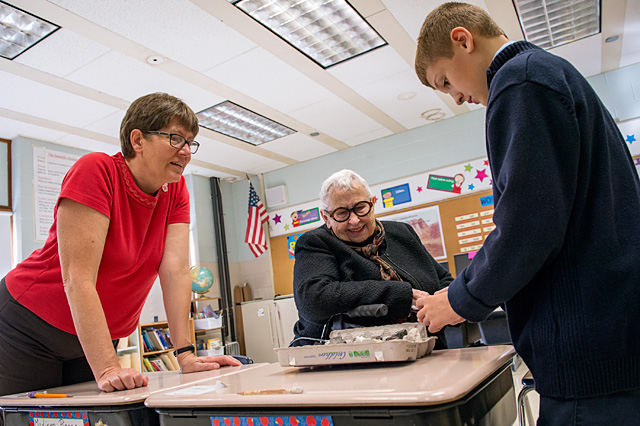 "I think they felt the school educated the entire child, which it still does today," said Flynn, who attended the school in the late 1960s and early 1970s.

Tunney and Flynn are two of the approximately 90 alumni who participated in St. Michael School’s Alumni Gathering, which was held Nov. 5-6. The first day of the gathering featured tours of the school, led by current St. Michael students, and a cocktail hour at a local restaurant. The next day, alumni were invited to participate in Sunday Mass at St. Michael Church followed by breakfast downstairs in the church hall.

"It was absolutely wonderful," Flynn said of the two-day event.

The cocktail hour was one of the highlights of the weekend for Flynn, who enjoyed poring over the old yearbooks, class photos, report cards and other St. Michael School memorabilia present at the event. Flynn said it was fun to look for relatives in the old photographs, some of which dated back to the early 1900s, and to see the different iterations of the school uniforms over the years. Another highlight was the tour of her old stomping grounds.

"One of my grandnephews was my tour guide. I thought it was very sweet to have the students do the tours," said Flynn, whose grandnieces and grandnephews represent the fifth generation of her family to attend the school.

Alumni of all ages attended the gathering, which to Flynn shows the love that alumni have for their alma mater and their desire to keep the school open.

The gathering was held not to raise money, but to raise awareness of the school and build a sense of community among its many alumni, according to Thomas Flood, principal at St. Michael.

"The number one goal is to renew old relationships and show what the school is doing today, and also have some fun. We just want to let people know that the school is still in existence. We want to establish a stronger alumni organization," he explained.

St. Michael School, which this year is celebrating its 135th anniversary, is a vital part of the Penn Yan community, Flood noted. The school’s long history of being a valued part of the community inspired Alan Lefco to start volunteering at the school 25 years ago, and he is still an active volunteer. His most recent task was to compile a list with current contact information for as many St. Michael graduates as he could find, and the resulting list was used to invite former students — including many who no longer live in the area — to the recent Alumni Gathering.

Although Lefco is not a St. Michael alum, he is a strong supporter of the school’s mission. The school’s students participate in a variety of community projects throughout the year, and this participation helps them learn about social responsibility and Christian morality, he said.

"Those two things will last you a lifetime. Just because you did swell in fifth grade in math or English language arts, that’s nice, but that’s not what will last you for life or be the most important thing," Lefco said.

Catholic and non-Catholic parents alike send their children to St. Michael because they want their children to receive a solid foundation in those intangible moral qualities, agreed Tunney, who occasionally volunteers at the school.

"It’s a real asset to the community," Tunney said. "The youngsters that are there learn to volunteer and do good works for the community. The emphasis is a little different than it is in some of the other schools. I just think the approach (develops) real solid citizens."