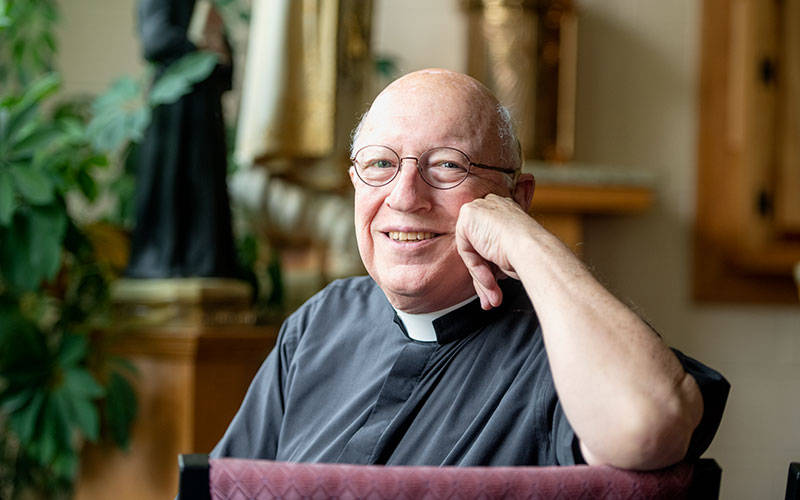 HILTON — There’s nothing unlucky about Friday the 13th as far as Father Joseph Catanise is concerned.

As it turned out, his most recent Friday the 13th — in August — was one of the most fortunate days of his life. That’s when Father Catanise learned his body was free of the prostate cancer that had plagued him for several months.

Yet although he’s eager to move on from his ordeal, the longtime pastor of Hilton’s St. Leo Parish emphasized that his awareness-raising efforts —- in particular, imploring more men to get screened regularly — will continue in earnest.

Father Catanise acknowledged that he initially kept quiet about his diagnosis, but he gradually learned of more and more personal contacts who had become seriously ill and/or died from prostate cancer. That knowledge spurred him to become an advocate for prevention and early detection of prostate cancer — which, according to the American Cancer Society, is the second-leading cause of cancer death in American men, behind only lung cancer.

“I just said, ‘You know, I just can’t keep silent.’ It’s embarrassing, yes,” Father Catanise remarked, explaining that because prostate cancer and its side effects involve the body’s genitalia, “it’s a pretty private kind of thing. But if I can help one man, then it was worth the embarrassment.”

Father Catanise’s bout with the disease had begun innocently enough; he said that a physical in October 2020 yielded no cause for concern. But about a week later, when a physician friend asked if he’d gotten a prostate-specific antigen test during the physical, Father Catanise replied that he hadn’t received such a test in about four years.

“My friend said, ‘You need to have a PSA,’” Father Catanise remarked.

A PSA blood test measures the protein produced by both cancerous and noncancerous cells in the prostate — a small gland situated below a male’s bladder. Father Catanise returned to his primary-care physician for testing, which revealed that his PSA count was high for his age (he will turn 75 on Sept. 22). Two subsequent tests over the next several weeks showed that the count had increased. At that point, a urologist ordered a biopsy to be taken.

The biopsy, which occurred in February 2021, revealed that Father Catanise had an aggressive type of cancer in two areas of his prostate. Given the choice of undergoing radiation treatment or having his prostate removed, Father Catanise went with the latter option after consulting with his doctors. He underwent a prostatectomy on April 27.

Since then, Father Catanise has gradually returned to ministry — and, with his latest PSA test revealing that he’s cancer-free, he’s looking forward to continuing his pastorate well beyond his 75th birthday.

“As long as my health holds up, I plan to keep working,” said Father Catanise, who has been a priest of the Diocese of Rochester for 39 years and has served as pastor of St. Leo Parish since 2005. He noted that he still experiences discomfort, “but I’m a man of faith and believe God’s going to take care of me,” he said.

By the same token, Father Catanise is adamant that men take care of themselves by getting screened. Two weeks after his prostatectomy, the priest made a lengthy Facebook post describing his journey with prostate cancer and urging every man over the age of 45 to have an annual PSA test. Father Catanise acknowledged that early detection guidelines from the American Urological Association do not advocate for PSA testing to be a routine part of every physical, yet he also noted that primary-care physicians will perform PSA tests upon request, as was the case with his own physician.

Father Catanise said his experiences show how early detection can be life-saving — and why he wants the AUA to include regular PSA screenings in its guidance: “If I didn’t check (my own PSA count), what would have happened?” he remarked.

“It makes me feel so good when men come up and say, ‘Hey, I read your thing on Facebook, and I got my PSA test,’” he said.