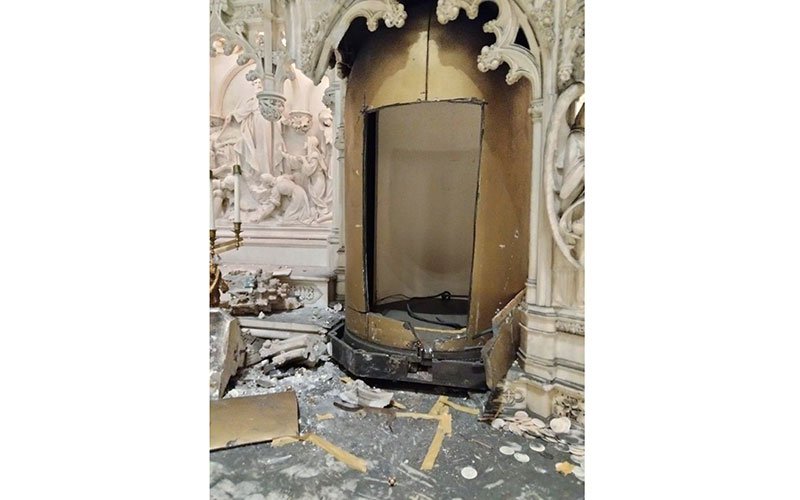 A metal protective casing that held the historic tabernacle at St. Augustine Catholic Church in Brooklyn, N.Y., is seen May 31, 2022. Valued at $2 million, the solid gold and jeweled tabernacle was stolen by burglars who used power tools to cut through the metal casing May 27, 2022, and the crime was discovered by the pastor May 28, according to Brooklyn diocesan officials. (CNS photo courtesy DeSales Media Group)

BROOKLYN, N.Y. (CNS) — A burglar cut through a metal protective casing to steal a historic tabernacle valued at $2 million at a Brooklyn Catholic church.

The burglary is suspected to have taken place May 27 at St. Augustine Catholic Church in the Park Slope section of Brooklyn and the theft was discovered by the pastor May 28, the release said.

A safe in the sacristy also was cut open but nothing was inside, it added.

“This is devastating, as the tabernacle is the central focus of our church outside of worship, holding the body of Christ, the Eucharist, which is delivered to the sick and homebound,” said Father Frank Tumino, the pastor.

The tabernacle dates back to when the church was built in the 1890s. “This holy sacramental receptacle is irreplaceable due to its historical and artistic value,” the diocesan said.

The New York City Police Department was investigating this “brazen crime of disrespect and hate” and has asked the community for any tips that could lead to solving it.

“To know that a burglar entered the most sacred space of our beautiful church and took great pains to cut into a security system is a heinous act of disrespect,” Father Tumino said.

In the neighboring Archdiocese of New York, Cardinal Timothy M. Dolan planned to visit a Manhattan Catholic church May 31 that a news release said was the victim of “a hate crime” a week earlier.

Vandals beheaded and smashed statues in the Our Lady of Fatima Grotto at Our Lady of Sorrows Church.

The cardinal planned to pray an evening rosary, which “will be offered in reparation for this act of vandalism and hate.”