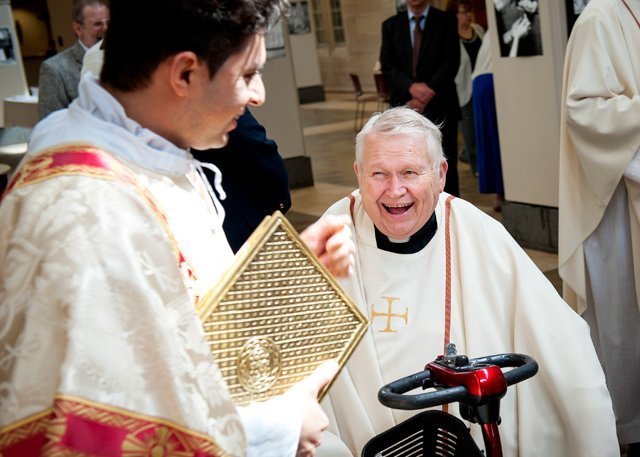 When many people think of Holy Cross Church in Rochester, they can’t help but think of Father Thomas Wheeland, as the two have gone hand-in-hand for more than three decades.

Now, after being at the helm for 35 years, the parish’s longtime pastor is preparing for a new role as a senior priest.

“It is going to be a change, but change is good,” Father Wheeland told parishioners April 23, announcing that his new status will take effect in late June.

In 1982 he became pastor at Holy Cross, his first and only pastorate.

“It was a great day for me,” he told parishioners April 23. “Never in my wildest dreams did I think I would be here (at Holy Cross) 35 years later. (Such a lengthy pastorate is) unheard of today.”

Father Wheeland has been involved in all aspects of parish activity, but he is most passionate about his interactions with parishioners. He told the Catholic Courier April 26 that it is the people of Holy Cross who make the church so special.

“I love the people, the people are great, that is what gave me the spirit to go on for 35 years,” he said.

In addition to his parish, Father Wheeland has demonstrated a strong commitment to Catholic education. In 2008, after Holy Cross School closed due to declining enrollment and rising costs, the parish continued to foster Catholic education through its preschool and by maintaining religious education and CYO programs. The parish also kept the school building completely furnished and did renovation work in hopes that the school eventually might reopen, given any changing demographics within the diocese’s schools. When Our Mother of Sorrows School in Greece and the Cathedral School at Holy Rosary in Rochester closed, Bishop Emeritus Matthew H. Clark authorized Father Wheeland to reopen the school in 2011.

“It (the school) is a great gift to us,” Father Wheeland said, noting that he still celebrates Mass with the students and visits the classrooms.
Though arthritis has forced him to use a walker and an electric scooter to get around, Father Wheeland has remained dedicated to serving the community at Holy Cross. When he turned 70, the customary age at which priests move to senior-priest status, Bishop Clark allowed him to stay on as pastor. When he turned 75, Bishop Salvatore R. Matano also let him stay.

“I felt I was capable and I felt I could do things,” Father Wheeland explained.

Over the past three years, however, he experienced health challenges. After falling in January and having surgery on his spine and neck in February, Father Wheeland said he woke up one day last month unable to walk or get out of bed without a lot of help. It was at that moment that he knew he had to call Bishop Matano and tell him it was time to become a senior priest, he said.

“I did that with a heavy heart, but also with a peaceful heart because I knew that it was time. I knew the Lord had given me a message, I knew that I always said I would know when. I don’t want to leave, but I know that it is time. I know it is the plan of God,” he told parishioners April 23.

Father Wheeland is still working to fully recuperate from the surgery in February. He said his doctors are optimistic that, in time, he may be able to walk without his walker or use of his scooter.

As long as his health permits, Father Wheeland said he will continue serving on the board of Holy Sepulchre Cemetery and as chaplain to the Rochester Police Department. He also plans to find new ministries, especially ones involving the young people of the diocese.

And although he will no longer be pastor after June, he noted that he won’t be a stranger to the people of Holy Cross.

“I will always be there for you,” he told parishioners April 23. “Just give me a call.”