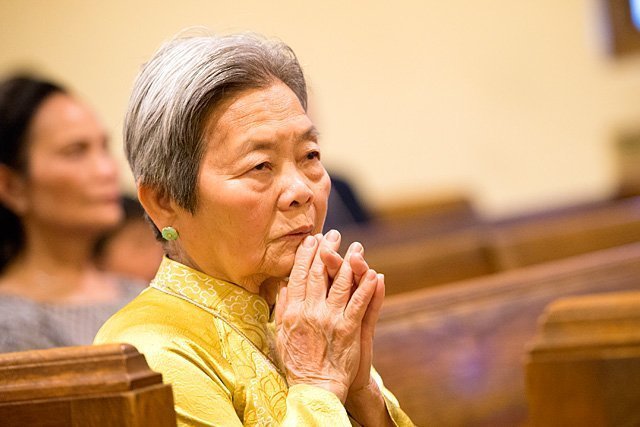 Hong Truong holds her hands in prayer during the Asian Pacific Heritage Mass at Victor’s St. Patrick Cathedral May 7.

These are four key areas of focus identified last year by the Asian Catholic communities of the Diocese of Rochester, which worked together to create a Diocesan Pastoral Plan for Ministry with Asian and Pacific Islanders. Released in January 2016, this plan not only outlines the four areas of focus and suggested action steps related to each one, but also includes background information about the five distinct cultural communities covered by the plan.

"Vietnamese, Korean, Asian Indian, Burmese and Filipino Catholics gathered in small groups over a period of six months to reflect on their present realities and their involvement in the heart of the Church in order to identify priorities and make recommendations in four particular areas," Bishop Salvatore R. Matano explained in a letter included on the first page of the pastoral plan.

Led by Lynette Saenz, director of the diocesan Office for Cultural Diversity, and Father Edison Tayag, pastor of St. Patrick Church in Victor, representatives of the five Asian Catholic communities developed a plan that Saenz said intended to affirm the communities’ gifts, provide a vision for ministry, increase awareness of the communities’ pastoral needs and provide recommendations for addressing those needs.

"We’re still part of one church. To be able to provide that feeling of a larger diocesan church was very good for all of us," she said.

The plan for ministry to Asian and Pacific Islanders is the most recent in a series of pastoral plans that have been created for various cultural communities within the Diocese of Rochester, Saenz said. In the spring of 2015 the diocese released its Deaf Ministry Plan of Action, which was completed through a process similar to the one used with the Asian Catholic communities, she added. The priorities arising from the deaf ministry plan related to vocations, evangelization and access to faith-formation opportunities, reflecting the concerns, beliefs and desires of the deaf community, Saenz said.

The Deaf Ministry Plan of Action called for, among other things, the coordination of a diocesan gathering for the deaf community, so last March the Office of Cultural Diversity and the diocesan Deaf Commission worked together to host the diocese’s first Deaf Catholic Retreat. The full-day retreat drew approximately 70 participants from the Rochester region as well as Syracuse and Buffalo, Saenz said.

Pastoral plans also have been established in recent years for ministry to the local Hispanic and black Catholic communities. The Diocesan Pastoral Plan for Hispanic Ministry was released in November 2012, and ministry to black Catholics in the diocese is guided by the National Black Catholic Congress’ Pastoral Plan of Action Instrument, which was developed after the NBCC’s Congress XI in 2012. Planning already is underway for the next congress, which will take place in Orlando in July 2017.

Black Catholics of the diocese and those who work with the local black Catholic community are invited to attend an Aug. 27 day of reflection in preparation for the national congress. At this event, which will take place in the Bishop Hickey Conference Center at the diocesan Pastoral Center in Gates, participants will be invited to offer input for a diocesan report that will be sent to the NBCC and considered during the development of the next national pastoral plan, Saenz said.

Pastoral plans for ministry to the cultural communities in the diocese are valuable educational documents, Saenz noted, saying that she encourages all area Catholics to read them, even if their parishes don’t include members of the respective cultural communities. These plans are available here.

"We tried to put together something that increases cultural awareness of other communities. It’s not all steps and those kinds of things. The things in there I would say apply to a great number of people. There are some really good ideas," she said.