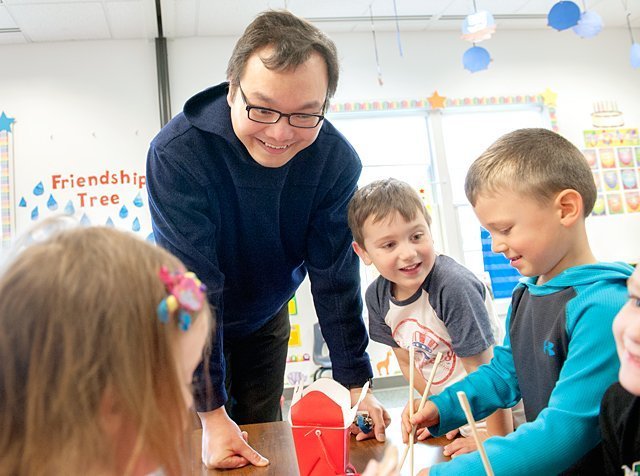 Parishioners often are surprised to find Father Edison Tayag cleaning inside the church or tending to the flower beds and bushes on the grounds of St. Patrick Parish in Victor.

"I get a lot of teasing from parishioners when they see me cleaning the basement or sections of the church," he said with a chuckle.

Father Tayag, pastor of the Victor parish, said he enjoys gardening and likes having things clean and orderly, so he tries to fit those activities into his schedule whenever he can. Doing so can be tricky, however, because there’s a lot more to a pastor’s role than most parishioners probably realize.

"I think the life of a priest is a 24-hour job. Some people may disagree, but that’s how I feel," agreed Father Stephen Karani, pastor of the Southern Tier’s Holy Family Parish, which has worship sites in Wayland, Dansville, Perkinsville and Cohocton.

Holy Family Parish is quite different from St. Patrick Parish in terms of the parishes’ geographic locations and number of worship sites, yet many of Father Karani’s responsibilities are similar to those of Father Tayag.

Many elements of Father Tayag’s weekly routine also are fairly common for diocesan pastors. Father Tayag rises between 5 and 5:30 a.m. five days a week and works at least until the evening most days. Each Sunday he grabs a quick breakfast before heading to the church by 7 in order to pray, review the day’s readings and prepare for the day’s Masses, which take place at 8:30 and 10:30 a.m. The parish also celebrates an additional Mass at 12:30 p.m. during the Easter season to accommodate a large number of first communicants and their families.

After Mass, Father Tayag typically spends 20 minutes greeting people exiting the church and talking with parishioners who express concerns. Then he heads over to the parish center, where the parish offers a coffee hour after each Sunday Mass. The gathering provides a good opportunity for him to mingle with familiar parishioners and to meet new faces.

"That’s a good opportunity just to make connections," he said.

Making connections with parishioners is a priority for Father Tayag, who said he always tries to make sure he’s vested for each Mass in time to greet people at the church entrance as they arrive. Such personal interactions are a key part of his role as pastor, he said.

"It helps parishioners to see that they are personally connected with somebody in church, and I hope that encourages their participation in the parish," Father Tayag said. "One of the difficult things that I hear from parishioners sometimes is, ‘Father, I left the parish and no one even bothered to call because they probably didn’t realize that I’ve stopped going.’ By being out there, even if I don’t know some parishioners by name, I know the faces." 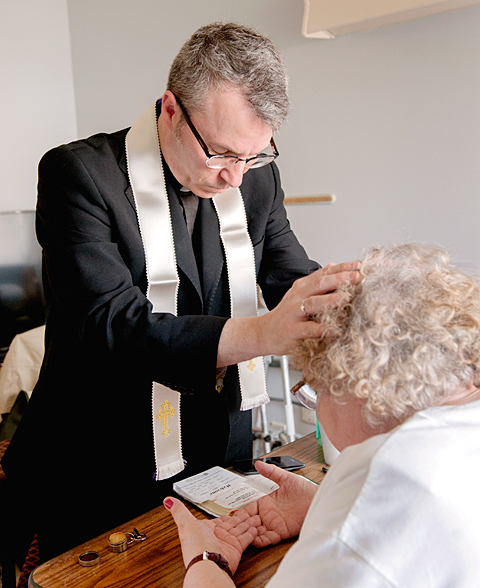 Father Tayag spends his Sunday afternoons preparing for a new program the parish will launch in the fall. When Monday morning rolls around he wakes early again to prepare for St. Patrick’s daily Mass, which begins at 8:30 a.m. each weekday except Thursday. After Mass Father Tayag spends Monday mornings putting together the next weekend’s bulletin. Monday afternoons usually are spent checking in with staff members to see how their ministries are going and what needs or concerns they may have.

"If there are requests for anointings I try to schedule them in the afternoon, and if there is nothing scheduled I try to visit our homebound and our parishioners in nursing homes," he said. "It’s good to connect with them. … It’s good for them to feel like even though they aren’t there, they’re still a part of the church."

Father Tayag said he makes sure to be back at the parish center by 4:30 p.m. in order to greet children and their parents as they arrive for faith-formation classes and to give bulletins to families he did not see over the weekend. Two Mondays a month he participates in meetings for the organizing committees of the Rochester Catholic men’s and women’s conferences.

"And then I go home and if I didn’t get dinner, I eat dinner and just go to bed," Father Tayag said.

Father Tayag’s schedule for Tuesdays, Wednesdays and Fridays is similar to his Monday schedule, with a few additions. On Tuesday and Wednesday mornings he greets children and their parents as they arrive at the parish center for preschool at 9:30 a.m., and in the afternoon he works on any presentations he has to give in the next week. Two Tuesday afternoons a month he meets with diocesan priests’ groups.

On Wednesday mornings Father Tayag meets with parishioners who wish to talk with him about such issues as divorce, annulment or depression. Most Wednesday afternoons are spent preparing his pastor’s reports for meetings of finance and liturgy committees, pastoral council or buildings and grounds committees that each take place one Wednesday evening per month.

On Thursdays Father Tayag generally takes some time to engage in a few leisure activities, such as reading, hiking and enjoying meals with friends. On Friday afternoons he visits homebound parishioners and begins working on his homily for the upcoming weekend’s Masses. He said he tries to have the homily finished by noon on Saturday. Also on Saturdays he participates in the parish’s sacramental-preparation classes, hears confessions and presides at the parish’s 4:30 p.m. Mass.

"I think to some degree the week is pretty much structured based on the needs of the parish, but then there are those (times) … when things that are totally unplanned come up. You learn how to deal with them, so you can feel as though you are still giving your best, even if the day goes unplanned," Father Tayag said.

Funerals, for example, typically are not planned more than a few days in advance. The need for emergency visits to hospitalized parishioners also cannot be anticipated, noted Father Karani, who said even routine hospital visits take a bit of planning in a rural parish like Holy Family. Father Karani routinely visits patients at Nicholas H. Noyes Memorial Hospital in Dansville, but it’s not uncommon for parishioners to be admitted to hospitals in Rochester, which is an hour away from Holy Family.

"To go up and come down requires a bit more planning. (Ministering to) the sick and the homebound is one area where you cannot come up with a script," Father Karani said, noting that several of his parishioners reside in the Livingston County Center for Nursing and Rehabilitation, which is located 25 miles away in Mount Morris.

It also can be difficult to gauge who is missing from the pews from week to week in a parish with multiple worship sites spread out over a large geographic area, he added. Father Karani and Holy Family’s parochial vicar, Father Michael Twardzik, split the parish’s five weekend Masses between them, so neither of them is necessarily in the same church from one week to the next to notice who is absent. As a result, they encourage parishioners to let them know when a fellow parishioner might require visitation or anointing.

Hospital visits can throw a monkey wrench into a pastor’s schedule even when the parish is located near the hospital, added Father William "Mickey" McGrath, copastor of St. Frances Xavier Cabrini Parish, which has three worship sites in Rochester. On the morning of April 25, for example, Father McGrath was called away from the parish office for an emergency visit to Strong Memorial Hospital. He returned to the parish early in the afternoon, only to immediately be called back to the hospital for another emergency visit.

Pastoral visits are core components of most pastors’ schedules, as are Masses, meetings and sacramental celebrations. Nonetheless, each pastor’s responsibilities vary depending on his parish’s unique characteristics, Father McGrath said. St. Frances Xavier Cabrini, for example, is an urban parish with a large Hispanic population, so each year the parish holds approximately 15 quinceañera celebrations, which are a Latin American tradition celebrating a girl’s 15th birthday and transition to young womanhood. The parish also offers weekly Spanish Masses in addition to its schedule of Masses in English. Father McGrath said one of the biggest challenges confronting him and his copastor, Father Robert Werth, is trying to recognize and bring out the gifts in the various cultures represented in their parish.

Individual priests also bring to the role of pastor their own unique gifts, talents and interests, which may relate to outside roles they hold in addition to their pastorates, Father McGrath said, noting that he serves as a Boy Scout chaplain, a spiritual adviser for the local Cursillo movement and a member of the diocesan vocations awareness team.

Yet all pastors share the same goal for their ministries, regardless of their own unique characteristics and the circumstances of the parishes they serve.