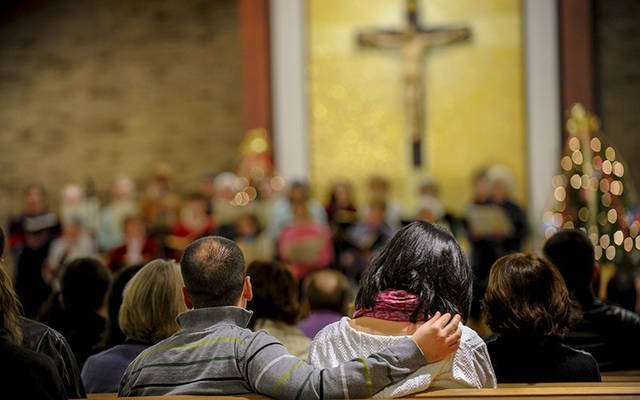 Congregants listen to music at St. Joseph Church in Penfield in 2010 during a night of music to celebrate Twelfth Night, which is the conclusion of the Christmas season. (File photo)

Each year at Christmas liturgies, active members of Catholic parishes unwittingly play the role of innkeeper. Rather than Jesus, Mary and Joseph, their potential guests are the many attendees in their midst who haven’t been to church in several months or perhaps even years.

Should the “regulars” convey indignation toward folks who take up precious pew space and shirk their Sunday obligation the rest of the year? Or, should they view the visitors’ presence as an opportunity to evangelize those who either have consciously left the church or simply drifted out of participating?

Father Ed Palumbos, for one, is decisively in the latter camp, calling evangelization at Christmas “a sacred responsibility.” He said he strives to ensure that people he refers to as “CEOs” (Christmas and Easter Only) are received warmly at the parishes where he is pastor — Fairport’s Church of the Assumption and Church of the Resurrection.

“This is an opportunity for us, not an occasion of judgment,” Father Palumbos stated, adding that during his Christmas homilies, “I explicitly welcome people and make sure they know we’re glad they’re there.”

The alternative from the pulpit, Father John Hayes observed, is to voice criticism. He recalled a Christmas liturgy many years ago during which the presider devoted his entire homily to chastising those who didn’t attend church regularly.

“It wasn’t the loving Jesus that I had come there to celebrate. I don’t think it worked. In fact, I know it didn’t work,” remarked Father Hayes, pastor of St. Martin de Porres Parish in Caledonia, Churchville and Scottsville.

Rather than embarrassing people, Father Hayes favors a gentler message in asking them back to church. “I try to keep it light, like, ‘OK, same time next week.’ I let them know they are always welcome, and I try to make (Christmas Mass) as positive an experience as possible,” he said.

“I can’t make people come, but I invite. I don’t yell at them. People have their reasons (for not attending church), and I understand that. They come in at Christmas with misconceptions and misgivings,” Father Fennessy said. “If you can provide a beautiful setting, beautiful music and a great eucharistic liturgy, that’s a step in the right direction.”

Father Fennessy said he strives to instill a spirit of welcoming throughout the parish; for instance, he reminds his greeters to extend warm Christmas wishes toward all who walk through the church doors. Meanwhile, Father Palumbos said that in the weeks leading up to Christmas, he implores staff members and parishioners to exude “an environment of welcome, hospitality and appreciation” at holiday liturgies.

Father Palumbos noted that such efforts often pay off, saying his parishes typically get a wave of new and returning parishioners based on their positive experiences at Christmas Masses. When he asks why they liked the liturgies, “They say, ‘Because when we walked in the door someone greeted us, and when we got to the pew people let us in,’” he said.

At St. Matthew Parish in Livonia, the role of the laity is deemed so crucial that a “Room at the Inn” team has formed, preparing parishioners for Christmas visitors “with the hope of welcoming them as weekly members of our community,” according to a recent bulletin notice. The article went on to state that it’s vital for all to provide hospitality “if we want to make a positive impression ‚Ä¶ and have any hope of them returning.”

Then again, Father Hayes said, one must be willing to appear at church in the first place in order to gain an impression. Along those lines, he wrote an article a few years back that has run in local newspapers in the communities where he has served, encouraging people to find a church at Christmas if they aren’t already attending one. Father Hayes’ article likens the possibility of a Christmas spiritual conversion for such folks to the one experienced by Ebenezer Scrooge.