Paul and Silas tell their jailer about Jesus - Catholic Courier 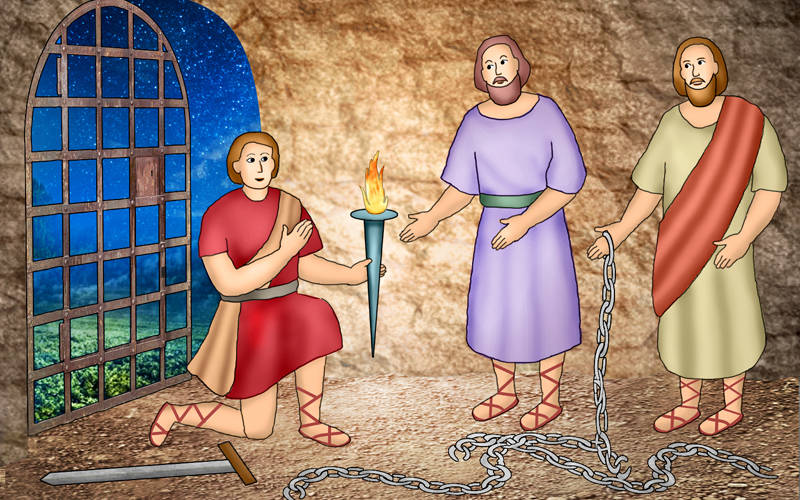 This is the artwork for Kids' Chronicle for May 11, 2021. (Illustration by Linda Rivers)

Paul and Silas tell their jailer about Jesus

Paul and Silas tell their jailer about Jesus

Paul and Silas traveled from city to city telling people about God and Jesus.

One day, they traveled to the Roman colony of Philippi in Macedonia, in what is now the north of Greece. There they encountered a slave girl who was possessed with an oracular spirit. The spirit made it so she could tell fortunes, and her fortune-telling made a lot of money for her masters.

She followed Paul and Silas for several days, shouting, “These people are slaves of the Most High God, who proclaim to you a way of salvation.”

Paul finally became annoyed and cast out the spirit in Jesus’ name.

When the girl’s masters saw that their money-making opportunity was gone, they seized Paul and Silas and dragged them to the public square before the local authorities.

“These people are Jews and are disturbing our city and are advocating customs that are not lawful for us Romans to adopt or practice,” they said.

The authorities had Paul and Silas stripped, beaten with rods and thrown into prison. The jailer was ordered to guard them securely, so he put them in the innermost cell and secured their feet to a stake.

About midnight, Paul and Silas were praying and singing hymns to God as the other prisoners listened.

Suddenly, there was an earthquake so severe that the jail’s foundation shook. All the doors flew open, and all the prisoners’ chains were pulled loose.

The jailer awoke and saw the open doors. He became distraught and was going to kill himself, thinking that all the prisoners had escaped.

“Do no harm to yourself; we are all here,” Paul shouted.

The jailer rushed to where Paul and Silas were and fell down before them, trembling in fear.

“Believe in the Lord Jesus and you and your household will be saved,” they said.

1. Where did Paul and Silas travel?

2. Why were Paul and Silas put in jail?

In Acts 12, we can read about another time that an apostle was put in prison.

Beginning in verse 1, we read that King Herod was persecuting the apostles. He had James killed, and he had Peter arrested and put in prison.

Herod put Peter under the guard of four squads of four soldiers each and intended to bring Peter before the people after Passover.

On the very night before Herod was to bring him to trial, Peter was secured by double chains. He was sleeping between two soldiers, and outside the door, guards kept watch on the prison.

Suddenly, the angel of the Lord stood by Peter, and a light shone in the cell. The angel tapped Peter on the side and awakened him.

“Get up quickly,” he said as the chains fell from Peter’s wrists.

The angel told Peter to put on his belt and sandals and follow him. Peter complied, not realizing that what was happening was real. He thought he was seeing a vision.

Peter followed the angel past the first and second guards. They came to an iron gate, which opened for them by itself.

They exited the gate and made their way down an alley. As suddenly as he came, the angel disappeared.

“Now I know for certain that (the) Lord sent his angel and rescued me from the hand of Herod and from all that the Jewish people had been expecting,” Peter said.

St. Isidore was born near Madrid, Spain, in 1070. He married and worked the same fields all his life.

Isidore was very devout, visiting church on his way to work, praying while plowing and making local pilgrimages.

According to legend, he was associated with the miraculous feedings of birds and a crowd of poor men.

Using the hints provided from the Acts of the Apostles, draw a line between the quotation and person who said it.