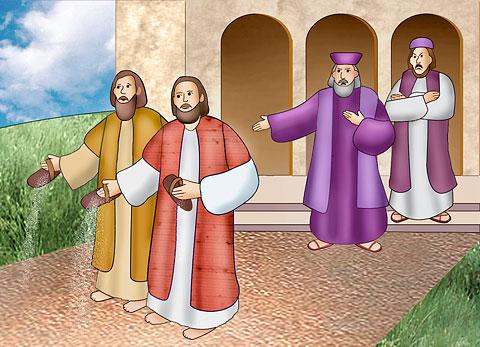 When a group of Christians in one of the churches in Antioch were praying, the Lord spoke to them and said, “Set apart for me Barnabas and Saul for the work to which I have called them.” The Christians laid hands on Paul and Barnabas, praying for them as they began their missionary work for the Lord.

Their first stop was at Cyprus, and they also visited Pisidia and Perga. Paul gave a sermon at the synagogue reminding the people of all that God had done for Israel since the time they were enslaved in Egypt. Paul made such an impression on the people with his eloquence and the authority with which he preached that he was invited to speak on the following Sabbath.

Almost everyone in the city came to hear Paul preach the word of God. Some of the Jews who saw the crowds that had come to hear Paul were very jealous of his popularity, so they contradicted what Paul was saying. In answer to this criticism, Paul spoke to the people.

“It was necessary that the word of God be spoken to you first, but since you reject it and condemn yourselves as unworthy of eternal life, we now turn to the Gentiles. For so the Lord has commanded us, ‘I have made you a light to the Gentiles, that you may be an instrument of salvation to the ends of the earth.’”

While some of the Jews were angered by Paul’s words, the Gentiles rejoiced that such a wonderful gift had been offered to them. They glorified the Lord in thanksgiving. The word of the Lord spread throughout the region and many people came to believe in Jesus.

The Jews who were jealous and angry used their political connections to gain the support of the influential men and women of the community to try to persecute Paul and Barnabas. The two men were told to leave. But Paul and Barnabas knew they were obeying what God had told them to do. They shook the dust off their feet as a protest against their critics and proceeded on to Iconium, rejoicing because they were filled with the Holy Spirit.

READ MORE ABOUT IT:
Acts 13

Q&A
1. What happened when the Christians were praying in Antioch?
2. What did Paul say he and Barnabas would be to the Gentiles?

Bible Accent: Luke writes the Act of the Apostles

Luke, a Syrian who had converted to Christianity, wrote the Acts of the Apostles approximately 50 years after Jesus had ascended into heaven. He addressed the book to Theophilus, a man whose name means “one who loves God,” but most scholars believe the book was intended for everyone who loves God. Luke described the events that became the foundation of the church, and he recounted the words and deeds of the important early Christians. A significant portion of Acts is devoted to the conversion and missionary work of Paul. An important message of the book is that salvation had become available to everyone, not just the Jews. If that had not been the case, Luke would not have been able to become a Christian, and neither would the Gentiles.

Catherine of Siena (1347-1380) was born in Italy on the feast day of the Annunciation. Her twin sister lived only a short time, making Catherine the youngest of 25 children. She was a cheerful young girl who demonstrated a strong devotion to Mary, even when she was as young as 6 years old. Her parents wanted her to dress well and keep herself well-groomed because they wanted her to attract a good husband. But Catherine wanted instead to remain unmarried, hoping to pursue a religious life, and she later joined the Dominican order. She had a vision of Jesus and earned a reputation of holiness, and many miraculous deeds are attributed to her ministry. Her life was not without political controversy, but she never lost sight of her love of God. We remember her on April 29.