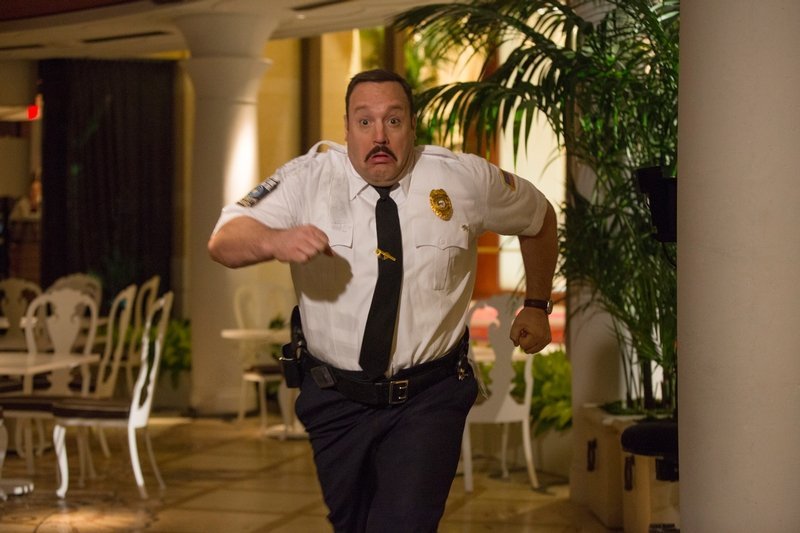 Kevin James stars in a scene from the movie "Paul Blart: Mall Cop 2." Catholic News Service classification is A-I -- general patronage. Motion Picture Association of America rating is PG -- parental guidance suggested. Some material may not be suitable for children.
By Kurt Jensen
Catholic News Service
NEW YORK (CNS) — The stout bromides of "Paul Blart: Mall Cop 2" (Sony) only serve to make its thin plot and deliberate artlessness more glaring.
Kevin James, who co-wrote the screenplay with Nick Bakay, returns as the earnest, perpetually suspicious, hypoglycemic security guard first seen in the 2009 original. As before, Blart is a presented as a comically awkward figure — one who’s far more graceful on a Segway than on his own feet.
As the sequel opens, Blart is newly divorced from his second wife and quite sad. He receives a sudden jolt of happiness, however, when he’s invited to a security officers’ conference in Las Vegas. He sets off at once for the fabled oasis, his teenage daughter, Maya (Raini Rodriguez), in tow.
Once there, both of them get mixed up in a criminal scheme: Gang leader Vincent (Neal McDonough) is plotting to steal valuable artworks from Sin City’s casinos.
Under the direction of Andy Fickman, the humor in the ensuing scenes is supposed to derive from sight gags and from Blart’s frequent intonation of such inspirational mantras as "Integrity is a bewitching gumbo."
But none of this comes off; the movie is leaden and bereft of laughs. Blart’s fellow watchmen appear only as cruel caricatures of the socially inept.
Blart’s supposedly stirring words as he delivers the convention’s keynote speech are as unobjectionable as most of the content surrounding them. Yet they land on the ear as mawkish cliches.
"If you believe the purpose of life is to help yourself, then your life has no purpose," he intones. "Help someone today!"
The film contains frequent slapstick violence and mishaps. The Catholic News Service classification is A-I — general patronage. The Motion Picture Association of America rating is PG — parental guidance suggested.
– – –
Jensen is a guest reviewer for Catholic News Service.
Copyright © 2022 Catholic News Service, Inc. All rights reserved. Linking is encouraged, but republishing or redistributing, including by framing or similar means, without the publisher's prior written permission is prohibited.