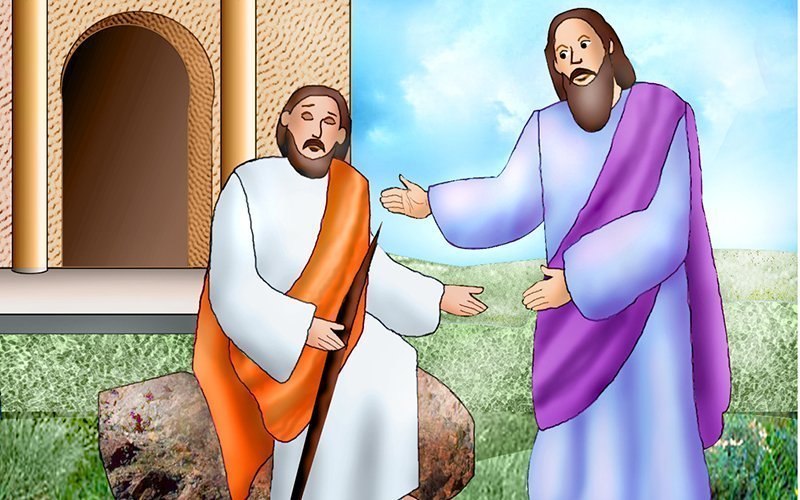 Paul is converted to Christianity

Paul is converted to Christianity

When Paul reached Jerusalem, the first thing he wanted to do was meet the disciples there. But the disciples did not want to meet Paul. They were afraid of him. They knew he was a stern persecutor of the followers of Jesus. So Barnabas, a Christian everyone knew, stepped up to help Paul.

Barnabas explained that Paul had persecuted Christians, but that now he was different. The Lord had spoken to Paul out of a bright light and blinded him. A Christian named Ananias, who lived in Damascus, prayed for Paul, and his sight was restored.

Ananias had had his own fears of Paul until the Lord spoke to him in a vision. “Get up and go to the street called Straight and ask at the house of Judas for a man from Tarsus named Saul.”

“Lord,” Ananias answered, “I have heard from many sources about this man, what evil he has done to your holy ones in Jerusalem. And here he has authority from the chief priests to imprison all who call upon your name.” The Lord reassured Ananias. “Go, for this man is a chosen instrument of mine to carry my name before Gentiles, kings and Israelites.”

When Ananias found Paul, he laid his hands on him and said, “Saul, my brother, the Lord has sent me, Jesus who appeared to you on the way by which you came, that you may regain your sight and be filled with the Holy Spirit.” Paul was healed, then baptized, and he immediately began preaching about the power of God and the love of Jesus.

The disciples in Damascus were surprised by Paul’s actions. They wondered: Isn’t this the man who persecuted the followers of Jesus in Jerusalem and came here to take them back to the chief priests in chains? After they heard about Paul’s conversion, the community of Christians in Jerusalem welcomed him. But some people in Jerusalem were not willing to accept the new Paul. He would get into religious debates with Greek-speaking Jews called Hellenists, and they did not like what Paul was saying. The disciples learned the Hellenists were plotting to kill Paul, so they sent him to Tarsus to get him away to safety.

And the church continued to grow throughout Judea, Galilee and Samaria.

READ MORE ABOUT IT:
Acts 9

Q&A
1. Why was everyone afraid of Paul?
2. Why did Paul have to leave Jerusalem?

Saul was a Pharisee who believed that early Christians worshiped a man, rather than God. He wanted them put into prison so they would stop spreading their message about Jesus. But God loved Saul, who was later known as Paul, and he had “important work” planned for his life.

Saul was temporarily blinded by a bright light sent by God, but he was healed and became one of the most influential Christians of his time. He wrote letters to people and churches that we still read in the New Testament.

As a missionary, he traveled around the world preaching, doing  miracles and converting many to Christianity. We may never be as famous as Paul, but God has important work planned for each of us, too.

Let us always pray that we know what God’s plan is and try to live it.

Brendan (d. 577 or 583) was born in Ireland. He was cared for by St. Ita and taught by Erc, a bishop who saw his student ordained as a priest. As he continued his religious studies, Brendan sought the counsel of St. Jarlath of Tuam. As a monk, he quickly attracted a group of followers and founded a religious community. Some sources suggest that Brendan’s followers numbered as many a 3,000, and that he was visited by an angel who gave him a code of conduct to live by. He was as modest after his death as he was in life. He did not want any special attention paid to his body, so he left instructions that he was to be buried in a secret place. We remember him on May 16.