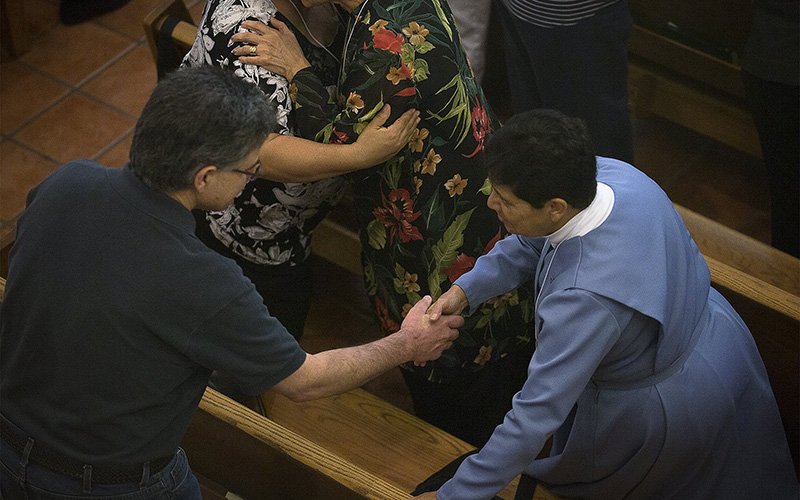 People exchange the sign of peace during Mass at St. Pius X Church in El Paso, Texas, Sept. 23, 2019. Peace has to start at home -- not simply in the physical dwelling where we reside with our families (though that certainly matters), but in the very core of our own being, especially our connection to God. (CNS photo by Tyler Orsburn)

The church’s teaching on war and peace

For my junior high school graduation ceremony, our class of 700-plus was assigned to write on the topic, “Man: Architect of His Future.” The best of our work would then be culled into a cohesive set of speeches.

This was June 1968, just days after Robert Kennedy had been assassinated, only two months after the assassination of the Rev. Martin Luther King Jr. The Vietnam War was escalating, in casualties and in unpopularity. Soviet tanks were about to head into Czechoslovakia to quell a pro-democracy uprising. At home, we were two months shy of the Chicago riots.

And we were supposed to write about how we were the architects of our future?

To this day I have no recollection of what I wrote, nor of what was included in the speeches presented at the ceremony. Years later, though, I reflected on what I might say now, with a few more years’ perspective, on how we are “architects of our future,” especially with regard to promoting peace in our world, peace that seems as far away now as then.

The simple answer is that peace has to start at home — not simply in the physical dwelling where we reside with our families (though that certainly matters), but in the very core of our own being, especially our connection to God.

“Peace is founded on the primary relationship that exists between every human being and God himself, a relationship marked by righteousness,” declares the Compendium of the Social Doctrine of the Church. “Where there is violence, God cannot be present” (No. 488).

Understanding this teaching should then lead us to acknowledge our connection with one another. “Peace,” the compendium says, “can flourish only when all recognize that everyone is responsible for promoting it” (No. 495).

That is a daunting challenge. The desire to build walls around our own theologies and opinions, and not bridges of understanding and empathy, is antithetical to every element of Catholic teaching on the subject of peace and peace building.

The coronavirus pandemic should have taught us how dependent we are on one another for our basic safety and well-being, and how sacrifice is essential in building a better and stronger society.

“In the face of the pandemic,” said Pope Francis in his 2021 World Day of Peace Message, “we have realized that we are in the same boat, all of us fragile and disoriented, but at the same time important and needed, all of us called to row together, since no one reaches salvation by themselves, and no state can ensure the common good of its population if it remains isolated.”

The culture of care, said Pope Francis, “calls for a common, supportive and inclusive commitment to protecting and promoting the dignity and good of all, a willingness to show care and compassion, to work for reconciliation and healing, and to advance mutual respect and acceptance. As such, it represents a privileged path to peace.”

The pope’s words reflect the teaching of “Gaudium et Spes,” the Pastoral Constitution on the Church in the Modern World. “That earthly peace which arises from love of neighbor symbolizes and results from the peace of Christ which radiates from God the Father,” the constitution states. “For by the cross the incarnate Son, the Prince of Peace reconciled all men with God.”

Sacrifice. Reconciliation. Love. These are paths to peace.

Yes, it may be far beyond our reach to impact the lives of people on the other side of the world. But we can certainly treat one another — family members, neighbors, classmates, fellow workers and parishioners — with basic kindness, decency and respect. We may come into conflict at times over various issues, but we can resolve them with dialogue and without rancor.

“Blessed,” says Jesus, “are the peacemakers, for they will be called children of God” (Mt 5:9).

And in some small way, I would respectfully add, architects of their future.