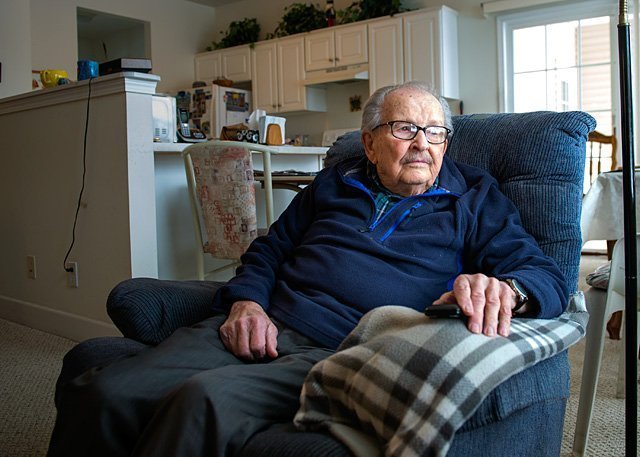 Stanley Hwalek is a World War II veteran who was present at the attack on Pearl Harbor on Dec. 7, 1941.

GREECE — Fresh from celebrating his 97th birthday on Jan 23, Stanley Hwalek retains the vitality of a person many years younger.

His gait is steady and his handshake firm. He recalls key moments from his past with sharp accuracy and detail. He attends Mass every Sunday at his parish, St. John the Evangelist, and several times per week drives two miles from his townhome to the Mall at Greece Ridge for “mall-walking” exercise.

What makes Hwalek’s longevity even more remarkable is that on Dec. 7, 1941, he wasn’t certain of making it to his 22nd birthday, much less his 97th.

Seventy-five years ago Hwalek was a United States Navy coxswain, maintaining the decks of the battleship USS Nevada stationed at Pearl Harbor, Hawaii. The morning had been peaceful, he said, with reveille at 6 a.m. instead of the usual 5:30 due to it being a Sunday.

“After breakfast I went out on deck to read the newspaper,” Hwalek recalled. Just before 8 a.m., he noticed considerable smoke coming from the airfields on nearby Ford Island. He initially thought it was due to a routine maneuver, but soon realized an attack was underway.

“These god-darn planes start coming over, and they’re (heading) straight for the ship,” he said.

Japanese forces stormed Pearl Harbor for about two hours, inflicting monumental damage from the surprise attack. Nearly 2,500 people were killed, more than 90 percent of them U.S. troops. One day later, following President Franklin D. Roosevelt’s declaration of Dec. 7 as “a date which will live in infamy,” the U.S. formally entered into World War II.

When the siege on the Nevada and other battleships in Pearl Harbor began, Hwalek responded to general quarters — a signal for all hands to immediately attend their battle stations — by relocating to a small enclosure.

“All of a sudden I heard the ship heaving. That’s when it got hit by a torpedo … the lights went out, my phone went out, everything was pitch black,” he said.

For more than an hour, alone in the darkness, Hwalek listened to bombs assaulting his ship: “I wasn’t sure I’d make it at all. I was scared in that turret; I was praying and everything,” he recalled. When he re-emerged after quiet finally resumed, “Things were burning all over the ship so I went out to help put out fires.”

The Nevada managed to get underway and beach itself, but not before approximately 60 crew members were killed with more than 100 wounded. Hwalek escaped uninjured, yet in the ensuing days was unsure if another Japanese attack was imminent.

“Everybody was as nervous as could be,” he said.

Hwalek served on the Nevada from 1939-42 after having enlisted in the Navy in 1938. He subsequently saw duty in the Atlantic Ocean, where he again encountered dangerous conditions as U.S. troops sought to locate and destroy German submarines.

He was still performing active duty when World War II ended in 1945 in the Allies’ favor. Upon being discharged in September of that year — after seven years of service and with a rank of boatswain’s mate second class — he returned to his native Rochester, where he had grown up in St. Stanislaus Kostka Parish and graduated from Franklin High School.

In 1948 Hwalek married his wife, Gertrude; the couple were married for 62 years before her death nearly six years ago. They have two children, two grandchildren and three great-grandchildren. Hwalek spent 36 years working for DuPont, working his way up to scheduling supervisor before retiring in 1982. He has resided in Greece since 1978.

A recipient of several military medals, he’s among a very small group of remaining survivors to be directly involved in that day of infamy 75 years back. This past Dec. 7, during an annual Pearl Harbor remembrance at the Port of Rochester, Hwalek was given the honor of addressing participants and throwing a ceremonial wreath into the Genesee River. He stresses the need for ongoing public attention honoring the sacrifices of U.S. soldiers — particularly from wars that he feels are fading from public memory, such as World Wars I and II.

Hwalek wears a pacemaker and reports he’s generally in good health, noting that good genes run in his family. Yet he doesn’t ever forget that things could have turned out much differently many years ago, based on the harm he risked while serving his country.

“Well, I’ve been very fortunate, yeah, all these years I’ve been fortunate,” he remarked. “I’m lucky (after) what I went through and what I saw.”