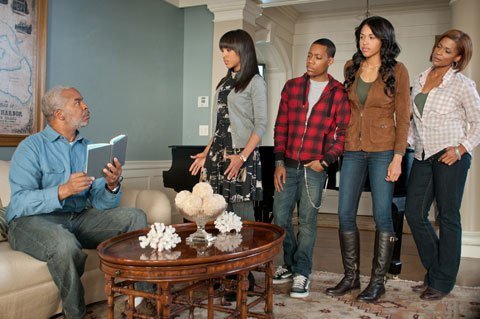 NEW YORK (CNS) — People are funny. So at least an old saw — and the title of a once-popular radio and television series — inform us. "Peeples" (Lionsgate), on the other hand, not so much.

Backed by producer Tyler Perry, writer-director Tina Gordon Chism serves up a derivative comedy about the mismatch between an earnest young suitor and those he would like to make his in-laws. But the lack of originality on display pales beside the ill-considered humor and freewheeling sexual antics Chism’s picture showcases.

In this case, the beau in question is easygoing Manhattan-based children’s entertainer Wade Walker (Craig Robinson). Wade makes a big mistake when he decide to crash live-in girlfriend Grace Peeples’ (Kerry Washington) weekend at home with her affluent, eccentric family. Wade hopes to transform the brief country idyll — to which he was deliberately not invited — into the perfect occasion for a proposal.

Arriving in tony Sag Harbor, where Grace’s folks have their summer place, Wade is understandably discouraged to discover that Grace has never so much as mentioned his existence to her relatives. They prove welcoming enough, nonetheless, with the notable exception of Grace’s uptight jurist father, Virgil (David Alan Grier).

Since the Peeples clan is wealthy — Wade’s nickname for them is "the chocolate Kennedys" — dysfunction and denial are, of course, rife. Daphne is a recovering alcoholic who now looks to her garden for substitute stimulants; Grace’s little brother, Simon (Tyler James Williams), is an aspiring gangsta with sticky fingers; soul-of-propriety Virgil secretly frequents a beach where birthday suits are the swimwear of choice. Being of good working-class stock, Wade himself is naturally above such duplicity.

Chism shows the occasional flash of wit as her formulaic farce plays out. But a subplot involving Grace’s sister, Gloria (Kali Hawk), a television news anchor, sends the message that her lesbian relationship with her producer Meg (Kimrie Lewis-Davis) — which, up until now, has constituted yet another family secret — should be accepted without question.

The fact, moreover, that the two women’s bedroom activities draw the salacious interest, close observation and would-be participation of Wade’s brother, Chris (Malcolm Barrett) — who has found his way to Sag Harbor to give Wade his unwanted brand of moral support — is played for laughs.

The film contains a frivolous treatment of homosexual acts, voyeurism, and aberrant heterosexual behavior, cohabitation, brief obscured nudity, inadvertent drug use, considerable sexual humor, about a dozen crude terms and some crass language. The Catholic News Service classification is O — morally offensive. The Motion Picture Association of America rating is PG-13 — parents strongly cautioned. Some material may be inappropriate for children under 13.