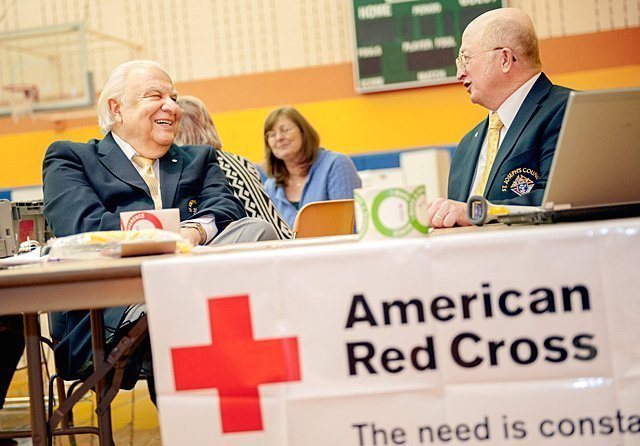 They may be the new kids on the block, but that doesn’t mean they are lacking in enthusiasm.

The Penfield Knights of Columbus Council No. 15471, which has been in existence for three years, and which was officially chartered in March 2012, recently was honored by the New York State Knights Council and the international Supreme Council for its membership gains and service projects.

Those service projects have included regular blood drives, which have collected enough blood products over the course of the past three years to help more than 600 people, said Arthur Thorsen, financial secretary for the council.

The council also recently started participating in the homeless outreach spearheaded by St. Mary Parish, Rochester, and St. Joseph Parish, Penfield. Members of the council purchased and made sandwich meals that were given to the homeless as part of a street outreach Oct. 28. The council also gives out new coats to children being served through various outreaches through its Coats for Kids program. Members also volunteer at St. Ann’s Home and at the Canandaigua VA.

"We try to support desperate needs, and they are genuine," said Bruce McDermott, a member and lecturer with the council.

That service has helped the council draw in new members who want to get involved in helping others, said Vito Vitelli, the council’s grand knight. He noted that the council recently tripled its membership quota, earning it the Circle of Honor Platinum Award, the highest award in the state Knights of Columbus, and the Supreme Council’s Triple Star Award, the highest award in the international Knights of Columbus, which recognizes the top 1 percent rated councils globally.

McDermott noted that a Ladies’ Auxiliary also has started up at the parish, enabling both him and his wife to participate in the Knights organization.

"I get more out of it than I put into it," McDermott remarked.

The council plans to keep on growing both through new members and programs, Thorsen said.

"We’re still pretty new," he said. "It takes a while to develop programs."