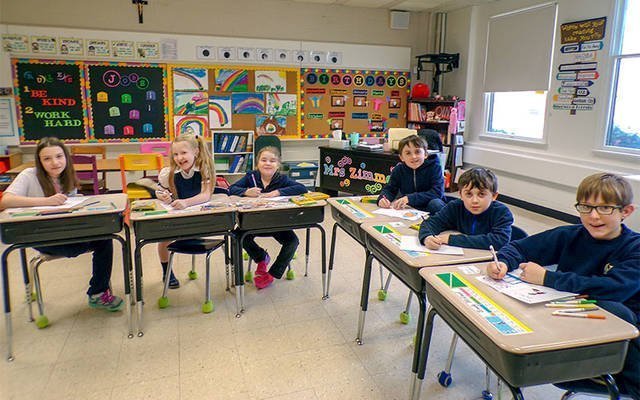 Students at St. Michael School in Penn Yan write letters to the elderly, homebound and nursing-home residents in their community.

Jeanne Schenk received a handwritten card in the mail just a few weeks after her husband passed away in October 2011. She’d received a number of sympathy cards in the mail in recent weeks, but this card was different. It wasn’t a sympathy card, but a Thanksgiving card from a student at St. Michael School in Penn Yan.

“It was just so sweet,” Schenk recalled. “It was a nice extra reminder that somebody cared, and I have gotten cards ever since then.”

St. Michael students do care about the people in their community, and they have been expressing that care in the form of handwritten letters and cards for more than a decade, according to Anna Hurley, first-grade teacher at St. Michael. This ministry began in 2005 and was born out of then-principal James Tette’s desire to forge connections between St. Michael’s students and the people of Our Lady of the Lakes Parish.

The school maintains a list of parishioners and others in the community who are ill, homebound or reside in nursing homes, as well as individuals who are going through tough times or are strong supporters of the school. Community members sometimes call the school to request that specific names be added to this list, noted Principal Tom Flood. St. Michael students in kindergarten through fifth grade send cards and letters to the people on this list at holidays and other times throughout the year, Hurley said.

Hurley’s first-graders work together as a class to brainstorm ideas about what to write about and how to decorate their cards and letters. They then write the letters on their own, which is a good experience for children, especially in this digital age, said Hurley, noting that the exercise gives students a chance to practice their composition, grammar and handwriting skills.

The Curbeaus said they’ve “thoroughly enjoyed” their correspondence with Leah.

“Her comments and artwork are a joy and make us smile. It’s a wonderful connection,” Bonnie Curbeau remarked.

Flood said he often receives such positive feedback, and Hurley said recipients sometimes write back to the children or send them small gifts, such as holy cards or religious medals.

Third-grader Kherington McLoud said receiving such mail is exciting and helps her understand the effect her own letters have on other people.

“A lot of people are lonely and they feel like they’re being forgotten about ‚Ä¶ so I think it’s important that we tell them that they are being noticed,” Kherington said.

“It’s fun to do because it brightens people’s day and it also makes us happy to know that we’re helping in the community,” Leah added.

The time and effort the students put into their cards and letters is obvious, and the task helps the students learn to think about others, noted Schenk, who is a retired elementary-school teacher. Receiving mail from the students makes her feel special and connected to the school community, she added.

“I feel like I know some of these kids even though I don’t know who they are,” Schenk said.