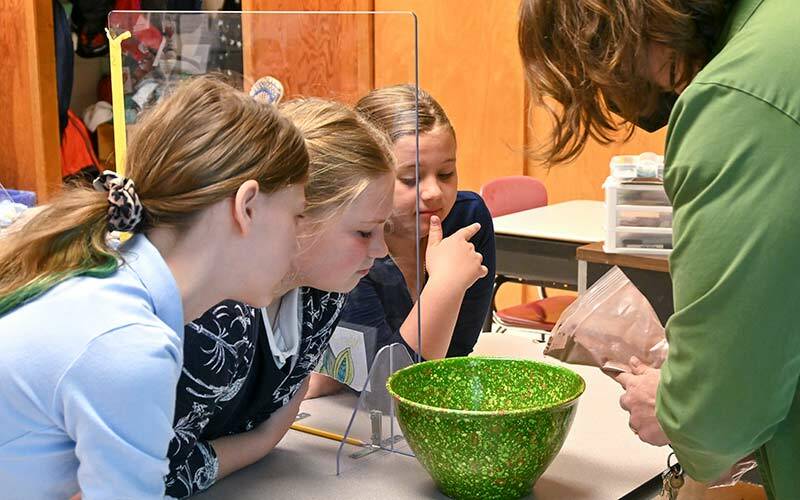 April 19 was a busy day at St. Michael School in Penn Yan.

Third- and fourth-graders planted vegetable gardens on the school grounds, while students in other grades took part in hands-on, artistic activities as they learned about different types of trees, pollinators and invasive species.

That full slate of activities represented just one of day of St. Michael’s weeklong celebration commemorating Earth Day, which was April 22.

One day simply could not contain the plethora of activities, projects and workshops St. Michael’s faculty, staff and parent volunteers wanted to provide for students, she said. Located in a rural community in the heart of the Finger Lakes region, the St. Michael School community takes environmental issues and concerns very seriously, she added.

Environmental issues are a core concern for school family

The school community’s deep roots in environmental issues were on display during Earth Week. The April 19 activities, for example, were led by Lindsey Dean and Sam Castner, cofounders of IDEA Collective, a Dundee-based company that connects kids with nature through art, educational play and hands-on activities. Castner is the father of two current St. Michael students as well as two graduates.

Another parent of two St. Michael students, Caroline Boutard-Hunt, is an agricultural educator with Cornell Cooperative Extension of Yates County and visited the school April 21 to teach students about the importance of native plants and help them make seed balls, which they took home to plant in their neighborhoods. Early in the week, students raised money for the Finger Lakes Museum, whose mission is to “celebrate and showcase the cultural and natural history of the entire Finger Lakes region,” according to Natalie Payne, the museum’s executive director.

Payne, whose two children attend St. Michael, visited the school later in the month to accept the money the students raised and tell them more about the museum’s efforts to get people outdoors and help them appreciate the natural resources of the Finger Lakes region. Many people don’t realize how special the region is, she told the Catholic Courier.

“When you look at water across the globe, there is only between 2 to 3 percent of that is fresh water. So much of that 2 to 3 percent is actually held up in glaciers, ice caps and groundwater, leaving very little at surface level that you can see, enjoy and utilize,” Payne said. “Water is life. The fact that we have 11 freshwater resources in our region is so special.”

Children can improve the world around them

Getting people — especially children — to understand why the region is so special is the first step toward hopefully encouraging them to become better stewards of the region’s natural resources, Payne added.

“I think it’s really important for kids to take ownership of improving their communities and the environment,” agreed Boutard-Hunt. “Kids are incredibly thoughtful and capable of making big differences to improve our world and inspire others to do the same.”

Last year, Boutard-Hunt came to St. Michael to teach students about composting, and that presentation led to the development of an ongoing composting program at the school. This year, Boutard-Hunt helped the students make native-wildflower seed balls that will beautify their neighborhoods while also providing food sources for pollinators, she said.

The process of planting vegetable gardens on St. Michael’s campus helped students learn where the food they eat comes from.

“When we buy our fruits and veggies from the store, it actually comes from farmers who grow them from tiny little seeds,” Dean said. “They were ecstatic to get their hands in the dirt and go outside.”