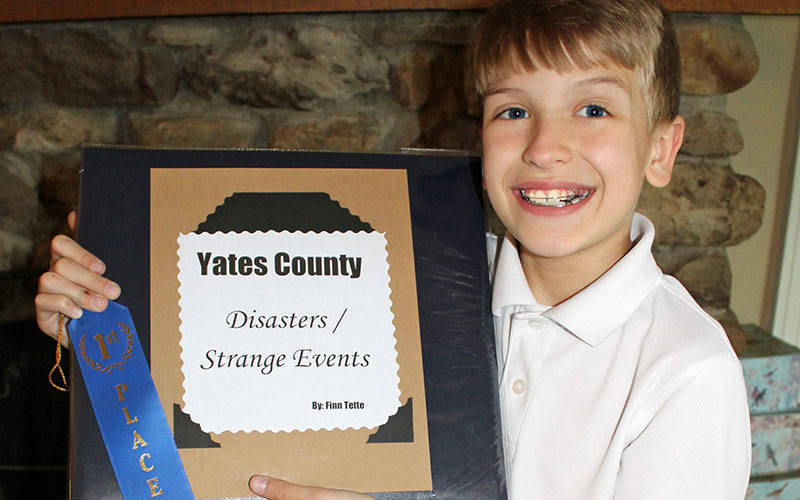 Devastating fires, floods and storms in Yates County. A boy who caught a fish with his nose in Keuka Lake. A kangaroo on the lam in Penn Yan.

Fourth-grader Finn Tette became an expert on all of these things recently as part of his preparation for St. Michael School’s annual Local History Fair. The fair is a long-standing tradition at the Penn Yan school, according to Kristin Burch, fourth-grade social-studies teacher at St. Michael School.

The tradition began about 35 years ago, when Suzanne McNeil asked her fourth-grade students to complete research papers and presentations on topics related to the history of Yates County or Penn Yan. Burch, who graduated from St. Michael School in 1998, still remembers the project she completed on Keuka College when she was in fourth grade. When she began teaching at St. Michael School 10 years ago, she took over the coordination of the school’s Local History Fair.

“I wanted to make sure that we continued the tradition,” Burch explained.

Each February, Burch gives her fourth-grade social studies class a list of approximately 50 potential topics and asks each student to choose one he or she finds interesting. These suggested topics range from the history of agriculture in Yates County to the history of local camps, schools and businesses.

“They can research their families, if they’re local,” Burch added.

Once students’ topics are approved, students have several weeks to research these topics, with help from their parents, Burch and the staff of the L. Caroline Underwood Museum in Penn Yan. The museum’s staff members have been incredibly supportive of the project, and even sent a wealth of information about the selected topics to the students when the pandemic forced Burch’s class to forego their annual research trip to the museum.

After completing several weeks of research, the students write papers — complete with bibliographies — on their topics and create “hands-on projects” to accompany the papers. These projects could be anything from scale models or dioramas to scrapbooks or rubbings of gravestones, Burch said.

Once these projects are complete, the fourth-graders must present the projects to their classmates as well as St. Michael’s third- and fifth-graders. Burch also invites three members of the Penn Yan community to judge the projects.

This year, Finn Tette’s project on disasters and strange events that have occurred in Yates County took first place.

“The idea of learning about strange events really interested him,” said his mother, Carrie Tette.

Giving the kids the freedom to choose topics they’re interested in motivates them to work hard on the projects, Burch and Tette agreed.

“The kids aren’t always thrilled at getting more homework, but once they know they are allowed to get creative with their projects, they dive in quick,” Tette remarked.

Many students, especially those who’ve had older siblings in the school, are familiar with the Local History Fair and have topics in mind even before Burch introduces the project in February.

“I learn more and more about our history every single year because the students pick different topics,” Burch said.

Participating in this project helps students learn how to research as well as how to organize and write a research paper, she added. Interviewing people during the research process and presenting the projects in front of peers and adults helps students gain valuable experience that will help them become better communicators, Burch said.

Once the students start learning interesting facts about their communities, they’re eager to share this information with others, Tette said.

“Every school in America should have this project. Children need to know our history. Knowing where they came from and what shaped their town is a blessing,” Tette said.

Finn, for example, learned that each time a natural disaster struck in Yates County, the county’s residents stepped up to help each other, Tette said.

“Strangers helped strangers. He thought that was so wonderful,” Tette said. “(We) talk about being Jesus’ hands and feet in this world. This really helped Finn understand this concept.”