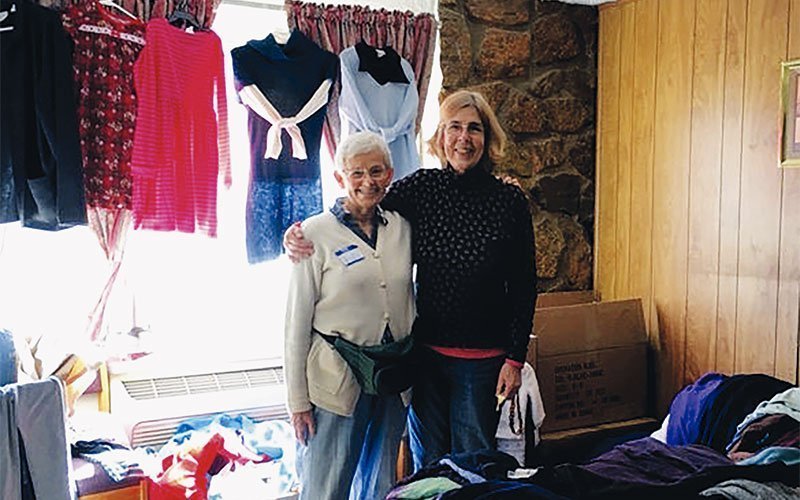 It appears to Anne Meyer-Wilber that these days there are two distinctly different versions of the United States of America.

Stories broadcast daily on the nightly news tell of a nation torn by hate, violence and fear, she said. The other version is the one Meyer-Wilber found a few months ago in the border city of El Paso, Texas, where she spent three weeks serving immigrants who had traveled to the United States from Central America with nothing but the clothes on their backs.

“That’s the America I want to be connected with,” Meyer-Wilber recently told the Catholic Courier. “I came home so thankful to be part of that America. It really renewed my faith in humankind.”

Late in 2018, frustration over news reports about the treatment of immigrants at the United States’ southern border spurred Meyer-Wilber to action.

“I thought, ‘There’s got to be something I can do,’” recalled Meyer-Wilber, a member of Our Lady of the Lakes Catholic Community in the Finger Lakes.

On Jan. 10 she traveled to El Paso to work with Annunciation House, a 41-year-old organization that welcomes and serves immigrant families seeking asylum in the United States. After they have crossed the border and been processed by federal authorities, the immigrants are dropped off by the busload at Annunciation House’s shelters throughout El Paso. The shelter Meyer-Wilber volunteered at was located inside La Mesa Inn.

Volunteers at the small motel took up to 130 immigrants each day, although none of the individuals stayed very long, she said.

One woman, for example, traveled from Guatemala with her two children to join her husband who was already working as a groundskeeper at a hotel in Florida. He already had arranged for his wife to join the hotel’s housekeeping staff, Meyer-Wilber explained.

After the immigrants arrived at La Mesa Inn, volunteers contacted their sponsors, who then purchased and sent tickets for the immigrants to travel to them, usually by bus or train and usually within the next 48 hours. During their stay, each immigrant received a new set of clothes, three meals a day and a warm place to sleep. Rooms with double beds were used to house two families, with each family sharing one of the beds, Meyer-Wilber said.

“They were just so happy to have a safe place to be, a place that had running water, hot water,” she added.

Annunciation House volunteers provided breakfast each day as well as bagged lunches and snacks for the immigrants to take after they left the shelter. Lunches and dinners were provided by a never-ending stream of volunteers, both from the El Paso community and from throughout the United States.

“What really spoke to me was the generosity of the people in El Paso,” Meyer-Wilber said.

Individuals, families, sports teams and youth groups, as well as the staffs of local restaurants, regularly arrived at the shelter armed with food and ready to serve more than 100 people, she said. Other people brought donated clothing for the immigrants, oftentimes arriving just when those items were needed, Meyer-Wilber said.

“Somebody would walk in with no shoes, and we’d go to the clothing room and there was a box, and somebody had just brought 25 pairs of shoes. It just happened like that again and again. God was right there,” she said.

God was present in the immigrants as well, she added.

“For me it was seeing the face of Jesus, it really was, because these people were so gentle and loving. They were so happy to be here and so thankful,” she said.

Meyer-Wilber left El Paso Jan. 31 and arrived back home in Penn Yan the next day, and within a week people from five different local organizations had approached her and asked her to speak to their groups about her experiences at the border. Meyer-Wilber agreed to speak to the groups but makes sure her talks steer clear of politics.

“I’m overwhelmed with the response. It’s very humbling for me,” she said.

EDITOR’S NOTE: Meyer-Wilber’s next presentation will take place April 10 at 8 p.m. in Keuka College’s Student Center. The presentation is free and open to the public.