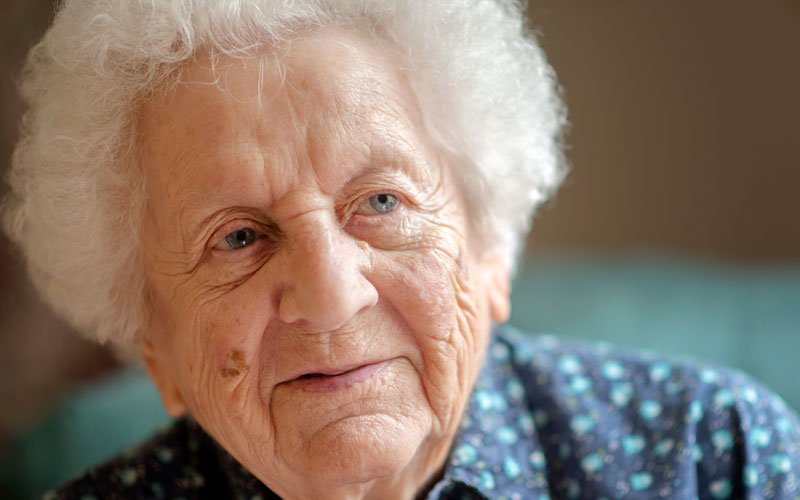 Marie Keefer is the oldest living graduate of St. Michael School in Penn Yan. She will be celebrating her 100th birthday Aug. 10, 2014.

That matter-of-fact statement pretty much sums up Marie Keefer’s thoughts about turning 100 years old on Aug. 10.

“Everyone seems to be living longer,” she told the Catholic Courier during a July 8 interview in her room at St. Mark’s Terrace in Penn Yan, where she’s lived for the past 27 years. “To tell you the truth, I don’t really think about being 100. I don’t feel 100. I’d just as soon forget the whole thing.”

Those sentiments are not shared by Keefer’s friends, including Suzanne McNeil, who brings Communion to Keefer each Tuesday. The two women share a strong connection to St. Michael School in Penn Yan. McNeil retired from a 41-year teaching career at the school on June 11, and Keefer is the school’s oldest living alumnus. Current St. Michael students made birthday cards for the centenarian before school let out in June and planned to present them to Keefer on Aug. 5.

St. Michael School always will hold a special place in her heart, said Keefer, who can remember every teacher she had from the time she entered first grade at the school in 1919 until her graduation from eighth grade in 1927. In those days the school was staffed by women religious, and each sister taught two grades in the same classroom. Keefer said her classmates often wondered whether her teachers had hair underneath their veils, and she has vivid memories of her fifth- and sixth-grade teacher playing baseball with students at recess, veil flying in the breeze as she ran the bases. The nuns were all business in the classroom, however.

“It was just plain study all the time,” recalled Keefer, who attended Penn Yan Academy after graduating from St. Michael. “It was strictly study, but it was worth it. When we got up to the Academy, we were ready for it. We knew how to study.”

School was a much different experience in the 1920s, Keefer noted. St. Michael did not have a cafeteria and there were no school buses, so students ate lunch at home and made the trip between school and home four times each day.

“There were no snow days. If it snowed you just put on your galoshes and walked,” said Keefer, who was known in those days as Marie Cougevan.

The 16 students in Keefer’s graduating class shared a strong bond, she said as she talked about a classmate who went on to become a shoe repairman. Years later, whenever he saw Keefer enter his shop he’d call out, “Remember ’27!” in reference to their graduation year, she said. The school’s close-knit environment is one thing that hasn’t changed over the years, McNeil noted.

“I think even today the kids at St. Michael’s have a strong bond,” she said.

“It was always a great place,” Keefer added. “There was just something about it. I’m very thankful for my days at St. Michael’s.”

Those days prepared her to be successful at Penn Yan Academy, and upon her high-school graduation she was offered a scholarship to Nazareth College in Pittsford, which was still a relatively new institution. She had to turn it down, however, because her older sister was already away at college and Keefer was needed at home. Her mother had cancer and was very ill, so Keefer took care of her two younger brothers and took her mother by train to doctor appointments at Roswell Park Cancer Institute in Buffalo. Her mother passed away when Keefer was 22. Many years later, one of Keefer’s brothers thanked her for taking care of her siblings after their mother passed away. Her other brother added, “Marie took care of everyone,” she recalled.

She was always a hard worker. Her first part-time job was at a law office, and she followed that up with a full-time job at a local municipal office, where she earned $18 every two weeks. She later worked at the Penn Yan Bus Co. for several years before taking a job at DuPont, where she worked for 20 years. She saved newspapers, aluminum and grease during the Great Depression and sold war bonds in the post office and the bank while the United States was embroiled in World War II. She met William Keefer shortly after the war ended, and in 1946 they were married in the rectory at St. Michael Parish, where she’d been a parishioner since birth.

When her husband died in 1969 at the age of 56, Keefer took on all of the household responsibilities and learned to drive. She volunteered at the Peppermint Parlor snack bar and gift shop at Penn Yan’s Soldiers and Sailors Memorial Hospital for 36 years. She retired from volunteer work at the age of 89, when macular degeneration impaired her vision. That degeneration has robbed Keefer of the simple pleasure of reading the newspaper, but she keeps up to date on current events by listening to the news on the television.

“When I listen to the news, I just think it’s such a different world than I grew up with,” she remarked.

When asked if she has any advice for young people growing up in today’s world, Keefer paused for a moment.

“Just be kind to people,” she finally said. “Enjoy the smaller things in life.”