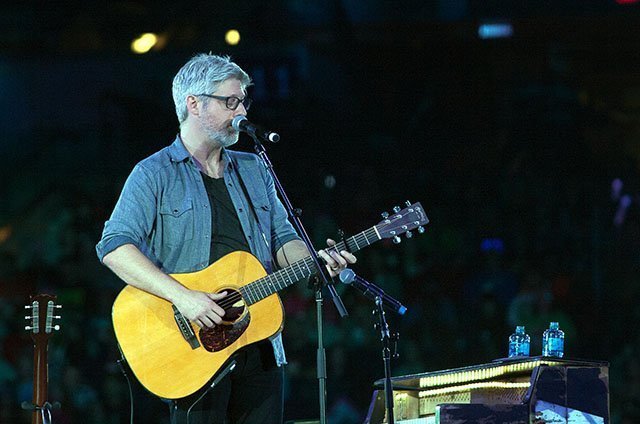 Matt Maher performs at the National Catholic Youth Conference in Indianapolis in November, 2013. Maher will be one of several musicians performing at a Sept. 20 Catholic music festival in Pennsylvania.

PAOLI, Pa. (CNS) — The Norbertine Community of Daylesford Abbey in Paoli is expecting a crowd of 1,500 people for a Sept. 20 Catholic music festival organized as "a response to the repeated call of the Catholic Church for a new evangelization."

The festival "will be a day for Catholics to celebrate the truth and beauty of the Catholic faith, and experience the power of uplifting, Christ-centered music and inspiring prayer to unite festival attendees more closely with God and one another," said an announcement about the event.

The "Abbey Faith & Music Fest" will feature Catholic singers and songwriters Matt Maher and Audrey Assad and several other performers.

"The power of music has an undeniable ability to move the soul of the listener," said Norbertine Abbot Richard Antonucci. "Music that glorifies God and stirs the soul is an instrument to bring people to the Lord and to build unity."

The daylong event will include food, speakers, eucharistic adoration, opportunities for confession and a Mass to be celebrated by Abbot Antonucci.

Daylesford Abbey, a community of priests, brothers and lay associates, is located on 130 acres of countryside in Philadelphia’s western suburbs.

The Norbertine order, which was founded in France in 1121 by St. Norbert of Xanten, established the Paoli community in 1956. It moved to its current location in 1963. The first Norbertine community in the United States was established in DePere, Wisconsin, in 1893.

The order’s charism is "one of common life, prayer and ministry marked by fostering peace, healing and reconciliation."

Editor’s Note: Details about the music fest are available at www.theabbeyfest.com.