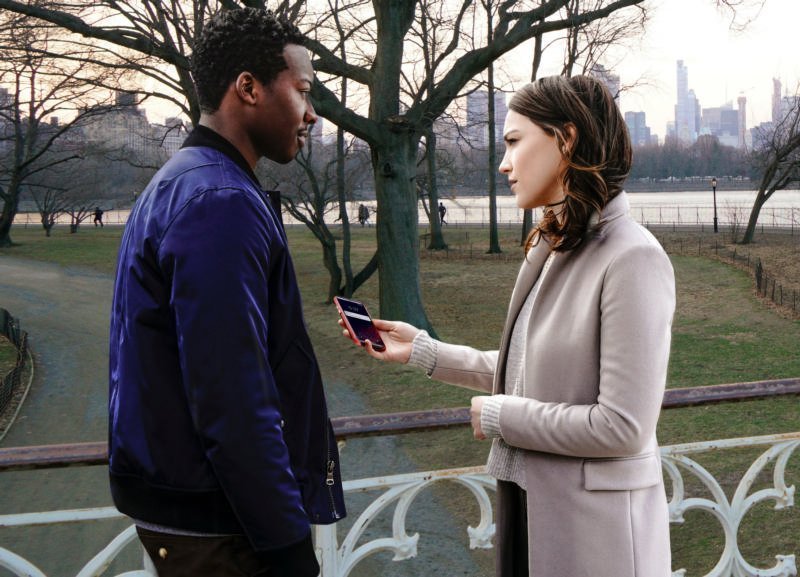 Brandon Michael Hall and Violett Beane star in a scene from the television show "God Friended Me." The CBS premier is Sept. 30. (CNS photo by CBS Entertainment)

With “Scandal” having ended last season, Morton was left with nothing to do. But a script came to him with an intriguing concept: A professed atheist who podcasts his lack of belief gets a Facebook friend request from God. The atheist accepts it, and before long starts seeing how interconnected people are to each other without even realizing it.

Morton isn’t the atheist in question; that role belongs to Brandon Micheal Hall. Rather, Morton plays the atheist’s father — a minister at a New York City church who has lamented how his son has turned away from God.

“I wanted to buy a house, so I wanted another job,” Morton told Catholic News Service in a Sept. 24 phone interview from New York City, where the show is filmed, shortly before he was due back on the set.

But not just any other job. “I wanted something that would be diametrically opposed to ‘Scandal.’ I was really attracted to the show, of people going out of their way to help other people, and the prospect that somehow we’re all connected,” he said. Given the tenor of the times, and “the atmosphere in general that we’re going through these days, this kind of show is just the thing.”

Morton said his character, the Rev. Arthur Finer, will have his own crosses to bear on “God Friended Me.” “There’s two things we’ll be dealing with,” he noted. First is “that gap” between father and son that “has to be closed in some sort of way.”

Second is the backstory affecting both the reverend and his two grown children; the character of the preacher’s daughter (Javicia Leslie) also is a series regular.

“We will look at him as a human being,” Morton said. “What has he gone through? He’s lost his wife when his children were very young. Did he did do a good job (raising them on his own)? Did he not do a good job? What is his life now that he’s been a single parent for so many years?”

He told CNS the show, which was filming its eighth episode at the time of the interview, is not merely a matter of the writers dropping off the script for that day’s filming and leaving it to the actors to say their lines.

“There has been a lot of talk even before we started shooting,” Morton said. “We talked to them about what their ideas were. It was a real collaboration from beginning to end. To enhance and imbue these characteristics is what we’re attracted to.”

He cautioned: “We’re not ‘Touched by an Angel,'” a hit on CBS 20 years ago. “We are not that show. This is not a show that is about God as it is a show about how people can help one another — again, how connected we all are” as opposed to people “floating around on a little island without any connection to anyone,” Morton said, adding, “It’s a need we have: to re-examine and redefine how closely we interact.”

Lofty goals indeed, but “God Friended Me” is going up against NBC’s juggernaut “Sunday Night Football.” However, Morton has a counter to even that argument about the scheduling affecting the new show.

“When you have a group of actors who are about telling the story, not ‘I’m supposed to be first,’ functioning like a healthy family, trying to tell these stories, I think that’s such a great formula for success,” he said. “That’s why these Sunday shows do so well.”