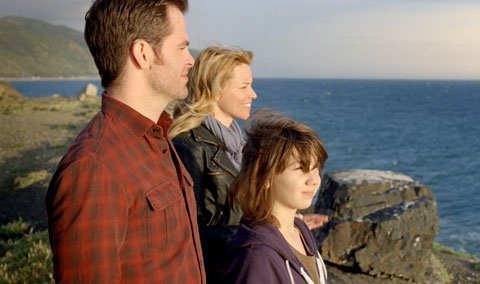 NEW YORK (CNS) — Based on real events and aimed at intelligent, mature audiences, "People Like Us" (Disney) can, refreshingly, be read as emphasizing the first word in its title.

Thus, as directed and co-written by Alex Kurtzman (in collaboration with Roberto Orci and Jody Lambert), this low-key blend of comedy and drama features no explosions, car chases, aliens, comic-book superheroes or, for that matter, four-letter-word-spouting teddy bears. Instead it showcases some fine acting and delivers a thoughtful — if not always entirely plausible — examination of its main characters’ struggle to overcome a legacy of family dysfunction.

We can see some of the results of that blighted heritage in the behavior of fast-talking, 20-something businessman Sam (Chris Pine) to whom early scenes introduce us. Basically good-hearted, but less than scrupulous, Sam specializes in wholesale barter, and is under investigation by the feds for his fast-and-loose flouting of various regulations. He’s also up against significant financial reversals.

In the midst of all that, Sam’s live-in girlfriend Hannah (Olivia Wilde) passes on the news that his father, from whom Sam has long been estranged, has died. Traveling back to his hometown with Hannah in tow, emotionally conflicted Sam uses underhanded means to avoid having to attend the funeral. In return for this slight, his tardy arrival is greeted by a slap in the face from his understandably irritated mom, Lillian (Michelle Pfeiffer).

Something more akin to a sucker punch awaits Sam as he gradually discovers, in the wake of a one-on-one meeting with his dad’s lawyer, that he has a 30-year-old half-sister named Frankie (Elizabeth Banks), and that two-timing Pa, a successful but self-absorbed music producer, left secret instructions for Sam to convey a large cash bequest to her.

Given how much he could use the money himself, this sets up quite the moral dilemma for Sam. But as he gets to know his struggling sibling — Sam contrives to cross her path as though he were a chance acquaintance — less selfish considerations come to the fore. All the more so, because Sam begins to bond with Frankie’s troubled preteen son Josh (Michael Hall D’Addario).

Conceived while his mom, a recovering alcoholic, was in the midst of a binge of drinking and anonymous sex, Josh doesn’t know who his father is because Frankie can’t say for sure herself. So his need for a male mentor to guide him back to the straight-and-narrow is patent. Scarred by his own dad’s parental deficiencies, Sam willingly plays the role of big brother/father figure to the lad.

Since Sam keeps delaying the big reveal, and persists in posing as nothing more than a would-be friend, Frankie, not surprisingly, starts to imagine an entirely different role for him in her life. This needlessly prolonged case of mistaken identity comes across as increasingly unrealistic on one level and as at least notionally icky on another.

But, of course, things get wrapped up without anything remotely untoward transpiring.

While certainly not fit fare for youngsters, this generally warm offering will likely win over those adult viewers not deterred by the elements listed below.

The film contains cohabitation, brief semi-graphic sexual activity, drug use, an addiction theme, a few instances of profanity, at least one rough term and considerable crude and crass language. The Catholic News Service classification is A-III — adults. The Motion Picture Association of America rating is PG-13 — parents strongly cautioned. Some material may be inappropriate for children under 13.