People of all faiths gather to pray for Ukraine - Catholic Courier 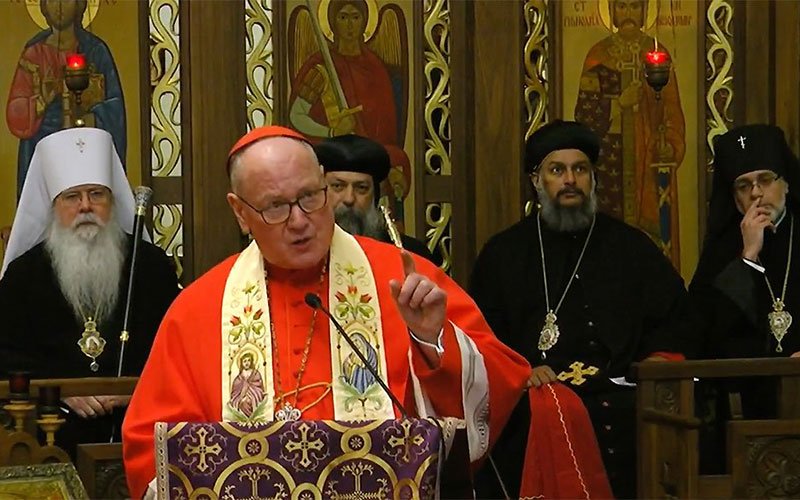 Amid ongoing Russian attacks on Ukraine, Catholic and other faith leaders and parishioners across the United States have been gathering to pray for peace.

In New York City, religious leaders, politicians and diplomats gathered at the Ukrainian Orthodox Cathedral of St. Volodymyr for an intercessory prayer service March 9 to show their support for Ukraine.

Greek Orthodox Archbishop Elpidophoros of America acknowledged the horrors already visited on Ukraine in less than two weeks of war, but “during each of our worship services, we pray for the peace of the whole world.”

“Peace is more than the balance of power and the absence of war,” he said. “It is a state, a state by which God’s presence reveals itself. For Christ is our peace, writes St. Paul.”

Moreover, he counseled, “we are called not only to forgive our enemies but to love our enemies. We can take it one step further. Let us see no enemy in any of our sisters and brothers. Let the love of Christ break down all barriers.”

Cardinal Timothy M. Dolan of New York attended the service and noted: “God can bring good out of evil. We are seeing raw evil in Ukraine in its irrational invasion” by Russia, but “are we not also seeing radiant good, in that the world as united as never before?”

At a March 6 ecumenical prayer service at the Basilica of St. Mary in Minneapolis, Father Ivan Shkumbatyuk, a Ukrainian Catholic priest, said of Russia’s assault on Ukraine: “This is not a war of aggression.”

Instead, the attacks are the destruction of the Ukrainian nation, its history and identity, he said.

Father Shkumbatyuk, pastor of St. Constantine Ukrainian Catholic Church in Minneapolis, asked God to send wisdom and reason so that dialogue would prevail over power.

He also urged the congregation of about 200, including some wearing traditional Ukrainian attire, to let their voices be heard. “We cannot remain silent and do nothing.”

The prayer service was led by local faith leaders, including Archbishop Bernard A. Hebda of St. Paul and Minneapolis.

Those in attendance included Jeff Fink, a parishioner of Risen Savior Parish in Burnsville, Minnesota. He said he served in Vietnam, and if he were 30 years younger, he would try to find a way to get to Ukraine to help.

That’s not an option now, he said, noting that taking part in the prayer service seemed like the least he could do.

“I needed to come here and pray for their cause,” he told The Catholic Spirit, archdiocesan newspaper of St. Paul and Minneapolis.

Marzena Laugen, a parishioner of Holy Cross in Minneapolis who emigrated from Ukraine, said it is important to support the Ukrainian people through prayer, penance, almsgiving “and asking our Lord for mercy.”

The small church overflowed with parish members and others who came to show their support for the Ukrainian community.

“This visit is an opportunity for us to pray together as God’s people and ask him to give us peace and an end to this terrible war, ” the bishop said. He added that it was also a chance to “give solace — for many people here have relatives and friends who are still in Ukraine — (and) ask God to bless them and help them.”

Parishioners of St. Sophia have spent the days since the Russian invasion praying with while battling anxiety and fear for their loved ones and their homeland.

Marta Petrash, a St. Sophia parishioner, grew up in Ukraine, where her mother, brother, and other relatives and friends still live. Each day she calls her mother, who is staying with relatives in a rural area, where she is fairly safe for now.

However, she has friends in major cities who are sheltering in a neighbor’s basement or in the underground subway stations to avoid shelling.

Petrash, who immigrated to the U.S. in 1991, thinks Russia’s leaders and its army have been surprised at the fierce fighting the invading forces have encountered. “Ukrainian citizens are fighting this war, not just the Ukrainian Army,” she told North Texas Catholic, Fort Worth’s diocesan news outlet.

She said in these troubled times the church community is particularly supportive because “these are hurting times for everyone.”

In his homily, Bishop Olson advised parishioners not to allow hatred for Russian President Vladimir Putin to enter their hearts.

“As we unite in prayer and response to assist the persecuted members of your families, the people of Ukraine, in their deliverance from oppression and war, let us ask God to deliver us from the temptation to hate,” he said.

Father Popov also cautioned against hatred, urging parishioners to do everything they can “not to allow that anger and hatred — that’s a poison you don’t want to let in. Once you let it in, it will grow there; it’s hard to get rid of it.”

“We try to chip in, with prayers, with financial support, whatever we can do to help, yet at the same time not to fill our hearts with despair, hatred, anger,” he added.

For Christians, “There is always hope. … There is light, there is life at the end,” he stated, noting that many of his parishioners are still in a state of shock and disbelief.

Also on March 6, the Pittsburgh-area Ukrainian community organized an interfaith prayer service to be held at St. Paul Cathedral.

“Many times in the past, our varied religious communities have come together to mark a significant time for prayer,” Pittsburgh Bishop David A. Zubik said in a statement.

“As we come together at this time, it is my hope that our gathering will be a source of strength and consolation to our Ukrainian brothers and sisters and be source of hope for us all that peace can make a dramatic return,” he said.

In Denver, the choir at the Cathedral Basilica of the Immaculate Conception posted a video March 2 of its performance of Ukraine’s spiritual anthem, conducted by Phil Bordelaeu, the cathedral’s director of sacred music. The song, which can be viewed at https://youtu.be/Sb2hq4Ahvu4, is a prayer for peace and blessings in Ukraine.

Back in New York, Cardinal Dolan blessed a Ukrainian Cross of Gratitude before Sunday Mass March 6 at St. Patrick’s Cathedral.

The cross, constructed in 2003 in Lviv, Ukraine, began its pilgrimage stop at the cathedral the day before and will remain there for two weeks.

Built in anticipation of the 2000th anniversary of the passion, death and resurrection of Christ in 2033, the cross has traveled to more than 46 countries.

Contributing to this story were Mark Pattison in Washington; Barb Umberger at The Catholic Spirit, newspaper of the Archdiocese of St. Paul and Minneapolis; and Susan Moses, associate editor of North Texas Catholic, the news outlet of the Diocese of Fort Worth.