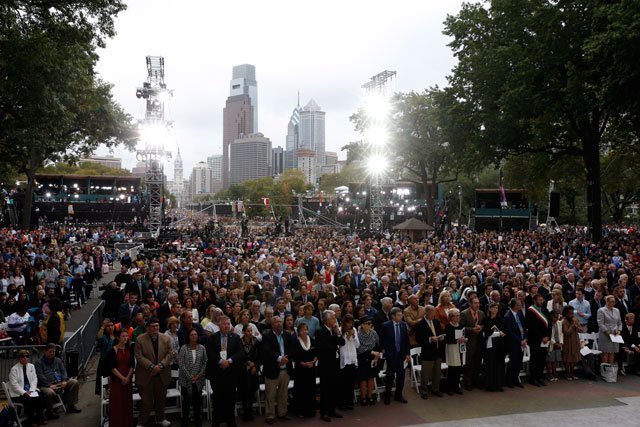 The faithful attend the closing Mass of the World Meeting of Families celebrated by Pope Francis on Benjamin Franklin Parkway in Philadelphia Sept. 27.

WASHINGTON (CNS) — When Pope Francis encountered and blessed children during his apostolic visit to the United States, there were events everyone saw because they were on live TV, with others known only their participants.

These were sometimes by chance. Other times, there was advance planning.

Memorable chance encounters included his blessing of Michael Keating, a 10-year-old boy with cerebral palsy, at the tarmac at Philadelphia International Airport when the pope arrived there for the Festival of Families Sept. 26.

Iris Chavez of Manassas, Virginia, spent three days figuring out how to get her 5-month-old son, Loukas, clad in a tilma, handed up to the pope during the popemobile "parade" outside the White House Sept. 23. When Sophia Cruz, a 5-year-old girl from Los Angeles, broke through security fences at that event to hand the pope a letter about immigrant laborers, it was the result of a full year of planning by an immigrant rights group. "They deserve to come out of the darkness and be recognized for the hard work that they do," Sophia’s letter said.

Janice L. Benton helped plan participation by people with disabilities in the pope’s events in Washington and Philadelphia. Most of that never attracted the same media coverage as the papal hugs and kisses. The participants’ joy, Benton said, was undimmed.

"We built a nice little community, too, which was special for us," Benton said in an interview with Catholic News Service.

There were two goals. First, visibility. At the apostolic nunciature in Washington, Benton, who heads the National Catholic Partnership on Disability, and staff from the Archdiocese of Washington arranged to have groups of schoolchildren with physical and developmental disabilities greet the pope as he left there each day.

She also organized what became a group of 30 who stood across the street from the Basilica of the National Shrine of the Immaculate Conception, as the pope’s motorcade drove up for the canonization Mass for St. Junipero Serra Sept. 23. "We had all kinds of folks. One family who has a son with a rare genetic disorder had driven all the way from Miami. We had one who was blind, one who was deaf, and families with children in wheelchairs who had significant disabilities."

They displayed a banner proclaiming, "Holy Father, thank you for valuing and defending our lives!"

Did the pope see them? "Yes! Yes he did! He looked almost startled, then he broke out into a big grin and gave us a wave," Benton recalled.

She also has a happy memory of one family member of a disabled person being pressed, by a Philadelphia TV reporter, about why it was so important to see the pope in person. She replied, "Seeing him is like being kissed by Jesus."

The second goal was full participation by those with disabilities in both worship and at the World Meeting of Families in Philadelphia.

Before the canonization, several people participated in a Mass at Theological College, a national seminary, at The Catholic University of America with Father Mike Joly, pastor of St. Joan of Arc Catholic Church in Yorktown, Virginia. Joly is blind and uses a Braille Roman Missal.

During the Serra Mass itself, Meghan Jones, who has Down syndrome, was the lector for the second reading from St. Paul’s Letter to the Philippians. A member of St. Francis of Assisi Parish in Derwood, Maryland, she has been an altar server for the past five years at the Washington Archdiocese’s annual White Mass, celebrated for those in the health professions.

Hector Reynoso, who is deaf, read a petition in American Sign Language: "For children everywhere, may they be blessed with good health and caring families." A graduate of Gallaudet University in Washington, he’s a parishioner of St. Francis Deaf Catholic Church in Landover Hills, Maryland.

"The church was vibrant with diversity" at the Serra Mass, and "inclusive of all gifts and abilities. The entire ‘family’ was at the table together," said Mary O’Meara, executive director of the archdiocesan Department of Special Needs Ministries. "Persons with disabilities were welcomed, valued and celebrated," she said later in a statement.

In Philadelphia, Benton presented a workshop at the Pennsylvania Convention Center and there was a special Mass at the National Shrine of St. John Neumann at St. Peter the Apostle Church. "We just extended the invitation, and people came. We had at least 600 there," she said. Three of the priests who concelebrated that Mass are deaf.

Sister Kathleen Schipani, a Sister of the Immaculate Heart of Mary, who is director of the Office for Persons with Disabilities and the Deaf Apostolate for the Philadelphia Archdiocese, supervised the accommodation of disabled Massgoers, Benton explained. "The Mass was captioned on a big TV screen, plus there was an elevated platform so those in wheelchairs and walkers could get up and see."

Benton has been fielding grateful emails from parents ever since. One had been told, by others in their parish, "Don’t bring your boys to church. They’re disruptive." They were overjoyed to experience a welcoming venue in Philadelphia.

She also heard from a mother in Washington, whose pastor at a Mass Sept. 27 asked members of the congregation for reflections on the papal visit. Her disabled daughter stood and said, "The pope loves everyone. He even loves people with brain injuries."

A video to accompany this story can be found at https://youtu.be/WSWpgiW7WDI