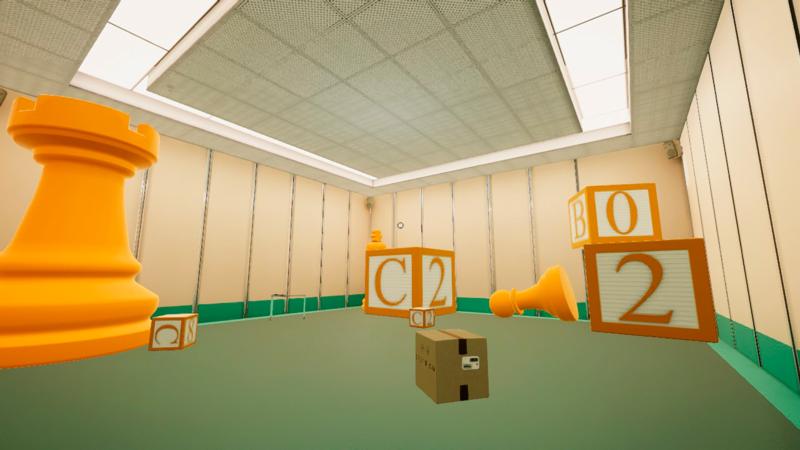 This is a scene from the video game "Superliminal." (CNS photo courtesy Pillow Castle Games)

Aside from brief images of blood that, characteristically, turn out not to be what they seem at first, there is no problematic content in this intriguing title, which is similar to the “Portal” series by Valve or “The Stanley Parable” by Galactic Cafe.

Gamers start out with an introduction video for SomnaSculpt, a sleep-therapy program developed by Dr. Glenn Pierce (voice of Max Howarth). It’s aimed at helping to reduce stress and self-doubt by means of lucid dreaming, the psychological state in which a person is aware that they are in a dream and can, as a result, exert some amount of control over it.

An artificial intelligence orientation program guides the patient through a series of rooms, each with a perception puzzle. Once the gamer is meant to exit the program, however, it becomes clear that something has gone wrong and that Pierce doesn’t know how to wake the player.

As gamers then move through nine different levels, perception becomes their only available tool since certain items can be changed simply by picking them up and looking at them from a different angle. Thus a small triangle of cheese can suddenly become a ramp to a previously unreachable door.

Similarly, an exit sign can be multiplied into smaller versions of itself to build a staircase. Every problem requires thinking in a fresh new manner.

Gamers also are accompanied by the occasional message from Pierce or the AI program. These inject an unexpected degree of humor into the proceedings as the ongoing dream starts to resemble the surrealist artworks of M.C. Escher.

Alongside the technically simple graphics is a soundtrack that beautifully complements the immersion experience. Gameplay can be completed in under three hours, but there’s some room for re-playability as there are in-game achievements to unlock and secret areas to discover.

At times, the player’s path seems dark and the obstacles along it impossible to overcome. Yet, within “Superliminal” simply adopting a new point of view can potentially solve any problem. So, along with the fun of all the shape-shifting objects encountered, there’s a valuable lesson about the importance of innovative thinking and persistence.

Photosensitive gamers should be aware that “Superliminal” includes flashing lights and contrasting visual patterns that might trigger seizures.