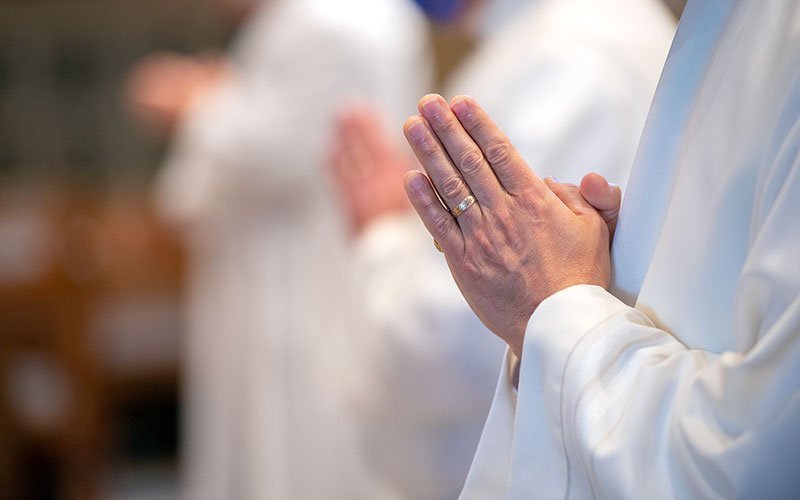 A native of Warsaw, N.Y., Deacon Robert Almeter attended St. Michael School and Warsaw High School prior to earning a degree in chemistry from the State University of New York College of Forestry at Syracuse University.

After college, he worked for General Electric in Schenectady before moving to the Southern Tier, where he worked for International Harvester and later Century 21 in Bath. He then served as a county executive director with the U.S. Department of Agriculture for 24 years.

While with Century 21, Deacon Almeter and his wife attended a Mass at All Saints Parish in Corning during a temporary closing of their home parish, St. Gabriel in Hammondsport. Impressed with the homily given by Deacon Ray Defendorf, the couple spoke after Mass with the deacon, whom they at first mistook for a priest. After Deacon Defendorf explained the role of a permanent deacon, Deacon Almeter himself felt a call to the diaconate.

During his active ministry, Deacon Almeter served at St. Mary Parish in Bath (1996-97) before moving to the Syracuse Diocese, where he was assigned to St. Paul and St. Bartholomew parishes in Norwich. He currently lives in Burlington, Vt., where he serves as a spiritual director for the Diocese of Burlington.

Deacon Larry Casey is a Rochester native and cousin of the late Bishop Lawrence B. Casey, who was auxiliary bishop in Rochester from 1953-66 before becoming Bishop of Paterson, N.J.

Deacon Casey attended Aquinas Institute in Rochester and SUNY Brockport. After taking an early retirement from Kodak, he earned a master’s degree in clinical social work from the University of Buffalo, commuting every day from his family’s home in Albion.

At the suggestion of priests in Albion and Rochester, Deacon Casey decided to join the permanent diaconate of the Diocese of Rochester. During his active ministry, he served at Church of Transfiguration in Pittsford (1991-96) before moving to Blairsville, Ga., where he served the people of St. Francis of Assisi Parish.

Deacon Michael Mangione admitted that he didn’t realize he was celebrating a milestone ordination anniversary this year.

A native of Rochester, Deacon Mangione grew up in Our Lady of Mt. Carmel Parish. He went on to Indiana State University, then joined the U.S. Air Force and was stationed in northern Thailand during the Vietnam War.

Upon returning to Rochester, he worked for the Rochester Telephone Co. and then embarked on a career in insurance.

Following ordination, he served the parishes of St. Catherine, Addison;St. Stanislaus, Bradford;and St. Joseph the Carpenter, Campbell, for a year. He then served at St. Mary of the Lake, Watkins Glen (1992-94), and St. Anthony/St. Patrick, Elmira (1994-2001). In 2001, Deacon Mangione served at Elmira Psychiatric Center, where he counseled youths and older adults.

He said one of his most rewarding experiences took place when he began serving the Ithaca College Catholic community and a student asked him if he remembered him.

“He was a youth that I saw at the psychiatric center, and today, he’s a doctor,” Deacon Mangione recalled.

Deacon Mangione retired from his insurance business in 2006 and remains active with the Cornell University and Ithaca College Catholic communities, which are both currently celebrating Masses at Immaculate Conception Church in Ithaca due to the COVID-19 pandemic.

“It has been different,” he said.

Deacon Mangione resides in Painted Post with his wife, Joan.

Deacon Patrick Shanley agreed that the past 30 years as a permanent deacon have gone by quickly.

“It seems like it has been 30 minutes,” he remarked.

Deacon Shanley grew up in Rochester, and studied psychology and religion at St. John Fisher College in Pittsford. Prior to becoming a deacon, he served as pastoral associate at Holy Apostles Church in Rochester from 1984-91.

In 2006, Deacon Shanley began chaplaincy work, serving the residents and staff at St. John’s Home in Rochester. That same year, he was assigned to St. Jude the Apostle Church in Gates and, in 2010, was assigned to the Gates Catholic Community, which comprised St. Jude, Holy Ghost and St. Helen churches. The churches became the Parish of the Holy Family in 2016 and, in the spring of 2020, the parish closed two its worship sites, St. Helen and Holy Ghost. Last year, the parish community also suffered the sudden loss of its pastor, Father Michael Schramel.

In addition to his ministries at the Parish of the Holy Family, Deacon Shanley performs chaplaincy work at Rochester Regional Health’s ElderONE.

“There were a lot of changes,” he said, noting that he was conducting ministry over the phone at the height of the COVID-19 pandemic. Previously, he said, “I never prayed with someone over the phone.”

Deacon Shanley and his wife, Jeanne, have three children and three granddaughters.

Deacon Francis Haber graduated from the State University of New York at Buffalo in 1956. At the time he was ordained to the diaconate, he worked as an anesthesiologist for Arnot-Ogden Medical Center in Elmira.

He continued to work at the medical center while ministering at St. Mary of the Lake in Watkins Glen from 1996-2004.

The call to the diaconate came for Deacon Raymond Mielcarek after traveling to developing nations as a part of his duties as an engineering manager with Harris Corp. He later would recall the poverty he witnessed, drawing a parallel to the needs of those in living in the Rochester Diocese.

At the time of ordination, Deacon Mielcarek worked as a transportation coordinator for the Jewish Home of Rochester. His first diaconal assignment was at Holy Trinity in Webster (1996-97). The following year, he served at St. Stanislaus Kostka Church in Rochester (1997-2004) before returning to Holy Trinity (2005-11) until he reached senior status.

Thereafter, Deacon Mielcarek served as a retired deacon at St. Stanislaus Kostka until 2020.

He and his wife, Victoria, have been married for 65 years.

The following deacons also are celebrating their anniversaries of ordination this year: