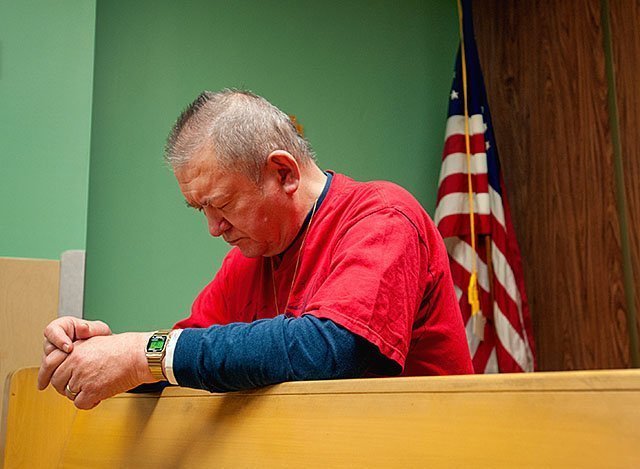 U.S. Army veteran Richard Paul Engel bows his head in prayer during an Oct. 15 Mass inside the chapel at the Canandaigua Veterans Affairs Medical Center.

When Deacon Dave LaFortune and Father Jim Jaeger affirm the value of Veterans Health Administration support, they do so for highly personal reasons.

The pair serve as pastoral administrator and sacramental minister, respectively, for St. John Vianney Parish (St. Mary, Bath/St. Gabriel, Hammondsport). They’re also linked in several ways through the United States military, beginning with the fact they’re both Air National Guard veterans. Father Jaeger is a recently retired chaplain for the Guard and currently serves as part-time chaplain at the Veterans Affairs Medical Center in Canandaigua, where he will celebrate Mass on Veterans Day, Nov. 11, at 11 a.m. in the Building 3 chapel. Father Jaeger’s parents were both nurses in the same Canandaigua hospital, providing what their son describes as the inspiration for his own life of service.

In an interesting coincidence, Deacon LaFortune said it’s likely Father Jaeger’s mother cared for his own brother at some point. John LaFortune, now 62, was diagnosed with paranoid schizophrenia while serving with the Navy in Vietnam and was subsequently discharged for medical reasons. For the past four decades he has resided at VA facilities; after living for many years at the Canandaigua VA he is now at a group home near Ovid.

"It was fortunate for our family that he was able to receive the wonderful care he received. So many people do not have that," said Deacon LaFortune, who served for six years in the Louisiana Air National Guard.

Canandaigua is one of two VA hospitals located in the Diocese of Rochester. The other is in Bath, where both Father Jaeger and Deacon LaFortune provide occasional spiritual and sacramental support due to its location within their Steuben County parish. There also are several VA outpatient clinics located around the diocese. Deacon LaFortune added that the VA offers "a very large umbrella of group homes" similar to the one in which his brother lives. He also noted that the VA offers specialty care, such as the hospital in Buffalo where his brother has gone during the past year for cancer treatments.

VA facilities assist veterans not only with their physical well-being, but also such issues as stress, anger, family discord and employment. For example, "I know a number of people who are outpatients at the Bath VA and have been suffering from post traumatic stress disorder in the last couple of years," Deacon LaFortune remarked. 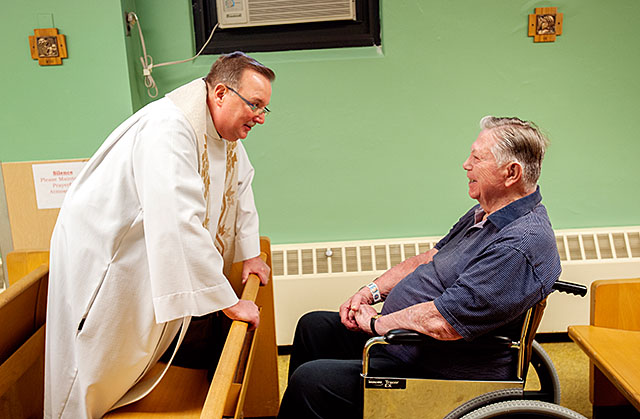 Father James Jaeger (left), who serves as a part-time chaplain at the Canandaigua Veterans Administration Medical Center, talks with U.S. Marine veteran John J. McLoughlin after an Oct. 15 Mass at the chapel inside the VA.

Father Jaeger said VA patients find comfort among fellow veterans because they can share experiences they might not be willing to talk about with others. He noted another bonding experience: Vietnam veterans volunteering at the VA, helping younger vets as well as those from World War II who are in wheelchairs. Father Jaeger added that many young-adult VA patients — including an increasing number of females — have recently returned from Afghanistan, Iraq and other centers of political and military unrest.

In his role as chaplain, Father Jaeger said he provides spiritual care not only for patients, but all who are connected with VA facilities.

"All those workers, professionals, families and patients — they’re like a community in a city unto itself," he remarked, noting that he holds all VA workers in high esteem "for the great love and care they bring our veterans in the system. We have wonderful places here in Bath and Canandaigua that truly go above and beyond their employment duties. The health care that our veterans receive is nothing but the best of the best."

However, Deacon LaFortune said there are not enough veterans accessing the VA services to which they’re entitled: "I do suspect there are a lot of people in communities throughout the diocese in need of help." He and Father Jaeger said some veterans may have transportation issues; others need assistance with the application process; and others may just be reluctant to come forward.

"They say, ‘We don’t want to ask for anything, we don’t want to be a burden,’ but here they made many sacrifices and many are wounded. It’s the care they need and that we should be giving them," Father Jaeger said.

Father Jaeger and Deacon LaFortune stressed that whatever changes are made in this era of sweeping health-care reform, it’s vital for services involving the military to emerge unscathed.

"We owe it to them," Deacon LaFortune said. "We ought to be thankful that there are all those people who served in whatever capacity they did."

EDITOR’S NOTE: On the weekend of Nov. 9-10, numerous parishes across the diocese will take part in a special national collection for the Archdiocese for the Military Services. The archdiocese provides spiritual and sacramental support for men and women in the U.S. armed forces, including active military personnel as well as people living in VA facilities.