Peter and John speak to the Sanhedrin - Catholic Courier 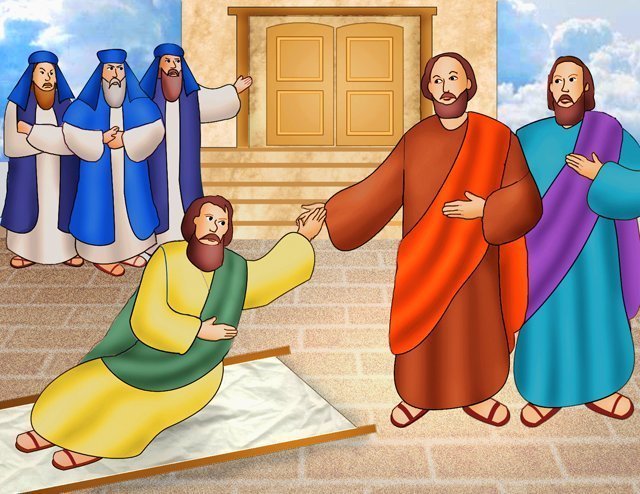 Peter and John speak to the Sanhedrin

Peter and John speak to the Sanhedrin

Every day, a man who was crippled since birth would beg for money outside the Jerusalem temple’s Beautiful Gate. One afternoon, Peter and John went to the temple to pray and walked past the man on their way through the gate.
The man asked Peter and John for money. Instead, Peter said to him, “In the name of Jesus Christ the Nazorean, (rise and) walk.”
Peter took the man by the hand and helped him up. The man began walking and jumping and praising God. When others at the temple heard him, they gathered around. They recognized the man as the crippled beggar and were shocked.
“You Israelites, why are you amazed at this, and why do you look so intently at us as if we had made him walk by our own power or piety?” Peter asked the people.
He explained that it was through Jesus, the resurrected Messiah, that the man was healed.
As Peter was talking, he and John were seized by the priests, the captain of the temple guard and the Sadducees. The next day, Peter and John were questioned by the members of the Sanhedrin, who demanded to know by what power or name the man was healed.
“All of you and all the people of Israel should know that it was in the name of Jesus Christ the Nazorean whom you crucified, whom God raised from the dead,” Peter answered with help from the Holy Spirit. “He is ‘the stone rejected by you, the builders, which has become the cornerstone.'”
The Sanhedrin sent Peter and John away and talked among themselves. They were worried more people would listen to Peter and John and believe in Jesus.
They called Peter and John back and ordered them to stop teaching and speaking in Jesus’ name.
Peter and John refused.
“Whether it is right in the sight of God for us to obey you rather than God, you be the judges. It is impossible for us not to speak about what we have seen and heard,” they said.
The Sanhedrin finally released Peter and John because they found no way to stop them or to punish them, because all the people were praising God over the crippled man’s healing.
READ MORE ABOUT IT:
Acts 3 and 4
Q&A
1. Whom did Peter heal?
2. What did the Sanhedrin want Peter and John to stop doing?

It was very hard being the first Christians. The apostles were always in danger of being put in jail or brought before the Sanhedrin. But that didn’t stop them from teaching and healing in Jesus’ name. When Peter and John were first told to stop doing things in Jesus’ name, they went back to the group of people who believed in Jesus, and they all prayed together for help from the
Holy Spirit.

As the Christian community began to grow, The Twelve realized they needed some more help. Several spirit-filled men with good reputations were chosen. Among them was a man named Stephen.

Stephen worked many wonders as he preached about Jesus. What he said angered some people, so they told lies about what he was saying. This made many others mad at Stephen, so much so that he was brought before the Sanhedrin. When Stephen stood up for Jesus before the Sanhedrin, everyone who heard him became even angrier. They took him outside of Jerusalem and stoned him to death, and Stephen became the first Christian martyr.

St. Waldetrudis was born in Belgium in the seventh century, the daughter of two saints, Walbert and Bertilia. She married a nobleman, and together they had four children and lived a happy life doing good works.

When her husband decided to become a monk, Waldetrudis decided a couple years later that she would live by herself in poverty and simplicity. Her sister invited her to live in an abbey, but Waldetrudis preferred to stay in the little house she had built. Waldetrudis’ quiet life was interrupted so much that she founded her own convent, which was located in present-day Mons. The saint was very merciful and was known for miracles of healing, even after her death in 688. Along with her parents, her sister, husband and all of her children were also made saints. We remember her on April 9.