Peter doubts Jesus and sinks in the water - Catholic Courier 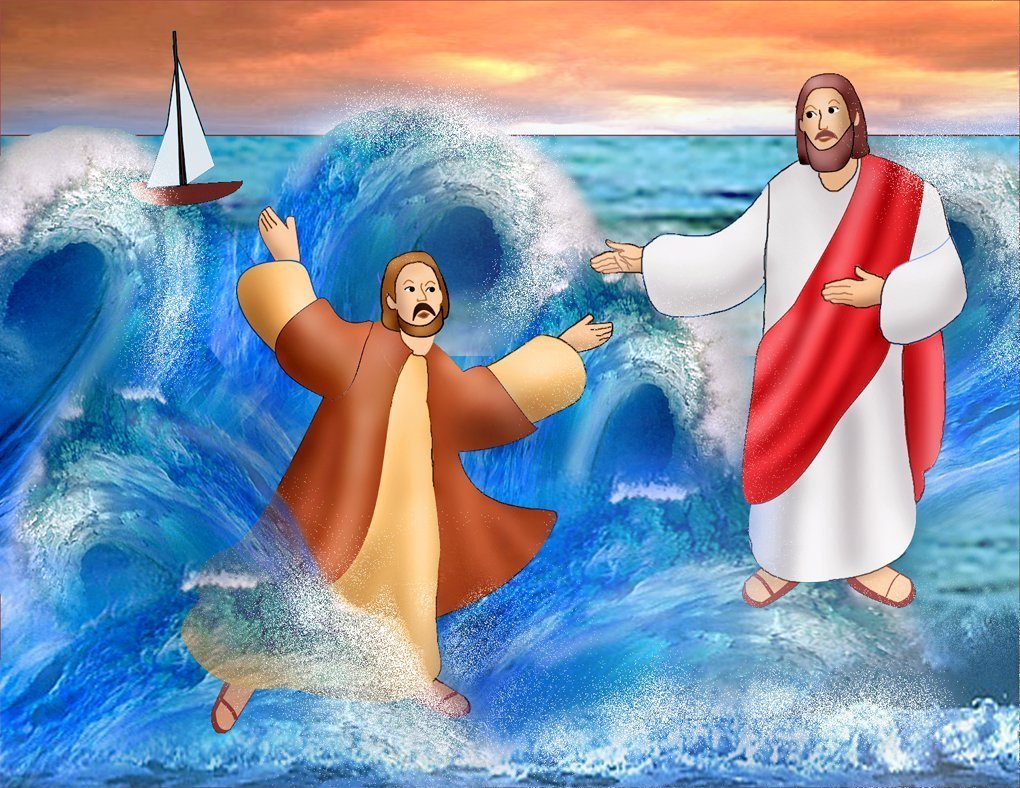 Peter doubts Jesus and sinks in the water

Peter doubts Jesus and sinks in the water

After Jesus had spoken to more than 5,000 people and fed them all from only five loaves of bread and two fish, he told his Apostles to get into a boat and sail to the other side of the lake. He would join them later. Then he sent the crowd of people home. He wanted to be alone so he could pray in private, so he walked to a quiet spot on the mountain.

By the time he reached the mountain, it was nighttime. Although the air was cool, the winds were becoming stronger. Jesus did not mind, and he continued to pray. However, on the lake the winds were tossing the boat that carried the Apostles, pushing it up and dropping it down again.

As the dark enveloped the boat and the winds blew it where it wanted, Jesus continued to pray until it was very late. Then he set out to meet his Apostles. But he had no boat, so he walked across the water.

The disciples were fearful enough because of the windstorm, but when they saw a figure walking across the water, they were terrified. “It is a ghost,” they cried out in fear.

Jesus heard the distressed cries of his friends, so he walked over toward the boat. “Take courage,” he called out to them, “it is I; do not be afraid.” Peter was not sure if it really was Jesus, a ghost or something else, so he answered, “Lord, if it is you, command me to come to you on the water.” Jesus called out to Peter, “Come.”

Peter stepped over the edge of the boat and onto the water. He walked on it as if it were dry land. But the wind was still blowing with great strength and Peter became afraid. He started to sink. “Lord, save me!” he cried.

Jesus reached out his hand and pulled Peter up. Peter was no longer sinking, and his feet once again stood firm on the surface of the water. “O you of little faith,” Jesus said to him, “why did you doubt?” Jesus and Peter climbed into the boat to join the other disciples.

Even though the disciples had seen Jesus heal the sick and feed multitudes with only a little food, this feat amazed them. They bowed down before him and said, “Truly, you are the Son of God.”

READ MORE ABOUT IT:
Matthew 14

Q&A
1. Why did Jesus want to be alone?
2. When did Peter start to sink in the water?

In 1986 Pope John Paul II commissioned 12 cardinals and bishops to prepare for a project to revise the Catechism of the Catholic Church. They were assisted by seven other diocesan bishops who were experts in theology and catechesis, and many other religious scholars also were consulted.

In his apostolic letter contained in the revised edition, the pope wrote, “It can be said that this Catechism is the result of the collaboration of the whole Episcopate of the Catholic Church, who generously accepted my invitation to share responsibility for an enterprise which directly concerns the life of the Church.”

The Catechism of the Catholic Church is one of the most important religious books available to us as Catholics.

When Clare Offreduccio (1193-1253) was 18 years old, she heard St. Francis preach in the nearby town of Assisi, Italy. She talked with him in private after his sermon, and he encouraged her to follow Christ above everything else.

On Palm Sunday in the year 1212, Clare again met St. Francis. He cut her hair, gave her his own penitential habit and brought her to the Benedictine convent of St. Paul.

Clare followed the example of St. Francis by taking a vow of poverty. She and her followers never wore shoes or any other covering for their feet. She also spoke only when necessary. Clare eventually rose to the position of governess of the convent of San Damiano. The nuns under her charge became known as the Poor Clares.