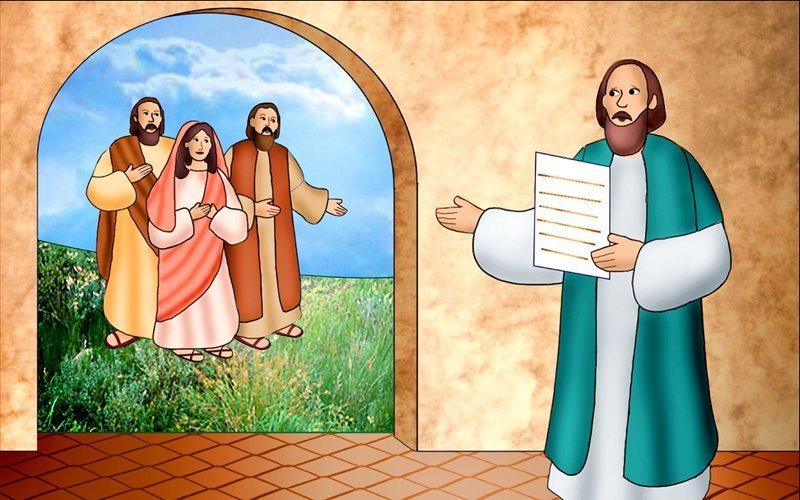 Peter encourages the Christians in Asia

Bible Accent: School in the synagogue

Peter encourages the Christians in Asia

Peter had been chosen by Jesus to be one of his Twelve Apostles. Peter had left his father’s fishing business to follow the call of the Lord. There were times when Peter disappointed Jesus, such as when he denied knowing Jesus after Jesus had been arrested in the garden. But Peter cried bitterly with shame and sorrow, and he knew God had forgiven him.

When the Holy Spirit came down upon the disciples on the day of Pentecost, Peter was there. He also was the first to try to explain what was happening to the people who had gathered outside the house where the disciples and other believers had been praying. And now Peter felt he should write a letter to some of the Christians in Asia to help them through a difficult time.

He told them not to be discouraged when their faith was being tested. “In this you rejoice,” he wrote, “although now for a little while you may have to suffer through various trials, so that the genuineness of your faith, more precious than gold that is perishable even though tested by fire, may prove to be for praise, glory and honor at the revelation of Jesus Christ.”

But Peter did not want the Christians — or “chosen sojourners,” as he called them — to think that following Jesus might not require some effort to examine their own lives. “Rid yourselves of all malice and all deceit, insincerity, envy and all slander,” he told them, “like newborn infants, long for pure spiritual milk so that through it you may grow into salvation, for you have tasted that the Lord is good.”

Peter knew as the early Christians tried to live in peace, there would be people who wanted to argue with or criticize them. “Do not be afraid or terrified with fear of them, but sanctify Christ as Lord in your hearts. “Always be ready to give an explanation to anyone who asks you for a reason for your hope, but do it with gentleness and reverence, keeping your conscience clear, so that, when you are maligned, those who defame your good conduct in Christ may themselves be put to shame.”

READ MORE ABOUT IT:
1 Peter chapters 1-3

Bible Accent: School in the synagogue

When Jesus was a boy he went to a school in the synagogue. Only boys attended these schools. Girls remained home and learned from their mothers. The boys learned how to read and write, and they practiced reciting and memorizing the Scriptures. Parents were expected to teach their children about the Jewish festivals and customs and to pray the traditional prayers at home. Girls learned how to cook and care for their families, while boys learned a trade or skill so that they would be able to provide for their own families when they became adults.

Religious education is still important to us today, whether we are boys or girls, or whether we attend a Catholic school or go to classes taught by our churches.

Michael Ghislieri (1504-1572) joined a Dominican order when he was only 14 years old. After he was ordained a priest, he taught theology and philosophy, and he served as a leader of the order. In 1556 he was appointed as a bishop, and he quickly rose to the positions of inquisitor general and cardinal. When he was working in Rome on church business, he occasionally disagreed with the opinions of Pope Pius IV.

After the pope died, Michael became his successor and took the name of Pope Pius V. He wanted to implement what he felt were necessary reforms and instead of having an elaborate celebration at his coronation, he gave money to hospitals and needy people. He also did not want to follow the trend of appointing friends and family members to important positions. Giving the people of the church an example to follow, he encouraged them to pray the rosary and to fast. We honor him on April 30.