Peter is told in a vision to visit Cornelius - Catholic Courier 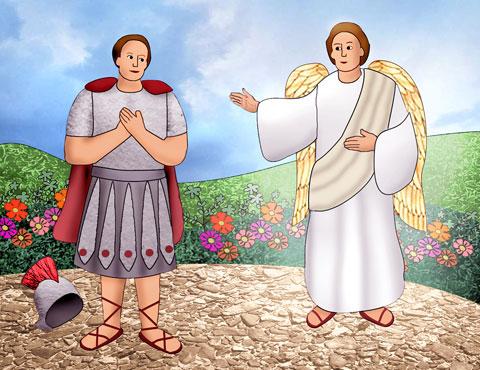 Peter is told in a vision to visit Cornelius

Peter is told in a vision to visit Cornelius

Cornelius was a centurion who believed in God. He prayed every day, and he gave offerings to the Jewish people. One afternoon an angel appeared to Cornelius and said, “Your prayers and almsgiving have ascended as a memorial offering before God. Now send some men to Joppa and summon one Simon who is called Peter.” As soon as the angel left, Cornelius sent two of his servants, along with a soldier, to find Peter.

At noon the following day, Peter went up on the roof to say his prayers when he had a vision. I his vision, he saw animals that, according to Jewish laws, could not be eaten. A voice told him to eat what he saw, but he answered, “Certainly not, sir. For never have I eaten anything profane or unclean.”

The voice replied, “What God has made clean, you are not to call profane.” Three times this happened. As Peter was wondering what the strange vision meant , the voice said to him, “There are three men here looking for you. So get up, go downstairs, and accompany them without hesitation, because I have sent them.”

Peter went with the men to the home of Cornelius. Cornelius told Peter about the visitation by the angel. Then Peter understood the meaning of his own vision, so he said to Cornelius and the members of his household, “In truth, I see that God shows no partiality. Rather, in every nation whoever fears him and acts uprightly is acceptable to him.” Peter summarized how Jesus came to earth and was crucified and rose again, and that Peter had been a witness to all of those things.

While Peter was speaking, the Holy Sprit came down upon those who were hearing him, and they began to glorify God. The men who had accompanied Peter were amazed that the glory of God had now been given to the Gentiles as well. Cornelius and many others were baptized that day.

After Peter had returned to Jerusalem, the Jewish Christians asked Peter about what had happened. Peter explained his vision and what the Lord had done with Cornelius and his family. “As I began to speak,” he told them, “the Holy Spirit fell upon them as it had upon us at the beginning. … If then God gave them the same gift he gave us when we came to believe in the Lord Jesus Christ, who was I to be able to hinder God?”

READ MORE ABOUT IT:
Acts 10 Q&A
1. What did the angel tell Cornelius to do?
2. What happened when Peter spoke to Cornelius and his family?

Bible Accent: Jews and the Gentiles Peter is told in a vision to visit Cornelius

In the Bible, the term Gentile refers to anyone who is not of Jewish descent. When the disciples began to preach to Gentiles as well a Jews, they did not expect the Gentiles who became Christians to adopt the practices of the Jewish tradition. The apostle Paul preached openly against two levels of Christianity, meaning those who were Jewish and those who were not. Instead, in his letter to the Romans, he said God would judge every person “on the basis of faith” and not heritage. The Book of the Acts of the Apostles says that the early followers of Jesus became known as Christians, a term we still use today to refer to people who believe in Jesus.

Antony the Abbot (251-356) was an Egyptian whose parents were Christians. His parents died when he was 20 years old, leaving him a large inheritance and in charge of a younger sister. Before another year had passed he followed the words of Jesus to the rich man, selling his possessions and giving them to the poor. Antony sold most of what he owned, saving only enough to care for himself and his sister. Fearing he may not have done enough, he gave away what he still had, put his sister into the keeping of nuns, and took up a life of solitude, meager rations and religious devotion. In spite of his sparse living he founded a monastery and encouraged other religious during a time of persecution against Christians. He remained a model of faith and courage for monks and laymen until his death. We honor him on Jan. 17.