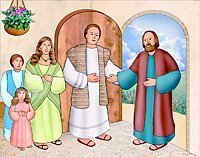 Peter receives a vision from God

Bible Accent: World Synod of Bishops on the Bible

Peter receives a vision from God

Cornelius, a Gentile, was a centurion in the Italica Cohort. He and everyone in his family served God faithfully. He also would pray frequently and give generously to the Jewish people. One afternoon, an angel appeared to Corneilus in a vision and spoke to him.

Cornelius was gripped with fear at the sight of the angel. “What is it, sir?” he replied.

“Your prayers and almsgiving have ascended as a memorial offering before God,” the angel said. “Now send some men to Joppa and summon one Simon who is called Peter. He is staying with another Simon, a tanner, who has a house by the sea.” Then the angel disappeared. Cornelius immediately sent two of his servants and a soldier to Joppa to find Peter.

On the next day, Peter was on his way to the terrace on the roof of the home where he was staying to say his prayers at noon. He was hungry, and he was thinking about food, and he fell into a trance. He saw a vision of animals, reptiles and birds, and he heard a voice tell him to eat whatever he wanted.

He said to the voice, “Certainly not, sir. For never have I eaten anything profane or unclean.”

The voice said, “What God has made clean, you are not to call profane.” This happened to Peter three times before the vision ended. As he was wondering what the vision meant, there was a knock on the door of the house. The servants of Cornelius had arrived. The voice that had spoken to Peter in his vision spoke to him once again.

“There are three men here looking for you. So get up, go downstairs, and accompany them without hesitation, because I have sent them.”

Peter answered the door and saw the three men the voice had told him about.

“I am the one you are looking for,” he told them. “What is the reason for your being here?” The men explained why they had come looking for Peter. Peter and some of the other Christians went with the visitors.

When Peter met Cornelius at his house, he said, “You know that it is unlawful for a Jewish man to associate with, or visit, a Gentile, but God has shown me that I should not call any person profane or unclean.”

Peter told Cornelius about Jesus and how he had been raised from the dead by God. After Peter baptized Cornelius and the members of his household they rejoiced and praised God.

READ MORE ABOUT IT:
Acts 10

Q&A
1. What did the angel tell Cornelius about his prayers?
2. What happened after Peter baptized Cornelius?

Bible Accent: World Synod of Bishops on the Bible

The members of the World Synod of Bishops met in Rome recently to discuss the Bible.

At the conclusion of the meetings, the bishops developed a list of propositions that would establish guidelines so Catholics would be able to read the Bible and put its teachings into practice. Proposition 33 says, “Love of the Bible is a grace of the Holy Spirit that permeates the entire life of the believer.”

We hear the Bible read to us when we attend Mass, but the bishops want every one of us to read the Bible regularly, alone and with our families. The bishops also have extended an invitation to children, teens and young adults “so that they may find in the word of the Lord Jesus a response to what they seek.”

Read your Bible today and every day.

Honoratus (350-429) was born into an important non-Christian Roman family that lived in Gaul, which is now France. As young men, he and his brother Venantius became Christians and wanted to separate themselves from the trappings of the world and live only for Christ. They found St. Caprasius, a religious hermit, who agreed to be their teacher. They then set sail for Greece, hoping to live in solitude.

After Venantius became sick and died, Honoratus settled on the island L√©rins. Pilgrims came there to learn from him, so he built a monastery. The men who lived in the monastery earned a reputation for being devout and generous.

Honoratus became the Archbishop of Arles in 426 and died three years later. We honor him on Jan. 16.