Peter sees a vision and baptizes the gentiles - Catholic Courier Word had reached the apostles and other believers in Judea that the apostle Peter had done something outrageous while visiting the town of Joppa.

Not only had Peter agreed to enter the home of a gentile in Caesarea, but he also preached the Gospel to the man’s family and friends and baptized them!

The apostles and the other believers were shocked. Jews were not allowed to associate with gentiles. Peter’s friends demanded an explanation.

Peter said that  while he was visiting in Joppa when he had a vision. He described seeing a large sheet in the sky.

“Looking intently into it, I observed and saw the four-legged animals of the earth, the wild beasts, the reptiles, and the birds of the sky,” Peter said. “I also heard a voice say to me, ‘Get up, Peter. Slaughter and eat.'”

Peter said he refused, “because nothing profane or unclean has ever entered my mouth.”

The voice said in reply, “What God has made clean, you are not to call profane.”

After hearing this three times, the vision ended, Peter said. Then the Holy Spirit told him to go with the men who were coming to see him.

“The Spirit told me to accompany them without discriminating,” Peter explained.

So Peter and six other believers went with the three gentiles to the home of Cornelius, a gentile who had found favor with God. Peter learned that an angel of God had visited Cornelius and told him to summon Peter, who would speak word that would save Cornelius and his household.

“As I began to speak, the Holy Spirit fell upon them as it had upon us at the beginning,” Peter said, “and I remembered the word of the Lord, how he had said, ‘John baptized with water but you will be baptized with the Holy Spirit.’ If then God gave them the same gift he gave to us when we came to believe in the Lord Jesus Christ, who was I to be able to hinder God?”

1. What was the vision Peter had?

2. Whose house did Peter go to?

“You are well aware that from early days God made his choice among you that through my mouth the gentiles would hear the word of the Gospel and believe,” he said. “And God … bore witness by granting them the Holy Spirit just as he did us. … Why, then, are you now putting God to the test by placing on the shoulders of the disciples a yoke that neither our ancestors nor we have been able to bear?”

“It is my judgment, therefore, that we ought to stop troubling the gentiles who turn to God,” he said, “but tell them by letter to avoid pollution from idols, unlawful marriage, the meat of strangled animals, and blood.”

“If you keep free of these, you will be doing what is right,” they told the gentiles. 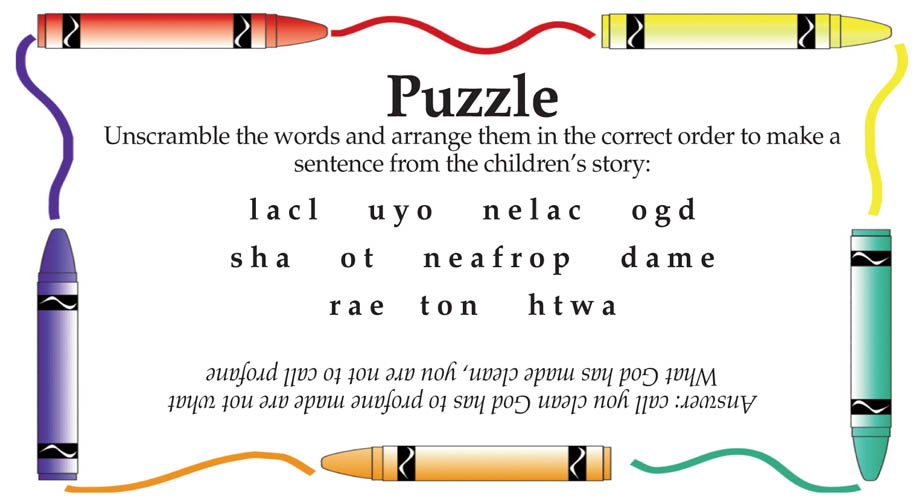