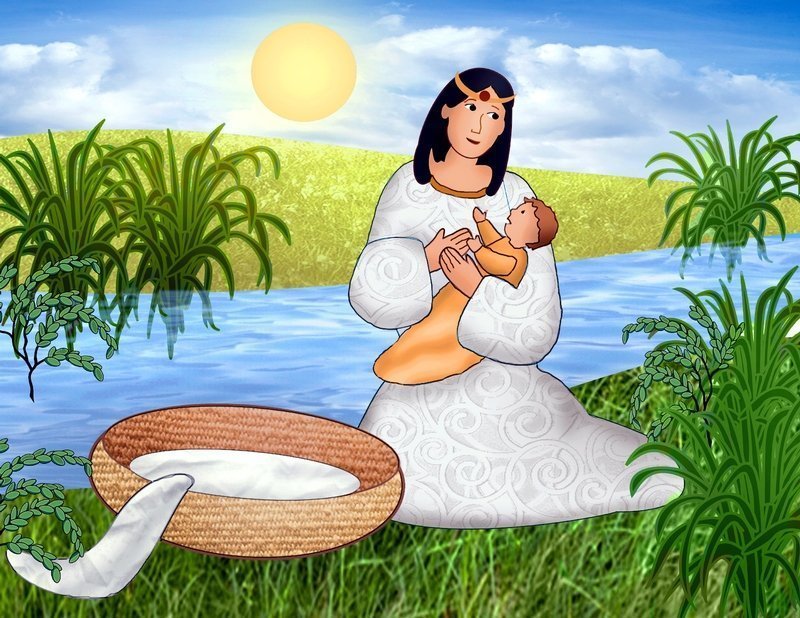 The descendants of Jacob and his 12 sons were living in Egypt. As the years went by, the Israelites multiplied and there were more of them in Egypt than the Egyptians themselves.

The pharaoh did not like this, so he made the Israelites slaves. He also wanted to cut down on the number of Israelites in Egypt, so he ordered his men to kill the Israelites’ newborn male babies.

During this time, there was a Levite woman who gave birth to a son. She hid him until he was 3 months old, then she knew that he would be in danger of being found and killed.

Afraid for her baby’s life, she decided to take extreme action. She took a basket made of papyrus — a tall plant that is like grass — and covered it with a material called pitch to make it waterproof. She placed the baby in the basket, and then put the basket in the Nile River among the reeds. The woman’s daughter watched the basket from a distance to see what would happen to her baby brother.

The pharaoh’s daughter came to bathe in the river. When she was in the water, she noticed something in the reeds and sent one of her servants to get it for her. When she opened the basket, she was surprised to find a crying baby inside.

“It is one of the Hebrews’ children,” she said, looking at the baby with pity.

Just then, the baby’s sister came up to the pharaoh’s daughter.

“Take this child and nurse him for me, and I will pay your wages,” pharaoh’s daughter told the woman, having no idea that the woman was the baby’s own mother.

When the child was older and didn’t need to be nursed anymore, the woman brought him back to the pharaoh’s daughter, who adopted him. She decided to name the child Moses, she said, because she drew him out of the water.

2. Who was the baby placed in the basket?