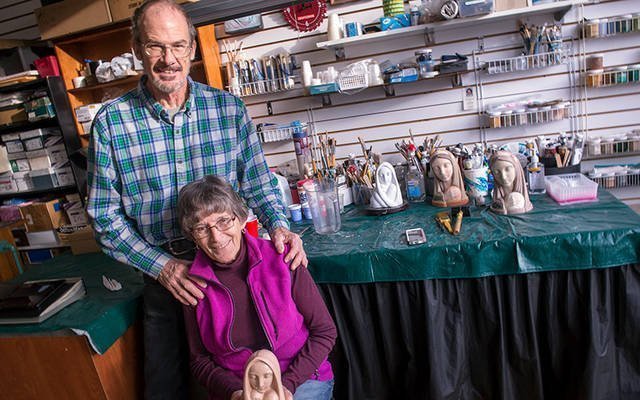 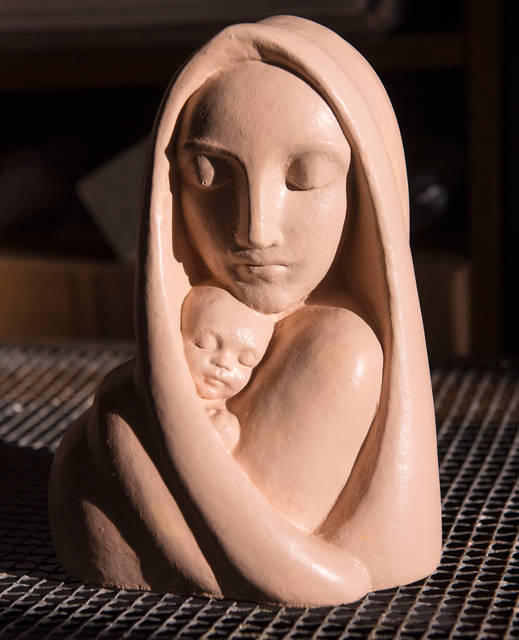 “God with Us” is a sculpture that was created by Maryknoll Sister Marie Pierre Semler. (Courier photo by John Haeger)

PHELPS — Sister Marie Pierre Semler joined the Maryknoll Sisters in 1925 with dreams of traveling to China as a missionary, but the discovery of a heart murmur dashed those dreams.

Instead she began working in the congregation’s art department, and throughout the next 68 years she produced more than 2,000 works of art, many of which were sent overseas with Maryknoll missionaries, according to her nephew, David Hoysic.

“Her artwork went around the world. She didn’t, but yet in a sense she did,” Hoysic said.

Although Sister Semler passed away in 1993, Hoysic and his wife, Mary, have worked hard to ensure that her artwork still reaches people. The Hoysics, who are landscapers by trade, maintain a studio in Phelps, where they reproduce Sister Semler’s artwork. Not only do they sell these reproductions, but they also travel around the country exhibiting Sister Semler’s original pieces at host parishes and religious congregations.

“About once a month or so they give us another piece of artwork, and we just put it up in our church and display it for people,” explained Father Peter Van Lieshout, St. Peter’s pastor.

The artwork is displayed each month on a shelf above the rack of votive candles in the church. The display was started nearly two years ago under former pastor Father John Gagnier, who said sales of the votive candles increased sixfold after the display began.

Not only was Sister Semler a prolific artist, but she also wrote poems and reflections to accompany each of her creations. Each time the Hoysics bring a new piece of artwork to St. Felix Church, they also provide a copy of the reflection she wrote to go along with each piece, and Father Van Lieshout puts these in the parish bulletin.

“When you read those you know what she was thinking,” Mary Hoysic explained. “A lot of her pieces are meditative.”

Sister Semler used a variety of different media to create these meditative works. Sister Semler, who was baptized at St. Mary of the Assumption Church in Scottsville and grew up in Chili, showed artistic talent even when she was a child, according to David Hoysic. His grandmother, who was Sister Semler’s aunt, saved some of the Sister Semler’s early drawings and later gave them to the Hoysics, who display them in their studio.

As a teen Sister Semler took two night classes in illustration and composition at Rochester Institute of Technology, which at that time was known as Mechanics Institute. After becoming a Maryknoll sister, she created oil paintings that were used as illustrations in The Field Afar, now called Maryknoll Magazine.

Her paintings also were turned into laminated plaques and holy cards that were sent around the world. The Hoysics have found receipts detailing the Vatican’s purchase of 80,000 of these cards in the 1940s and learned the cards were given to soldiers fighting in World War II. At one of their exhibits they also met a French priest who said every member of his ordination class in France received a holy card depicting one of Sister Semler’s paintings.

“He always thought it was a French artist,” David Hoysic said.

Sister Semler was a prolific painter until 1941, when a broken wrist left her unable to paint. Not one to be deterred, Sister Semler discovered she was able to sculpt clay using only her left hand, Mary Hoysic said.

“That kind of sparked a new medium, and she was excited about creating in clay,” she said. “Once she went to sculpting she never went back to painting.”

Sister Semler created countless stonework sculptures throughout the next few decades before leaving that medium to begin working with wood.

“She walked through the woods (on the Maryknoll grounds) every Sunday and gathered the wood,” David Hoysic said, noting that Sister Semler saw the beauty in the nature around her and frequently created art out of tree roots and other natural things she found on her walks.

The Hoysics began exhibiting Sister Semler’s work shortly after her death. Visitors to the exhibits were moved by her artwork and often asked if they could buy her pieces, so the Hoysics began making prints of her drawings and paintings and eventually took a course to learn how to reproduce her sculptures.

“People wanted something of hers,” David Hoysic explained.