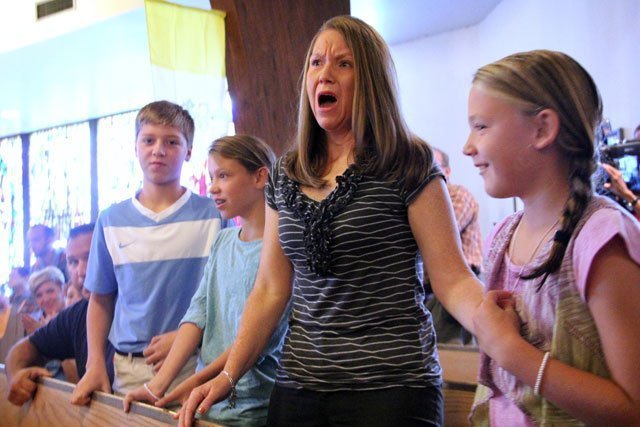 Bernadette Bowes of Philadelphia reacts Sept. 13 to hearing that her family will greet Pope Franics upon his arrival in Philadelphia. The announcement was made after a morning Mass at St. Christopher Church.
By Lou Baldwin
Catholic News Service
PHILADELPHIA (CNS) — Rick and Bernadette Bowes and their children — Matthew, Riley and Gabrielle — got quite the surprise Sept. 13 at their parish church: They learned they’ll get to meet Pope Francis.
When he alights from his plane in Philadelphia Sept. 26, the family will be right there to officially greet him.
Donna Crilley Farrell, executive director for the World Meeting of Families, announced the family had been chosen at the conclusion of the 10:30 a.m. Sunday Mass at St. Christopher Church in the Somerset section of the city.
The instant applause of parishioners was clearly from the heart.
Rick and Bernadette and their children typify a solid Catholic family, and family is the focus of the World Meeting of Families in Philadelphia. The international gathering was the initial impetus for the pope to visit the U.S. He will attend the closing events, including the celebration of Mass Sept. 26 on Philadelphia’s Benjamin Franklin Parkway.
Seven years ago Rick, who was a police officer with the Philadelphia Police Department’s highway patrol division, was seriously wounded by a felon who had just killed another officer. It was only recently that he was sufficiently healed to take a new position with the Pennsylvania Office of Attorney General.
It is not, however, because of heroics in the line of duty that Rick and his family were chosen.
"They are an exceptional Catholic family, active in the parish and the community," said St. Christopher’s pastor, Msgr. Joseph Garvin, who nominated them for the honor. "We do have many exceptional families in the parish, but they are the ideal Christian family."
Their faith goes way back. Rick is a graduate of Ascension of Our Lord School and Northeast Catholic High, both now closed, while Bernadette graduated from St. Martha School and Archbishop Ryan High. The kids are in the seventh, sixth and third grades at St. Christopher.
Msgr. Gavin recalls that after Rick’s literal brush with death, the parish sent a check to assist with the bills for his lengthy recovery. Bernadette sent it back to Msgr. Garvin with the family’s gratitude and thanks, saying there must be people in the parish who needed it more than they did.
For the announcement of the Bowes family’s selection to greet the pope, Rick had been given a heads-up by Msgr. Garvin just to make certain they would all attend that particular Mass. Bernadette, who thought maybe the family was going to be asked to bring up the offertory gifts, burst into tears at the announcement. She really was in need of a bit of happy news because she had just buried her mother, Joan McLaughlin. It was expected but still a major sorrow.
Rick still can’t quite get his head around his family getting to greet Pope Francis.
"For my part, I think he is going to be a saint in the future and we are meeting him," Rick told CatholicPhilly.com, the news website of the Archdiocese of Philadelphia. "He is so forward thinking, bringing the church up to modern times."
Family is all important to Rick and Bernadette.
"We lean on each other and we come together as a unit," Rick said. "We always try to pull each other up and be the best person we can be. That’s what we try to teach to our children. Even in our darkest times, faith was there for us; we prayed when things didn’t look good."
Rick’s recovery took five years and included seven surgeries and three hospital stays and he was not really able to do much to help Bernadette with their three young children.
Now he looks on the bright side. His police work was mostly on the 6 p.m. to 2 a.m. shift with lots of weekend work. Now he works 9 to 5, no weekends.
"To me everything happens for a reason," he said. "Now I’m home every day for the kids. I have a normal life."
Bernadette prayed throughout Rick’s long recovery. When she dropped the kids off to school, she would stop in at the church. Her prayer was not so much supplication as thanksgiving for the miracle her husband was still alive.
"I look back and am in awe that we got through," she said. "I really believe that God gave me the strength to do what I had to do. Your religion is the basis for your morality and your values. That is what is taught at St. Christopher’s. That is what I want my kids to learn and grow up with."
Bernadette and Rick think there are many others more deserving of the honor to greet Pope Francis, and it is humbling.
Their kids of course are excited. Speaking for the three, Gabrielle, the youngest, said: "I’m so happy I couldn’t believe it."
As for her message to Pope Francis, it is one universally shared in the Philadelphia Archdiocese: "Welcome to Philadelphia. I hope you enjoy it."
– – –
Baldwin writes for CatholicPhilly.com, the news website of the Archdiocese of Philadelphia.
Copyright © 2023 Catholic News Service, Inc. All rights reserved. Linking is encouraged, but republishing or redistributing, including by framing or similar means, without the publisher's prior written permission is prohibited.