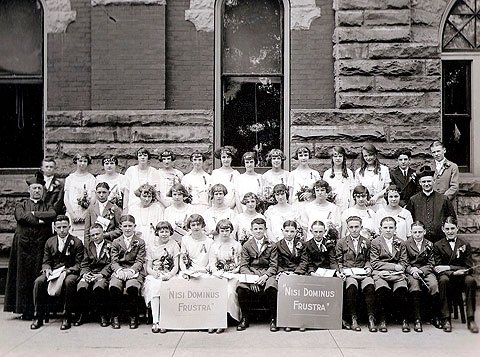 If you possess photographic reminders of your — or your loved ones’ — years at St. Ann School in Hornell, you might be able to help uphold the school’s proud history.

Peggy Lynch, a 1970 St. Ann graduate, has undertaken an effort to assemble a complete photo archive of the school’s graduating classes. Although there’s still a way to go, Lynch said many contributions of personal photos have already helped reduce the lengthy list.

Anybody willing to lend photos or memorabilia may contact Lynch at 607-324-3640 or irish2417@verizon.net. Or, they may mail photos to her at 24 Erie Ave., Hornell, NY 14843. Either originals or e-mailed photos are acceptable. Lynch said she will return any original as soon as she makes a copy of it.

Lynch said she got the idea for the archive after borrowing some graduation pictures from St. Ann School for an online project. She subsequently spoke with Lisa Dirlam, St. Ann’s principal, and both were enthused about the possibility of creating an archive.

"She mentioned that wouldn’t it be nice to have all of the pictures. I just ran with it," Lynch said. "I have enjoyed tracking down the pictures. In the process I have also been loaned other pictures and memorabilia that I have copied."

Copies of the pictures are framed and displayed in the school hall.

"I am not doing it for any other reason than the school has been a fixture in Hornell for over 125 years and its history, told through its students, needs to be preserved," Lynch stated.

Lynch is close to St. Ann School not only in terms of loyalty but also physical distance: She grew up across the street from the school and still lives there.

"My parents and my siblings were also graduates," she added.