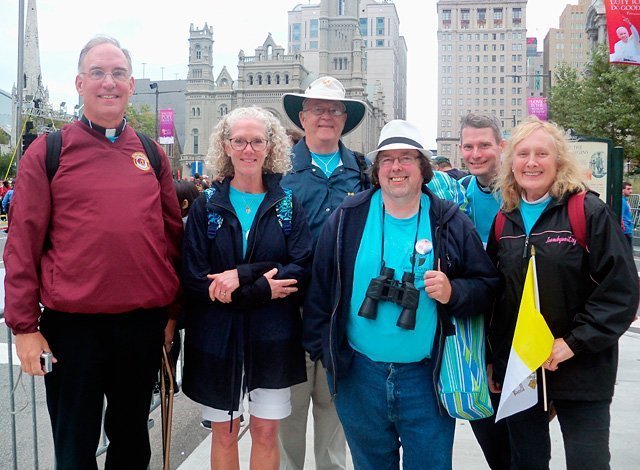 With 1,000 people still ahead of them as Mass began, the pair ended up watching the liturgy on an iPhone as they listened through a shared pair of headphones.

And yet, there was no disappointment, they said. Daniel had the chance to ride a subway for the first time, and, more importantly, they were part of that moment in history, Kevin Spears said.

"The amazing part was to be waiting in line with thousands of people from all over the world," said Daniel, who is homeschooled. "The pope is a really good leader. To be able to get near him … the experience was still amazing."

On Oct. 11, the Spearses and other St. Kateri parishioners who experienced the pope’s visit firsthand and those who experienced it through media coverage gathered at the parish center for a discussion called the "Francis Effect." St. Kateri was one of a few diocesan parishes to organize a bus trip from the Rochester Diocese to Philadelphia, said Pastoral Associate Donna Walker. Of the parish’s group of 52 pilgrims, several were from other parishes, she added.

"It was a true pilgrimage," Walker noted.

One pilgrim from another parish was Richard Decker of Lyons who attends St. Michael Church in Newark, which is part of St. Joseph the Worker Parish. He says that when people ask him about going to see the pope in person, words fail him.

"I can tell you where we went and how we did it," Decker said. "It must be an experience of the spirit. There’s no way to put it in words."

He noted that a highlight of the trip to Philadelphia was receiving Eucharist after thinking he and all the throngs of people around him would not receive it as they watched the Mass on a Jumbotron. His group had walked about five miles to get as close as they could to the Mass site, he noted.

"It really brought a tear to my eye … I was going to receive Christ," Decker said about receiving Communion. "No matter where we were … we were part of something bigger than ourselves."

Walker said she had never before seen people begging to receive the Eucharist.

"With their arms outstretched … it was the most moving experience of Communion," she said.

Sharing such experiences with his own parishioners as well as people from around the diocese was powerful, noted Basilian Father Paul English, pastor of St. Kateri.

"And to be part of this public Christianity, it means a lot to me," he added. "We really are needing Pope Francis. God gives us what we need when we need it."

During the Oct. 11 gathering, Father English also presented a slideshow of photos from the journey that had been taken by parishioner Dick Lawrence. Since none of the parishioners who made the trip are fluent in Spanish, he also read a portion of the pope’s Sept. 27 homily in English so those who had been in Philadelphia could better reflect on what they had been a part of.

The homily had touched on showing love and being Christ for each other, he said, in such small gestures of family life as a giving a hug and a smile or getting someone a glass of water. After reading from the homily, Father English asked those in attendance to break into groups of three to reflect on the pope’s words.

"Pope Francis touched the lives of people in such a spiritual way," he said. "And that is a good thing that he is doing — getting people together. This is part of the effect (of his visit)."

Patty Sheridan said when she realized the St. Kateri group would not see Pope Francis up close, she had wondered why she had gone on the trip. But then, she saw Father English bless someone. When she asked him about the woman, Father English said she had asked him to hear her confession, Sheridan said.

"This is why I’m here," Sheridan said she understood in that moment. "I get to see my pastor do something so beautiful and so naturally. … We were Eucharist for one another."