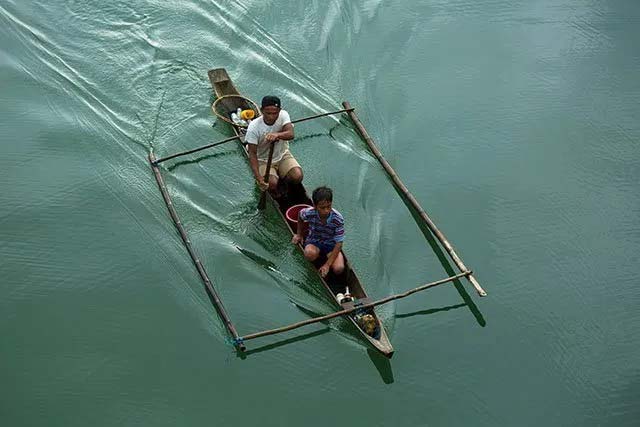 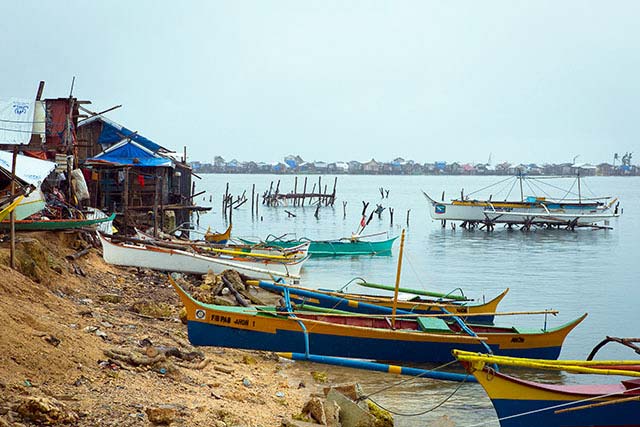 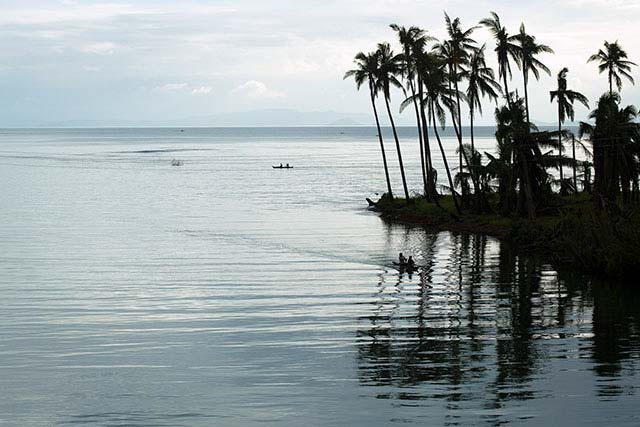 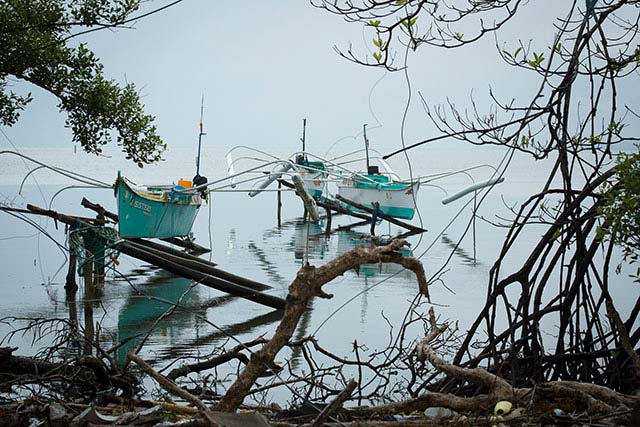 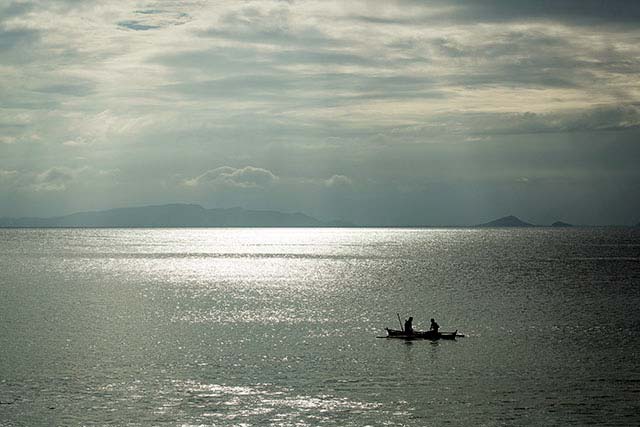 Fishermen are seen in a boat near Guiuan, Philippines, Feb. 9.Many fisherman lost their boats in Typhoon Haiyan last November. (CNS photo/Tyler Orsburn) 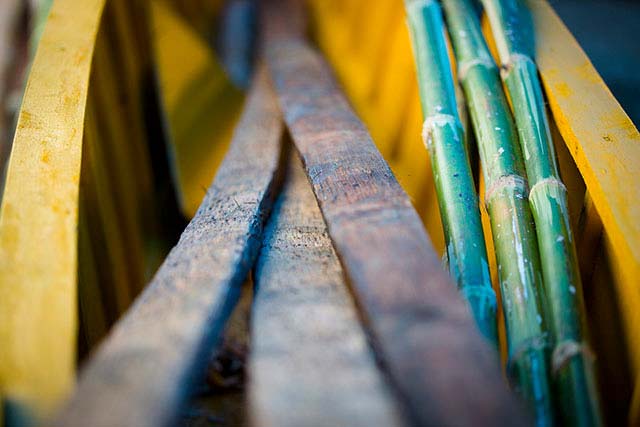 Wood and bamboo sit inside a new boat in Barangay Otol, a community in Tolosa, Philippines, Feb. 8. (CNS photo/Tyler Orsburn) 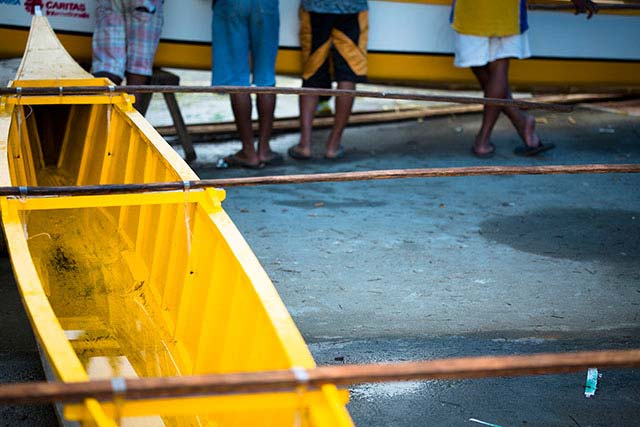 Fishermen in Barangay Otol, a community in Tolosa, Philippines, install a motor in a new boat Feb. 8. (CNS photo/Tyler Orsburn) 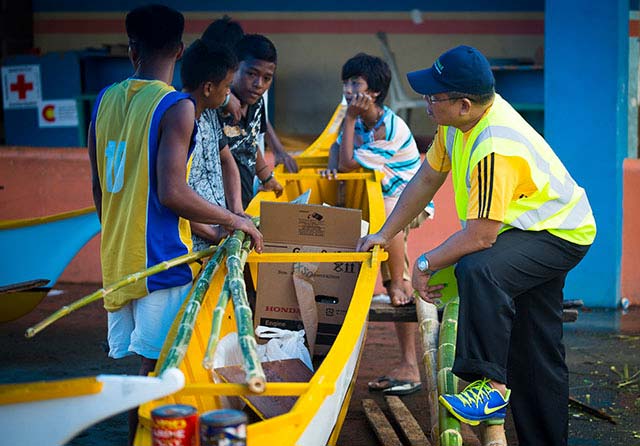 Artemmio Cincoinin, right, a civic leader in Barangay Otol, a community in Tolosa, Philippines, talks with young fishermen as they prepare a new boat Feb. 8. The community received five new boats that will affect the livelihood of 25 families. (CNS photo/Tyler Orsburn)

TOLOSA, Philippines (CNS) — It’s been three months since fisherman Ray Bitoy has been on the ocean doing the one thing he has loved for as long as he can remember.

But by Feb. 16, Bitoy planned to be at sea again, catching fish to sell to support his family of seven. He will participate in a pilot program that is providing about 80 fishermen with new sturdy wooden boats and the opportunity to rebuild their vital fishing businesses.

Bitoy, 40, was one of dozens of fishermen along the island of Leyte’s Pacific coast whose livelihoods were disrupted by Typhoon Haiyan Nov. 8 as it smashed almost everything in its path, fishing boats included.

“I have had no income since the typhoon,” Bitoy said in his native Waray language through a translator.

Bitoy told Catholic News Service he was eager to continue fishing using only hooks, a method he learned from his father and grandfather. He is teaching his two sons the same method.

The boat Bitoy will use is one of 16 provided to struggling fishing communities under the program developed by Caritas Internationalis and the social action arm of the Catholic Bishops’ Conference of the Philippines. Bitoy’s community, known as Barangay Otol, received five boats. Nearby communities also received identical bright-white-and-yellow boats, 16 feet long.

Father Oscar Florencio, rector of St. John the Evangelist Seminary in the Palo Archdiocese, who helped facilitate the project, explained that up to five fishermen will share each boat. The men will coordinate the times for each boat’s use.

The priest said carpenters in the municipalities of Carigara and Capoocan in northern Leyte were hired to build the boats. Both communities were devastated by Haiyan, leading to reduced work for the carpenters.

“(All of the) communities are happy because they will have some ability to continue their livelihood,” Father Florencio told CNS.

“If this project will really be successful, then the chances would be great of adding more boats for people,” he said. “We hope that kind of helping each other will be fruitful in the future.”

The program also provides funds so the fishermen can replace lost fishing equipment from local businesses, providing another boost to the economy in the typhoon zone.

Fisherman Efren Dapitan, 45, was among several men and teenagers preparing boats for their inaugural voyage as a light rain fell on the community Feb 8. He took a break from his work to tell CNS that his new boat is an improvement over the one he lost to Haiyan.

“Those were boats with paddles so we could only go out so far. But this time these are motorboats, and maybe we can go farther,” he explained.

Dapitan, who has been fishing for 30 years, also planned to test his skiff’s ability to carry fishing nets in addition to traditional hooks. If his experiments work, Dapitan said he would be able to haul in larger catches to support his family, including his wife and seven children, ages 3 to 15.

Both men said that before the boats are launched, they will be blessed during a prayer service Feb. 16 by the pastor of the local Catholic church. The boats will then be transported about a half-mile to the shore, where the men will set off into the sea that has become their home.

Barangay leader Artemio Cinco watched as the men carefully fitted balancers and other aids into the vessels. Half of the men in the community of 1,048 people earn all of their income from fishing, he said.

“This is a big help. This will mean much more (income) for them. This is new life,” he said, a smile coming to his face.