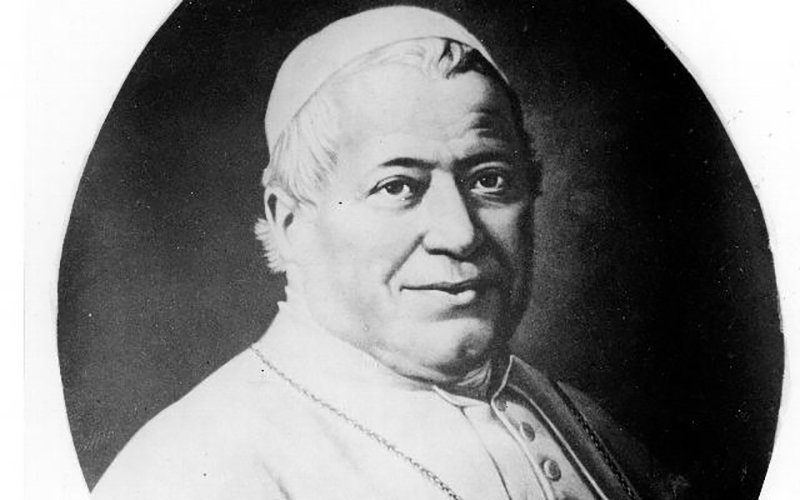 Pope Pius IX is pictured in an undated portrait. He convoked the First Vatican Council in 1869. (Photo by CNS)

An eminent passenger departed at night from Rome’s Quirinal Palace Nov. 24, 1848, unrecognizable as his carriage proceeded. He resembled any mid-19th-century Italian country priest.

It was the historic night Blessed Pius IX fled Rome in disguise, not knowing what the future held.

This was the successor of Peter and ruler of central Italy’s Papal States. If he returned, would Pius (Pio Nono) continue as that region’s virtual king?

His flight’s drama is conveyed compellingly in “The Pope Who Would Be King: The Exile of Pius IX and the Emergence of Modern Europe,” a 2018 book by David I. Kertzer, a Brown University professor of Italian studies.

“Thousands of Romans had besieged the Quirinal” about a week earlier, “calling for a government of their choosing and an end to priestly rule,” Kertzer wrote. By contrast, earlier that year “a huge crowd bellowing ‘Viva il papa!’ had poured into Quirinal Square.”

The pope did not lack all support. Yet now he effectively was “a prisoner, his palace surrounded by hostile” guardsmen, Kertzer observed.

In Kertzer’s recounting, the pope planned to exit the palace via a secret passage, while the French ambassador to the Holy See remained alone in the pope’s receiving room, talking aloud. Thus, anyone outside might suspect Pio Nono still was there, conversing.

The plan succeeded. The pope passed through a palace gate, headed toward safety in Gaeta, a town near Naples.

Pio Nono’s flight highlights the threat sensed in 1848. It wasn’t the first time a campaign for Italy’s unification meant turbulence for the Papal States. Their decline occurred over time.

The pope returned to Rome in April 1850 under French protection. His temporal rule was not yet a reality confined to the past. His flight, however, presaged tumultuous times ahead during Pio Nono’s long papacy, which lasted into 1878.

I tell this story here because Pio Nono convoked the First Vatican Council in 1869. Continued pressures upon the Papal States surely influenced the attitudes of many council participants.

Jesuit Father John W. O’Malley, a Georgetown University church historian, wrote that for 19th-century popes “the struggle to maintain the (papal) states became a major focus in the struggle against the modern world” (“What Happened at Vatican II”).

But wait! Wasn’t it the Second Vatican Council that took up the modern world as a key concern?

Between Vatican I and Vatican II, telephones, television, auto and air travel, democracy and an accent on human rights spread broadly. The modern worlds of 1869 and the 1960s were so unalike!

Still, “the church has always had the duty of scrutinizing the signs of the times and of interpreting them in the light of the Gospel,” Vatican II affirmed in its 1965 “Pastoral Constitution on the Church in the Modern World.”

It said, “The joys and the hopes, the griefs and the anxieties” of the world’s people are the joys, hopes, griefs and anxieties of Christ’s followers too.

Actually, the church’s relationship with the “modern world” is a perennial concern, whatever the century.

Not all church leaders in 1869 perceived their “modern world” identically. One sign of their times, however, reflected the Papal States’ plight, states dating back in one form or another more than 1,000 years. How many at Vatican I felt as if the world was shifting, negatively, under their feet?

The First Vatican Council adjourned in 1870. It is remembered above all for addressing papal primacy and declaring that the pope can teach infallibly under certain conditions.

But Vatican I never reconvened after developments related to the 1870 Franco-Prussian War spelled an end to the Papal States.

After his humiliating 1848 exile, Pio Nono seemed to grow increasingly suspicious of new social currents. He also never accepted the view that abolishing the pope’s temporal power “would be good for the church,” according to Irish historian Eamon Duffy in the book “Saints and Sinners.”

The pope’s temporal power “over the Papal States,” Duffy commented, had been “central to Pio Nono’s religious vision.”